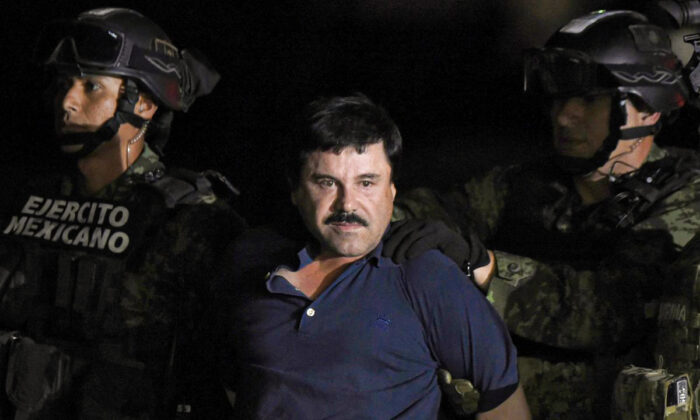 SAN DIEGO—As Mexican and U.S. forces closed in on Joaquin “El Chapo” Guzmán Loera in the winter of 2014, they set out first to find the man they hoped would unlock many of the drug kingpin’s secrets, and ultimately his whereabouts.

Characterized as Guzmán’s personal assistant, Mario Hidalgo Arguello was intricately involved in the fugitive’s comings and goings. Hidalgo’s nickname in the Sinaloa cartel was “El Nariz,” named for his prominent nose, which made him easily identifiable when authorities tracked him down at a party in Culiacán one night and demanded a tour of Guzmán’s hideouts.

Indeed, Hidalgo led the Mexican Marines and a U.S. drug agent to the safe house where Guzmán was holed up, but he narrowly escaped through a tunnel under the bathtub.

Still, authorities stayed on the trail, capturing Guzmán a week later at a Mazatlán hotel.

While Hidalgo’s legacy will be forever linked to the hunt for one of the world’s most wanted drug lords, his official criminal record is silent on the matter and instead lists a single marijuana trafficking conviction.

On Monday, a San Diego federal judge sentenced Hidalgo to seven years in prison in the case, which involves a conspiracy to import marijuana aboard a San Diego yacht. U.S. District Court Judge William Hayes followed the joint recommendation of prosecutors and the defense in handing down the sentence—a departure from the 10-year mandatory minimum term he was facing.

He is not a U.S. citizen and will likely be deported to Mexico when his term has been completed.

Hidalgo was arrested on a provisional U.S. warrant in March 2017 while in Mexican custody and was quietly extradited to San Diego in January 2020 to face charges brought by a 2015 San Diego federal grand jury.

He pleaded guilty in September 2020.

According to this plea, Hidalgo admitted to being an organizer of an agreement between at least five people to import about 6 tons of marijuana into the United States in 2012.

Hidalgo’s co-conspirators bought a boat, the International Star, in San Diego in October 2012 and docked it in National City to make repairs and improvements, according to the plea. The boat was renamed Out Hook’n.

It departed from San Diego at the end of November for Cabo San Lucas, Mexico. While off the coast, it was loaded with marijuana from another boat. Hidalgo was on one of the vessels at some point to coordinate the transfer of drugs, the judge stated.

Out Hook’n returned to San Diego on Dec. 17.

Earlier court filings by prosecutors said U.S. Drug Enforcement Administration agents watched as suitcases were offloaded from the boat into an SUV at H&M Landing in Point Loma. The boat was then taken to Long Beach, where agents saw more bundles taken off into a rented box truck, prosecutors said.

The plea does not provide specifics about Hidalgo’s role in the conspiracy, other than that he was a leader.

Little about his case has been filed publicly; sentencing memorandums from prosecutors and the defense—documents that usually provide greater insight into the offender and the crime—were apparently filed under seal, as they are in many drug cartel cases.

In comments to the judge Monday, Hidalgo said he was one of seven children raised by poor, day-laborer parents.

“You grow up and what you keep thinking about is what it’s like to have money,” he said through a Spanish interpreter. “I grew up in a city that’s known to have narco culture. It is not easy.”

Hidalgo’s defense attorney Sandra Lechman told the judge that the events surrounding his arrest in Culiacán were “very traumatizing,” with both she and Hidalgo saying separately that his wife was assaulted.

Much of the drama surrounding Guzmán’s capture, and the significance of Hidalgo’s role, was revealed in testimony during Guzmán’s criminal trial in Brooklyn at the beginning of 2019.

Hidalgo had compromised not only the one house from which Guzmán escaped, but the whole network of hideouts and warehouses in the stronghold of Culiacán.

“My or our idea was to flush him out of the city…to make it hard for him to ever come back to Culiacán,” Vazquez testified.

It worked. Guzmán is spending a life sentence at a maximum security prison in Colorado.