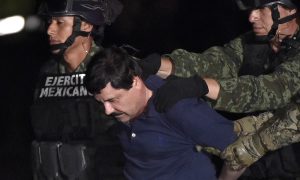 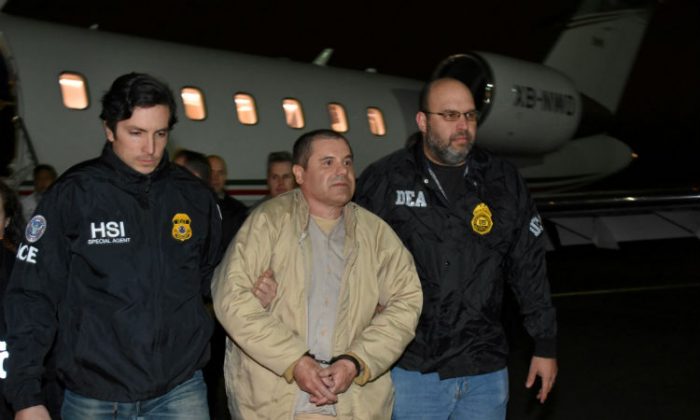 Mexico's top drug lord Joaquin "El Chapo" Guzman is escorted as he arrives at Long Island MacArthur airport in New York, on Jan. 19, 2017, after his extradition from Mexico. (U.S. officials/Handout via Reuters/File Photo)
US News

NEW YORK—The son of one of the Sinaloa cartel leaders, Vicente Zambada-Niebla, wanted to quit the world of drug-trafficking since he was young. He had become tired of the life of violence being the “right-hand man” of his father Ismael Zambada Garcia or “Papa Mayo,” who was one of the bosses of the notorious cartel.

In 2007, when Zambada-Niebla was about 32, he finally decided to ask permission to retire from the cartel and live his own life. At the time, he was in charge of drug trafficking for his father and his father’s partner, who he refers to as “mi compadre” or “my buddy or my son’s godfather,” Joaquin “El Chapo” Guzman, making him a more wanted figure with the Drug Enforcement Authority (DEA).

It was at that time when Guzman offered to help him, proposing that he would reach out to his “contacts” in the DEA to see whether they were interested in meeting with Zambada-Niebla.

About two years later, Zambada-Niebla, who is also known as El Vicentillo, had a secret meeting with DEA agents in Mexico. It is unclear whether it was Guzman who helped set up the meeting. The meeting ended at 2 a.m. and he was arrested by Mexican authorities two hours later.

Zambada-Niebla was extradited to the United States in 2010 and has been cooperating with the DEA since 2013, after he pleaded guilty to participating in a vast narcotics trafficking conspiracy. It was this cooperation and desire to leave the cartel that led him to the courtroom on Jan. 3 and 4, to testify against his father, the Sinaloa cartel, and Guzman—the man who was once his mentor.

The trial of Guzman had resumed after a short recess. After weeks of hearings since November last year, details of drug trafficking, weapon upgrades, cartel rivalry, and bloodshed continue to flow out of the courtroom as witness after witness takes the stand to testify against the notorious drug cartel boss.

Guzman and Zambada Garcia have been charged with 17 criminal charges, including running a criminal enterprise, drug trafficking, use of firearms, money laundering, and murder, according to the indictment. While Guzman has been arrested and is facing trial, Zambada Garcia is still at large.

Recounts of Smuggling, Murders, and Wars

Wearing his dark blue prison outfit, Zambada-Niebla recounted stories of how drugs were smuggled across borders, how his father paid millions to corrupt Mexican government officials, and how hundreds of AK47s, pistols, and other weapons dubbed “police killers” along with “millions in ammunition” were transported into the country. He also described elaborate details of bloody wars against enemies, kidnappings, torture, and murders, and a failed attempted-murder plot on José Luis Santiago Vasconcelos, who previously served as the assistant attorney general at the Organized Crime Specialized Investigation Office.

Vasconcelos ran afoul with the Sinaloa cartel after he arrested Iván Archivaldo—Guzman’s son—and was seen targeting the cartel’s leaders. The hitmen who were sent to kill him were arrested before they could carry out the attack and their bazookas were confiscated.

Meanwhile, calls between Guzman and various associates were played to the jury, and photos were exhibited. One photo showed Guzman on the dance floor with an unknown woman, while a diamond-studded gun poked out from his waistband.

During cross-examination, the now 43-year-old star witness also recounted the time where he visited Los Pinos—the Mexican White House—to ask a high-ranking official, General Roberto Miranda, for a favor—to stop raiding his mother’s and sister’s businesses. At the time General Miranda was one of the guards for the Mexican president. Zambada-Niebla did not say whether the general was being bribed at the time but he made it clear that then-President Ernesto Zedillo was not.

Guzman’s trial will continue next week. While Zambada-Niebla, who faces a maximum sentence of life in prison, is still awaiting sentencing.