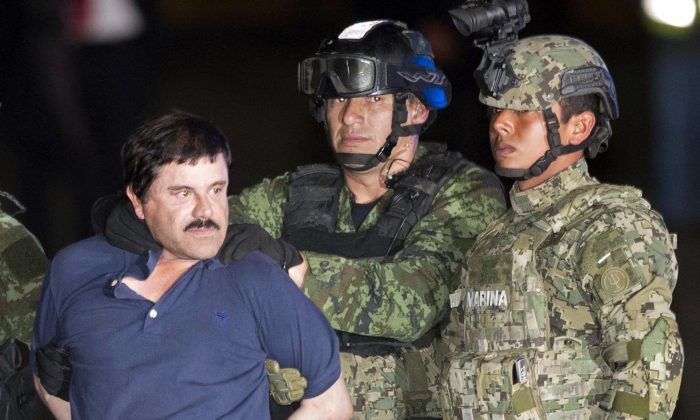 Joaquin "El Chapo" Guzman is made to face the press as he is escorted to a helicopter in handcuffs by Mexican soldiers and marines at a federal hangar in Mexico City, Mexico, on Jan. 8, 2016. (AP Photo/Eduardo Verdugo)
Americas

Convicted Mexican drug lord Joaquin “El Chapo” Guzman, who previously escaped from prison twice and is fighting to avoid being sent to the United States, was transferred to a prison in Juarez, located on the U.S.-Mexico border.

The Sinaloa cartel leader’s lawyers have filed several appeals against Guzman being sent to the United States, while Mexican officials said the process could take as long as a year to get a final ruling.

It’s unclear if the transfer on Saturday means the process is nearing its conclusion.

“El Chapo” was moved from a maximum-security Altiplano prison facility near Mexico City to the Juarez lockup, a security official told The Associated Press, without elaborating on why. The unnamed official was not authorized to talk about the matter publicly.

“Due to the proximity (to the U.S.), it makes it easier to extradite him,” an senior law enforcement official told CNN.

Mexico’s National Security Commission issued a statement, saying it was done in line with the country’s security protocols. It has rotated approximately 7,400 inmates nationwide as part of a security strategy that was implemented last September.


American officials have been preparing for Guzman’s extradition for months and have been trying to figure out a security plan, given his proclivity for escape.

Jose Refugio Rodriguez, an attorney for Guzman, told AP that he was sent to the Cefereso No. 9 prison. He said Guzman’s defense team wasn’t notified before it happened. Meanwhile, one of his lawyers is now heading to Juarez to try to meet with him.

“I don’t know what the strategy is,” Refugio told The Associated Press. “I can’t say what the government is thinking.”

Guzman’s lawyers, he confirmed are still trying to block extradition to the United States.

“El Chapo,” which translates to “Shorty,” first broke out of a Mexican prison in 2001. He was recaptured 13 years later, only to escape the Altiplano lockup the following year via a mile-long tunnel that was dug in the floor of the shower stall in his cell.

He was re-arrested by Mexican marines in Sinaloa in January after he fled a safe house.

He was taken back to Altiplano, where officials increased his security regimen. He is now under constant observation from a ceiling camera and there are no blind spots.

In the meantime, Guzman gave an interview with actor Sean Penn, who detailed their encounter for Rolling Stone.