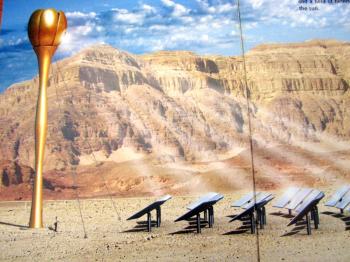 A graphic of the hybrid AORA plant in Kibutz Samar, in southern Israel. Mirrors concentrate the sun’s light onto a 30-meter high tower that heats water and transform them into vapor to generate electricity. (The Epoch Times)
Middle East

Eilot, Israel, located in southern Israel, seemed like a most suitable place to host a recent Renewable Energy (RE) conference. It is sunny more than 300 days a year and strong winds blow many hours a day in the city.

The conference started in an optimistic atmosphere with a ceremony to launch the $20 million U.S.-Israeli Energy Cooperation Act, passed two years ago by the U.S. Congress. The Obama administration has committed to supporting renewable energy sources and to mitigate domestic and international climate initiatives.

Israeli Companies Building RE Projects in the U.S.

BrightSource, an Israeli company, is now building for Southern California Edison, the world’s largest solar energy project in California. Israeli companies such as Ormat are already working in the U.S. to create clean energy from geothermal sources.

Adam Zeliner, CEO of Greener by Design from New Jersey told the audience about the state’s RE program. Zeliner told The Epoch Times concerning the USA-Israel cooperation, "Israel is clearly investing a lot of time and effort to move with the rest of the global community to turn to a greener and more carbon free energy. The cooperation as you know between Israel and the U.S. is always great, it is not just based on politics but based on specific issues with problems we are trying to solve".

Advocate Renelle Joffe, from Meitar Liquornik Geva Group explained why it is critical for Israel to develop alternative energies. Joffe said, "Israel is the only country in the world that based its electricity almost a hundred percent on fossil fuel. No other country in the world is doing that! If there is a failure or if someone pushes the wrong button on the control board, and it did happen in the past, then there is no electricity at all the country."

Even after exploitation of two gas deposits near the cities of Haifa and Ashkelon, Israel still depends mostly on foreign fossil energy.

Photovoltaic solar panels that transform solar energy into power are land consuming and may affect the biodiversity even in the desert. In Urban area, Building Integrated Photovoltaic (BIPV) has a solution: just put the panels everywhere on buildings.

Architect Yair Poplawski from the company Sunday Energy presented the principles of BIPV and why it is a good solution. Half of the world population today live in urban areas. In the West, each inhabitant uses an average of 400 KW a year, and if we move to solar energy, each inhabitant will need five square meter of photovoltaic panels. If you multiply the surface by the total population of the world, we will need 35 billion square meters of space to install the photovoltaic panels. This space is not available in urban area where mostly only building roofs can be used for this purpose.

Aviva Konforty, Shirasol company General Manager explained the advantage of BIPV: "It can be put on the wall, it can be in a screen wall not completely transparent, it can be on terraces and it can be on the window, the lower part of the window that usually is transparent. The building can look very very nice from the outside and it can look magnificent from the inside because the Architect can use the Photovoltaic different materials to make all kind of patterns of light and shade."

Ecologically, it is also viewed as more efficient to produce power in the same place where it is to be consumed.

The Silicon Valley for RE

The conference ended with a tour of the Eilot region including a visit to the new Environmental Education Park at Kibbutz Lotan, where Udi Gat, head of the Eilot council, made an ambitious declaration about his vision of renewable energy: "Today when you say “Silicon Valley” it is associated with high-tech in San Francisco. In the near future when you will say “Renewable Energy” it will be associated with Eilot Valley."

In Kibbutz Samar in southern Israel, the company AORA has installed a unique hybrid-thermal pilot plan. It uses a special new way of producing electricity from the sun and is almost fully Israeli made. The system was invented by researchers from the Weizman Institute. Mirrors concentrate the sun’s light onto a 30-meter high tower that heats water and transform them into vapor to generate electricity.