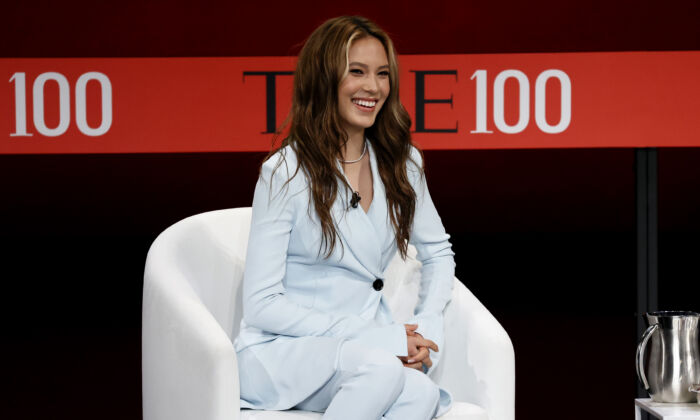 Four months after winning two gold medals for China, freestyle skier Eileen Gu once again became a hot topic on the country’s social media after she announced her decision to support Salt Lake City’s bid to host the Winter Olympics.

“I think that’s this beautiful example of globalism and of the capacity that we can use skiing and … we can use winter sport to connect people,” she said at the event in New York. “Salt Lake specifically wants to become a global destination for athletes everywhere to come train there and they want to incorporate 15 new countries into the Winter Olympics,” she added.

A spokesperson for the Salt Lake bid committee told The Associated Press that Gu is “working with” them, but as an “athlete representative” for now.

Gu’s announcement won praise from China’s state-controlled media and her fans, with some quoting her comments saying she didn’t regret representing China at the Beijing Games.

The San Francisco-born athlete has won overwhelming adulation in the country, especially after winning two golds and a silver for team China during the Beijing 2022 Winter Olympics earlier this year.

The news was among the hottest topics on the microblogging platform Weibo and the topic had been viewed more than 400 million times by Wednesday afternoon.

Most comments were supportive of her decision, claiming it reflects the international influence of “China’s athletes.”

But not everyone was positive. Her decision to help the U.S. bid was criticized by some netizens, who questioned her intentions in competing for China.

“Which country is she from?” One user wrote. “She is Chinese when she makes money in China. Then she becomes American when she lives in the United States,” another user commented, referring to her lucrative commercial deals.

The 18-year-old’s nationality has already drawn scrutiny. Gu repeatedly dodged questions about whether she gave up her U.S. passport to represent China at the Olympics.

“When I’m in the U.S., I’m American. When I’m in China, I’m Chinese,” Gu told reporters at a news conference earlier this year.

China doesn’t allow dual nationality. Official media never raised the issue while welcoming the medals Gu earned for the country. Beijing finished the Games with a record nine golds in February, though the lead-up to the event was overshadowed by a diplomatic boycott over the regime’s human rights records.

The skier’s success prompted the leader of the Chinese Communist Party Xi Jinping to single Gu out during an April awards ceremony in Beijing.

Unlike the overwhelmingly positive coverage in China, opinion on Gu, who is due to attend Stanford this fall, is mixed in the United States. She has faced backlash for representing the Chinese regime, which HBO host Bill Maher described as “an authoritarian surveillance state” that can make people “disappear for a few months” and has “basically jailed an ethnic minority,” referring to Beijing’s expansive repression of ethnic Muslim minorities in the Xinjiang region.

“Is that cool now, to choose to represent a totalitarian police state over America?” the host said in an episode of “Real Time with Bill Maher” in February. “And by choosing Team China, Eileen Gu became a living symbol of China’s triumph over the West, which wouldn’t bother me so much if I thought China had triumphed over us in the ways that really matter. But they haven’t.”