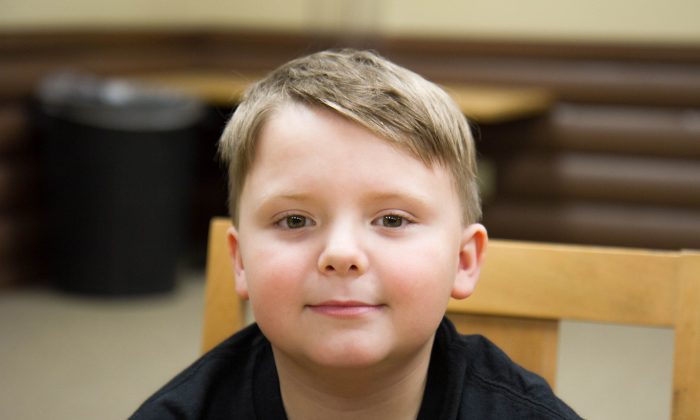 Eight-Year-Old Beats Heart Condition with a Bow and Arrow

Prohibited from doing most other sports, Jeffrey Paes finds his calling in archery
By Holly Kellum
biggersmaller
Print

“He’s absolutely professional,” said a bystander who was watching to see how the release worked on Jeffrey’s bow.

In the last few months, Gander Mountain, a sporting goods store with an archery range, has become Jeffrey’s second home—he comes here every day after school, on weekends, and he is on a first name basis with the staff.

“One time I was here from breakfast all the way to dinner—we skipped lunch,” he said with a laugh.

Jeffrey picked up archery this past Christmas after he was diagnosed with a serious heart condition called LQT1 in late 2014, which prohibited him from doing most other sports.

LQT1, a member of the Long QT syndrome (LQTS) family, is a genetic mutation, often hereditary,  that affects the electrochemical communication with the heart. This particular strain, LQT1, affects the potassium levels in the body, a necessary element for the heart to beat regularly.

There are different triggers that could cause someone with LQTS to go into cardiac arrest or syncope, a temporary loss of consciousness from low blood pressure, such as acute emotions, exercise, stress or shock, but it could happen at any time.

His doctor has given Jeffrey strict instructions on what he can and cannot do with his condition.

To mitigate the risk of shock from swimming in a pool, for example, Jeffrey has to get into the water gradually so his body has time to adjust to the change in temperature.

“They said alarm clocks were bad so now we have set the alarm clock, the phone alarm, to a different music where it’s not that “ER ER ER” to wake up,” his mother, Jennifer Costello, said.

He keeps an AED (automatic external defibrillator) on him at all times, in what his father, Joe Paes, calls his “support bag” and he takes medication every day to keep his heart rate steady.

His doctor has given Jeffrey strict instructions on what he can and cannot do with his condition.

“One thing I hate—I can’t chew it, I have to swallow it,” Jeffrey said of the pills he has to take.

Needless to say, the diagnosis has been a big transition for the whole family.

Jeffrey is a third grader at Pakanasink Elementary School in Pine Bush. He now has an aide with him at all times during the day in case he needs CPR, and has to take a special school bus that has someone who can monitor him and give him CPR if he needs it.

Since Jeffrey’s diagnosis, the school has gotten all the teachers who were not certified in CPR, certified, said Joe, and Jeffrey’s parents made sure that the school’s AED is up to code.

The name LQT1 could be a sidekick to Star Wars robots C–3PO and R2-D2, and to Jeffrey, it’s about as real as one.

He has never had any symptoms, although he will tell you the heart monitor he used to wear is as annoying as any, and it was only by luck that they discovered his condition at all.

His parents took him to the doctor in the summer of 2014 because he had some blue around his mouth and was complaining of trouble breathing while exercising. The pediatrician didn’t take it seriously, but they were insistent. They had him seen by a cardiologist who ran an electrocardiogram (EKG) on him, a test that checks the electrical activity of the heart.

It was only by luck that they discovered his condition at all.

The cardiologist told them that if the test came up positive for a known type of LQTS, they would have a diagnosis. And if it came up negative, there was still a 30 percent chance that he had an unknown type of LQTS.

It did come back positive, but the cardiologist said it was likely not related to the blue around his mouth.

“Maybe it was just him getting tired and showing a vein or something,” Costello said. “I don’t know.”

It is unknown how many people have LQTS because the symptoms are few and diagnosis rare, but the Philadelphia Children’s Hospital Research Institute estimates 1 out of every 2,000 to 2,500 people have LQTS world-wide.

“I tell my friends, ‘Before your kids play sports, take them for an EKG—it’s five minutes, it’s painless, it’ll save their life,'” Costello said.

I tell my friends, ‘Before your kids play sports, take them for an EKG.’
— Jennifer Costello, Jeffrey Paes' Mother

Costello said cases like the 17-year-old football player who mysteriously collapsed after a football game last November in Kansas may be due to undiagnosed LQTS. She doesn’t understand why it is not part of the physical kids have to take before they play sports since it can be fatal if not caught.

“[They] check for hernias,” she pointed out.

Possibly the hardest part of the condition for Jeffrey is to not be able to play baseball, lacrosse, soccer, do karate, or any of the other activities the active 8-year-old used to do.

“He was playing golf last summer,” Costello said. “He liked it, but this time of year he cried. He said, ‘When can I play lacrosse, when can I play baseball again?'”

Joe, who was a hobby archer, was in Gander Mountain around Christmas last year looking at bows when Costello suggested they get one for Jeffrey. Joe had his doubts that Jeffrey was strong enough to use one, but they decided to give it a try.

Jeffrey turned out to not only be strong enough but quite adept at it, and they started looking for teachers for him. Joe said they were turned away by teacher after teacher because they “don’t want to handle kids.”

To be able to shoot as well as he did is not that common.
— Joe Varlaro, Owner of Northern Dutchess Archery and Sportsmen Supply

Despite that, Jeffrey excelled on his own, coming to Gander Mountain every day to practice, and soon they were looking for a sponsorship for him.

“He shoots the bow well for somebody his age—8 years old, to be able to shoot as well as he did is not that common,” said Northern Dutchess Archery Owner Joe Varlaro, who interviewed Jeffrey for his Missions sponsorship, as well as for a sponsorship from his own store.

Varlaro has sponsored kids before, he said, but none as young as Jeffrey, who is now one of 12 shooting staff the store has. Jeffrey gets training, the use of the store’s archery range, and discounts on service and equipment in exchange for promoting the store at competitions.

All this has been a silver lining to what they say has been a dizzying nightmare since the family found out about Jeffrey’s condition.

“If it weren’t for his illness…” Joe said.

“…he never would have picked up a bow,” Costello finished.

Jeffrey’s goal is to pass the International Bowhunters Organization world qualifiers this April in Red Hook in the “Future Bowhunters” category.He then hopes to do the states competition in July in Penn Yan, New York, and if all goes well, the world championship in Seven Springs, Pennsylvania in August.

He and Joe are also are starting a free archery league for people, mostly kids, with all levels of abilities and disabilities who want to learn archery.

“They can shoot in wheelchairs or whatever … everything’s pretty much laid out for the children,” Joe said. “That’s why we named it ‘Shoot from the Heart.'”

Starting the first week in April, they are going to be meeting on Sundays at 10:00 a.m. at the Shawangunk Fish and Game Association, 37 Denman Road in Middletown. For more information, contact Joe Paes at 845-699-8764.