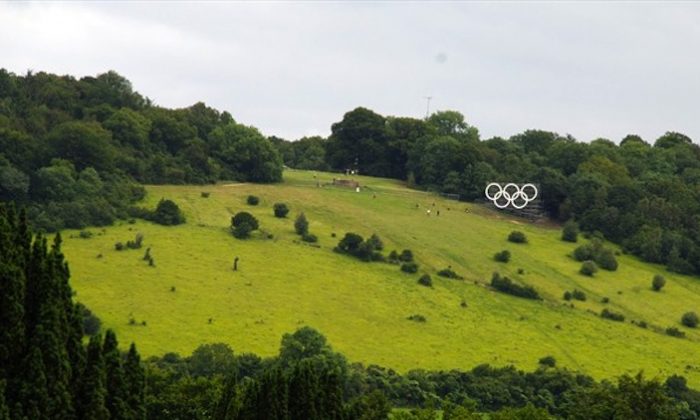 Eight Days to the Games, Surrey Gears Up With Olympic Rings

Eight days before the 2012 Olympics begin, the London Organising Committee of the Olympic Games and Paralympic Games installed a large set of Olympic rings in the county of Surrey.

Made of aluminum and stretching 15 meters wide and 7 meters tall, the Olympic rings have been positioned on the side of the National Trust’s Box Hill, which will be the site of the Olympic Cycling Road Races on July 28 and 29.

“The Olympic Rings are an iconic symbol, inspiring athletes and uniting people around the world,” LOCOG chairman Seb Coe said in a statement. “These rings will excite and inspire local people and visitors to Box Hill.”

Giant Olympic rings have been installed all around the United Kingdom, with the most prominent on London’s Tower Bridge a month ahead of the games. The rings weigh more than three tonnes and measure over 25 meters wide and 11.5 meter tall. During the Olympics, each of London’s renowned bridges will be lit up in the evenings in an array of colors.

Meanwhile, the Olympic torch has reached Canterbury Cathedral and Turner Gallery on its way to Maidstone on day 62. The Olympic Games will begin on July 27 and run through to Aug. 12. The Paralympic Games will run from Aug. 29 to Sept. 9.

Aside from security glitches and protests over rooftop missile bases, in the city itself, two strikes have been proposed during the Olympics, one at the airport and another in the tube system.