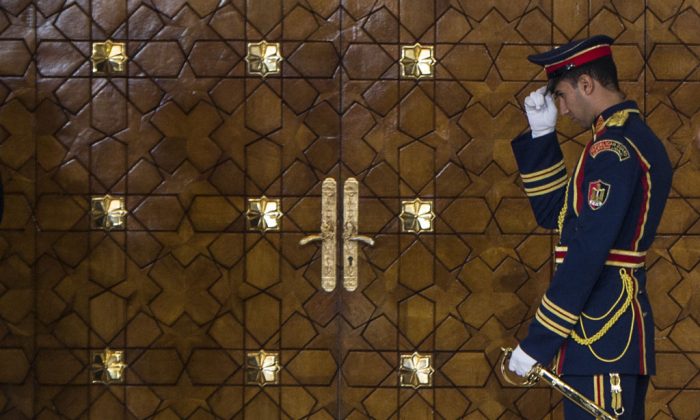 A member of the Egyptian Presidential guard stands outside a meeting room as Egyptian President Abdel-Fattah el-Sissi meets with Cyprus' President and Greek Prime Minister on Nov. 8, 2014, in Cairo. (Khaled Desouki/AFP/Getty Images)
Africa

Gen. Mohammed Farid el-Tohamy, in his mid 60s, was seen as a hardliner in the government crackdown against Islamists and secular dissidents.

El-Tohamy was put in charge of the general intelligence agency immediately after el-Sissi, then head of the military, led the ouster of the elected President Mohammed Morsi in July 2013 following massive protests against his Islamist government.

El-Tohamy was el-Sissi’s mentor when they both served in military intelligence under longtime ruler Hosni Mubarak. El-Tohamy went on to head one of the most important government financial watchdog agencies, the Administrative Control Authority, where he served until 2012 when Morsireplaced him. Two days after Morsi’s ouster, el-Tohamy was named intelligence chief.

It is not clear if el-Tohamy’s removal reflects a change in policy. However, it removes one of the most senior hawkish voices in el-Sissi’s administration.

Several officials said el-Tohamy was relieved of his post for health reasons, although one official said a desire for “new blood” to deal with an increasingly complex security situation factored into the decision. The officials spoke on condition of anonymity because an official announcement has yet to be made.

Retired Gen. Sameh Seif al-Yazal, who remains close to el-Sissi and the intelligence community, told The Associated Press that el-Tohamy was recently in the hospital for a hip replacement.

El-Tohamy returned on Dec. 12 from a trip to Saudi Arabia and Bahrain.

Since Morsi’s ouster, authorities have led a heavy crackdown on his followers, other Islamists and the secular opposition. Thousands of people have been arrested and hundreds others killed in violent clashes. At the same time, security forces and troops have come under increasing attacks from militant groups.

The military and security forces have been hit by several startlingly bloody attacks, including an attack on the main security headquarters in Cairo, and a couple of attacks on troops in Sinai that killed dozens of soldiers.