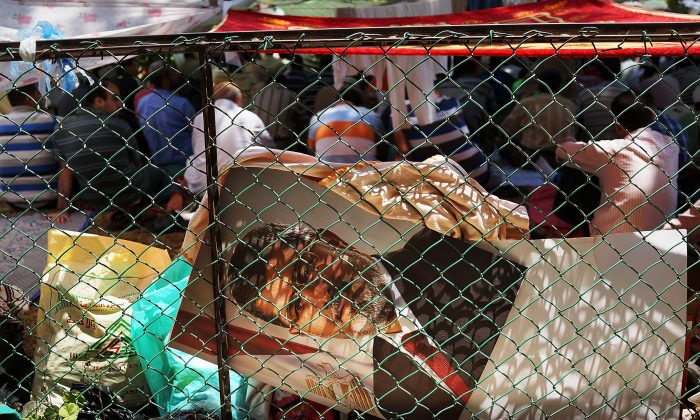 A picture of former Egyptian president Mohammed Morsi sits in a pile in Cairo, Egypt on July 5, 2013. Following the ousting of Morsi, Chinese state media ran editorials stating that the chaos in Egypt was proof of Western democracy's failure. (Spencer Platt/Getty Images)
China

Following the ousting of Egypt’s democratically-elected president, Mohamed Morsi, on Wednesday, Chinese state media ran editorials warning of the failures of Western democracy, stating that democracy is not a “universal cure” for the ills that developing countries face.

Egypt’s chaos was proof that this “export of democracy is not a guarantee to cure all diseases, and it cannot solve the difficult issues that different countries face as they develop,” state mouthpiece Xinhua said.

“Some Western countries should use the situation in Egypt as an example, to seriously reflect, wake up, and not readily criticize other countries. This is also saving a bit of face for them,” Xinhua continued.

Bilingual state newspaper the Global Times also published an editorial proclaiming that “countries simply copying the Western style came to grief,” while the Beijing Daily said countries “should not have a superstitious belief or reverently worship the prescription that Western countries have provided.”

The overseas edition of the People’s Daily wrote that to developing countries, “realizing economic prosperity, societal stability, and state security are important tasks that are far more crucial than the ‘one person, one vote’ of Western-style democracy.”

The pro-Beijing Hong Kong newspaper Wen Wei Po stated that Hong Kong should learn from the chaos following universal suffrage in Egypt, warning that “unrealistic and radical actions can cause difficult-to-fix injuries and shock to Hong Kong’s social stability and people’s economic livelihood.”

Days before, tens of thousands of Hong Kong residents took part in a massive demonstration to push for direct elections. Currently, the city’s head of government is elected by a committee that makes up less than 0.02 percent of the total population.

Some Chinese netizens reacted to these editorials with fury. Hu Ziwei, a popular TV show hostess with over 340,000 followers on her Sina Weibo account, posted this message: “You can ask Egyptian citizens if they want to return to the era of Mubarak. You can also ask Iraqi citizens if they want to return to Saddam’s era. Or ask Russians about Stalin, Libyans about Gaddafi. They always think that they can hide China’s own societal ills by mocking others’ small problems.”