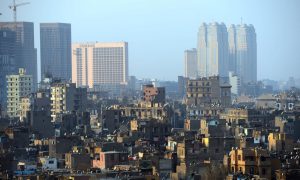 CAIRO—The 20-year-old law student says he has had enough of fruitless protests in support of Egypt’s deposed Islamist president, two years of a losing struggle with police.

Now he wants to join the extremists of the ISIS group who are battling the army in the Sinai Peninsula.

He and other youths are growing increasingly open in their calls for violence and a move toward extremism, frustrated by the police crackdown since the military ousted President Mohammed Morsi in 2013. Some want to avenge friends and family killed or abused by police.

Once sympathetic to Morsi’s Muslim Brotherhood, some of them resent it as weak and ineffectual.

“Now we know there is only one right way: jihad,” said the law student, Abdelrahman, showing off scars from pellets fired at him by police shotguns during protests. Like other protesters interviewed by The Associated Press, he spoke on condition he be identified only by his first name for fear of police retaliation.

He spoke bitterly about the series of ballot box victories in 2011 and 2012 that gave the Muslim Brotherhood political dominance and made Morsi the country’s first freely elected president.

“Democracy doesn’t work. If we win, the powers that be, whoever they are, just flip things over,” he said. “The Brotherhood thought they could play the democratic game, but in the end, they were beaten.”

At a time when militants are carrying out more sophisticated attacks in Egypt, the apparent spread of radicalism among youths in Cairo is a worrying sign for Egyptian authorities, who say they are working to quell violence.

In recent weeks, militants who declared themselves to be the Sinai branch of the Iraq- and Syria-based Islamic State group tried to take over a Sinai town in an elaborate attack on security forces, and Egypt’s top prosecutor was killed by a bomb in the first assassination of a senior official here in a quarter-century. Attacks are frequent in Cairo and elsewhere, often killing policemen or soldiers, and hitting businesses and some tourist sites.

The insurgency swelled after the army overthrew Morsi following mass nationwide protests of his rule. Since then, the more than 80-year-old Brotherhood has been shattered by a security crackdown. Most of its top leaders are in prison, with several sentenced to death, including Morsi. Since 2013, hundreds of protesters have been killed, many more wounded and thousands arrested, often brutalized in prison.

With other leaders in hiding or abroad, lower-level supporters of the Brotherhood have been the ones working to keep protests alive. Members of the Brotherhood themselves are divided over whether to stick to its official policy of peaceful protest or to embrace violent confrontation with the government. Authorities already accuse the group of fueling violence and have branded it a terrorist organization.

An official at Egypt’s Interior Ministry, which is responsible for the police, said its policies aim to eradicate lawlessness and chaos, saying it must confront those who seek to incite youth in rough neighborhoods to violence.

“The Interior Ministry also follows information and monitors social media sites to track people who promote extremist ideas and who are affiliated in groups,” according to the official, who spoke on condition of anonymity because regulations did not allow him to talk to reporters.

The ministry has carried out several “pre-emptive strikes” against such individuals, he said without elaborating. If it is proven that a policeman is guilty of wrongdoing, he would immediately face legal proceedings, the official added.

Youssef, a Brotherhood member who leads protests in the greater Cairo area, said he opposes a turn to violence, but adds that others are embracing it in the face of police abuses.

“We have all lost lots of friends. And as a result there are lots of opinions. Some feel the only way to resist now is with armed struggle,” said the 20-year-old business student. Others also involved in organizing demonstrations made similar statements.

Protests occur almost daily in poor, forgotten corners of the capital and countryside. Banners are less about Morsi and more about revenge against police.

“Peace is dead,” proclaimed one at a recent march in the Cairo slum of Matariya. In the nearby village of Nahia, another banner bore the slogan “peaceful” — then mocked it by adding a smiley face carrying an assault rifle. Some demonstrators chant slogans praising the Islamic State group.

“Most of these young guys were not political before. They were politicized by violence, by seeing friends or family members shot and killed by police or being arbitrarily detained,” said Basem Zakaria al-Samargi, who works at the Cairo Institute for Human Rights, an advocacy group, and lives in Matariya. “There are many people who now want vengeance from the state.”

Jerome Drevon, a researcher at the University of Manchester and a specialist on militant groups in semi-authoritarian regimes, said the conflict is not about ideology, but rather people’s willingness to avenge themselves and their friends against the security forces and join whatever group can help them achieve that.

“The new Egyptian regime has triggered a self-fulfilling prophecy,” he said. “They have hindered any possibility of peaceful opposition to the regime, assimilated the Islamist opposition to IS, eroded mainstream Islamist groups’ internal organizational control over their sympathizers, and nourished a desire for revenge for young opponents.”

At a news conference this month in Cairo, U.S. Secretary of State John Kerry quoted President Barack Obama, who has said that “when people are oppressed, and human rights are denied … when dissent is silenced, it feeds violent extremism.”

Matariya, a crowded district of narrow alleyways with few services and a history of neglect, has seen some of the country’s bloodiest clashes with police in the past two years. Dozens were killed in gunbattles there in January.

Rights groups have raised alarm over possible abuses at the district’s police station, where detainees have died in custody and where residents talk of rampant torture and of young men disappearing after night raids on their homes.

Abdelrahman’s family is like many others in the district. His cousin is in a wheelchair after being shot by police at a demonstration. His uncle was recently arrested for protesting. His brother, known for orchestrating attacks on police, is on the run.

But Nahia, the nearby village, is a virtual no-go zone for the state at the moment. There, hundreds of youth march unopposed in formation down main roads, calling for the ouster of President Abdel-Fattah el-Sissi, the army chief who deposed Morsi and later was elected to office. Some residents brag about the lack of a police station in Nahia, or the 2013 sniper killing of a police general in Kerdasa, a nearby Islamist stronghold.

While marching, Abdelrahman has waved the Islamic State group’s black flag. He says the only violence he has committed is burning three police cars. But he adds: “I’m ready to fight.”

He says he has several friends already fighting alongside militants in Sinai.

Now living in a safe house away from his family, he says he knows whom to contact in order to join the group but that he needed to have a sponsor and go through vetting because it is wary of government infiltrators.

The self-declared Sinai branch of the ISIS group is believed to have originally drawn on local Bedouin tribesmen for recruits. But the attacks it has claimed around the country have involved Egyptians from outside Sinai, suggesting it is gaining new followers.

Some Brotherhood members have attacked police stations or planted bombs on the street, but they usually get arrested, Abdelrahman said.

“I tell people they should join a jihad group,” he said, “and if not, take the risky step of forming a group on their own, or even acting alone.”