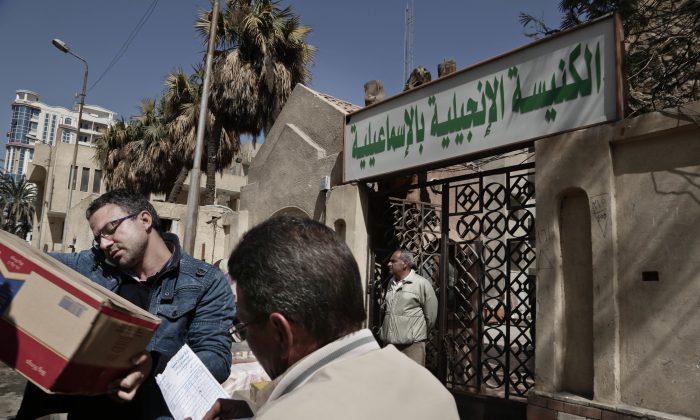 A truck loaded with goods arrives for Christian families who fled el-Arish at the Evangelical Church in Ismailia, 120 kilometers (75 miles) east of Cairo, Egypt on Feb. 26, 2017. (AP Photo/Nariman El-Mofty)
International

ISMAILIA, Egypt—After Islamic terrorists barged into his uncle’s house, shot him and his son dead, then looted the place and set it on fire, Said Sameh Adel Fawzy knew it was time to leave.

The 35-year-old Christian, who owns a plumbing supply business in Egypt’s troubled northern Sinai town of el-Arish, packed up a few belongings and brought his family to the Suez Canal city of Ismailia, joining hundreds of Christians fleeing a spate of sectarian killings last week.

“My cousin went to open the door after he heard knocking,” Fawzy said, speaking from a youth hostel where authorities were putting up dozens of families who fled the town. “Masked extremists, terrorists with a pistol, took him inside and shot him in the head,” then dragged his screaming mother out to the street half-dressed and killed her husband. The woman, still in shock after the Tuesday night slayings, sat nearby.

“They’re thirsty for the blood of any Christian,” said Wafaa Fawzy, the sister-in-law of Saad Hana, the man who was killed along with his son. “They were pretty clear when they said they won’t leave any Christian in peace. They want an Islamic state.”

The killings, two of seven brutal slayings in recent weeks, come after a devastating ISIS suicide bombing at a Cairo church in December that killed nearly 30 people. The violence poses a fresh challenge to President Abdel-Fattah el-Sissi’s government to put down an ISIS-led insurgency in northern Sinai and prevent spillover that at times has reached the mainland.

The group’s local affiliate recently vowed to step up a wave of attacks on the embattled Christian minority, pointing to a shift in tactics toward targeting Christians and their holy sites, which are less protected than the military and police installations that are their usual targets.

Northern Sinai has for years been the epicenter of an insurgency by Islamic terrorists, and the area’s few Christians have slowly been trickling out. But departures surged after suspected terrorists again gunned down a Christian man in front of his family two days after Fawzy’s uncle and cousin were killed, stoking panic among Christians.

No terrorist group has claimed responsibility for the attacks. But an ISIS affiliate, which is based in northern Sinai, released a video vowing to step up attacks against Christians, who it describes as “infidels” empowering the West against Muslims.

Coptic Christians, who make up about 10 percent of Egypt’s population, have always been a favorite target of Islamic terrorists. But attacks on churches have increased since the 2013 military overthrow of an Islamist president. Christians overwhelmingly supported the army chief-turned-president, el-Sissi, who led the ouster, and terrorists have used their support as a pretext to increase attacks against them.

The Christian exodus continued for a fourth day Sunday, bringing to more than 100 the number of families who have fled el-Arish, said Nabil Shukrallah, an official with the city’s Evangelical Church.

Families arrive frightened and in need of supplies, which are being stockpiled at the church from donations from several parishes, he said. The new arrivals are then housed in and around the city, in private homes or in accommodations provided by the government.

“They’re exhausted, with urgent needs for food and children’s clothing,” he said, as one father carried a sick infant to be evacuated by ambulance. “They’re terrified of the violence and brutality.”

Before Egypt’s 2011 Arab Spring uprising, some 5,000 Christians lived in northern Sinai, but that number has since dwindled to fewer than 1,000, according to Christian clergy members and residents. Egypt does not keep official statistics on the number of Christians in specific regions or nationwide.

Rights activists say the displacement is a clear sign the government has failed to provide security for the embattled minority in Egypt’s volatile northeastern corner, where they have faced threats before. They point to the fact that the government only agreed to put up the fleeing Christians in government housing after pressure on social media.

Blacksmith Ezzat Yacoub Ishak said he and his two sons left their apartments carrying “absolutely nothing.”

“The security forces, they’re all hiding and scared for their lives, scared to confront those people,” he said, speaking from a Spartan room furnished with only a mattress in a rented apartment in Ismailia. “There is no security. Yes, there are military and police at the check points, but for my protection as a human there is nothing.”

The military’s fight against the Sinai terrorists has been bitter.

Hundreds of troops have been killed, the army has razed hundreds of houses to stop alleged terrorist infiltration through tunnels from neighboring Gaza, and in 2014, el-Sissi declared a state of emergency and curfew after suicide bombings killed more than 30 soldiers. Still, the insurgency has shown little sign of abating.

Mina Misak, another new arrival in Ismailia, said the spate of recent killings made life in el-Arish too much to bear. He said terrorists killed his father, Misak Nasrallah Misak, in a drive-by shooting a year ago as he left his job at a hospital.

“It tore me to pieces when I found out, and now it’s even worse—there’s no reason to stay,” the 20-year-old said. “It’s difficult to do anything. Most of my friends and family have left. And Muslims are scared too, of course.”

“In el-Arish, there are seven checkpoint buildings lining the road to town, but inside, you hardly see a soldier,” said Nabil, who like other fleeing Christians declined to give his last name for fear of reprisals. “Whenever there’s an attack they come after we telephone them, sometimes days later, and ask for descriptions of the killers. But that’s all.”

At the Ismailia youth hostel where authorities were putting up some 45 families, luggage, boxes of food and the newly displaced arrived throughout the day.

“I don’t want to stay there and die as a casualty in the war that has hit el-Arish,” said Reda, a Christian civil servant who arrived two days earlier with six family members, including grandchildren. “If they allow us we will stay here until the terrorism is over and the government makes peace.”

At the Evangelical Church, a shop owner named Fayez arrived with a truckload of furniture ahead of his family to seek a place to relocate.

“Hopefully we’ll find a home and be able to stay here, but I don’t know how I would move my business,” he said. “Daily life looks normal in el-Arish, until you hear about terrorists shooting people in their own homes.”