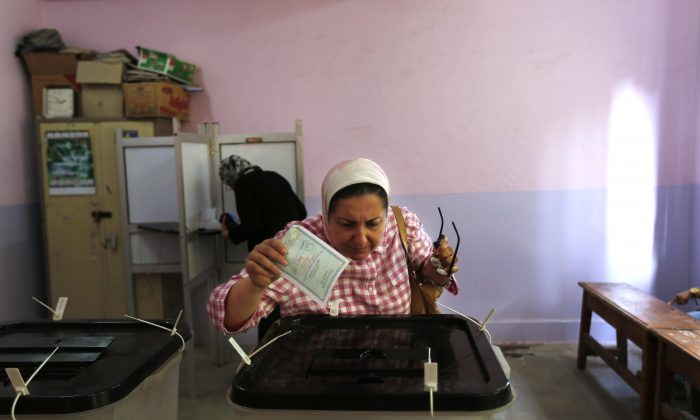 An Egyptian casts her vote during the first round of Egyptian parliamentary elections, at a polling station in Alexandria, Egypt, Sunday, Oct. 18, 2015. (AP Photo/Hassan Ammar)
Middle East

CAIRO—A mix of voter apathy and frustration characterized elections held Sunday for Egypt’s first legislature in more than three years, a chamber widely expected to be compliant with the policies of President Abdel-Fattah el-Sissi who, as military chief, ousted the country’s first freely elected leader before he was elected to office himself a year later.

Egypt’s last Parliament, elected less than a year after the 2011 ouster of longtime autocrat Hosni Mubarak, was dominated by supporters of the now-outlawed Muslim Brotherhood as well as ultraconservative Salafi Islamists. It was dissolved in June 2012 following a ruling by the nation’s highest court that its election was unconstitutional.

A largely toothless upper chamber, also dominated by Islamists, continued to sit until el-Sissi’s July 2013 ouster of the Islamist Mohammed Morsi, when it was also dissolved.

“There’s no incentive to vote,” declared 38-year-old Mohammed Mahmoud, owner of a carpentry workshop across the street from a polling center in Boulaq el-Dakrour, one of the most densely populated districts in Egypt.

“Even if a candidate has a platform, I don’t think it’s true. I don’t think it will be implemented. It will be just talk,” he said in Cairo’s twin city of Giza, located in 1 of 14 provinces in which the first of two days of voting took place Sunday.

One of his workers, Mohammed Hassan, echoed the same sentiments, “We’ve been hearing the same things for 20 years.”

Egyptians abroad began voting Saturday and continued Sunday, where voting was underway in 14 Egyptian provinces, including Giza and the Mediterranean port city of Alexandria. Voting in Egypt’s 13 other provinces, including the capital Cairo, will be Nov. 22–23. Each stage of the vote will be followed by a runoff.

Final results will be announced in early December and the new house will hold its inaugural session shortly after.

There were no official or reliable figures available on Sunday’s turnout, expected to be as low as 10 percent. State media reports suggested while turnout was low in the morning, large numbers of voters cast ballots in the afternoon.

Sunday is the start of the business week in Egypt, which has more than 50 million registered voters.

Fearing attacks by Islamic extremists to disrupt the vote, tens of thousands of police and soldiers were deployed to secure the election, many of whom were in full combat gear, complete with camouflaged fatigues, helmets, and body armor. Some wore ski masks. In one polling center at Imbaba, a one-time Islamist stronghold in Giza, dozens of troops were on duty amid sandbagged machine-gun positions.

Egypt’s next parliament will be the first elected after the adoption last year of a new constitution, arguably the most liberal Egypt has ever had. The constitution empowers lawmakers, albeit under stringent conditions, to impeach the president, call for early presidential elections, or withdraw confidence from the prime minster or individual members of his Cabinet.

But analysts and observers say el-Sissi has made sure the chamber will be subservient to his will so that he can press ahead with his policies without serious political opposition. A quiescent chamber harkens back to the days of Mubarak, when election after election during his 29-year rule gave his National Democratic Party an overwhelming majority amid credible claims of rigging, fraud, and police interference.

Under a new election law el-Sissi decreed last year, 448 of the house’s 596 seats will be contested by “individuals”—candidates not linked to any political group. Critics said the system will favor wealthy government-connected businessmen and local powerbrokers, essentially a repeat of the Mubarak-era model. Only 120 lawmakers will be elected on party lists, while el-Sissi will appoint 28 others.

Since taking office after a landslide election win 16 months ago, el-Sissi has waged a high-octane campaign to revive Egypt’s ailing economy, fight a stubborn Islamic insurgency, and assume a greater political and military role in a turbulent Middle East—all while silencing opposition at home and governing with apparently few checks and balances.

He has spoken vaguely of his democratic convictions, preferring instead to focus public comments on what he sees as the vital need for Egyptians to unite in the face of security and economic challenges. He has repeatedly warned against the chaos and bloodshed engulfing countries in the region like Libya, Iraq, Syria, and Yemen.

Emboldened by a population longing for stability after the turmoil that followed Mubarak’s ouster, Egyptian authorities under el-Sissi have gradually shown less and less tolerance for dissent. Security forces killed hundreds of Islamists in a series of deadly clashes in the summer of 2013 and jailed thousands more, of whom scores have been sentenced to death after trials criticized by rights groups as flawed.

Restrictions on demonstrations have all but killed street activism, while human rights abuses by police go mostly unpunished and authorities have shown little concern over recent cases of young pro-democracy or Brotherhood-linked activists disappearing.

Another Giza voter, Cairo University civil engineering professor Ali Abdel-Azeem, said he voted for the best known pro-el-Sissi party list. “But honestly no one has a program and they are all saying the same thing,” he said.

There was a resolve among some voters Sunday to keep Islamists out of the legislature, with some saying they were casting ballots specifically to ensure that. Others were convinced that little will change with a new parliament, pointing to years of unfulfilled promises by candidates or a perceived lack of compassion by successive governments.

Morsi, the ousted president, hailed from the Muslim Brotherhood, which won every election since Mubarak’s February 2011 ouster and until his removal in July 2013. The ultraconservative Salafi party, which supported the ouster of its one-time ally Morsi, also fared well in the last parliamentary election. It is running in this election.

“I came to vote because it is my duty. If not enough people show up to vote, the country will fall into the hands of the Brotherhood and the Salafis. Then we will have more of a mess,” said Nahed Aref, a retired jeweler, while waiting in line to cast her vote in the Giza District of Dokki.

Another retiree in Giza, Mamdouh Abdel-Aziz, 72, walked 30 minutes to reach his designated polling center and waited another 30 in line to cast his ballot.

“My hope is that the election will strengthen Egypt … and that we aren’t controlled by someone with a beard or someone who uses religion for personal gain,” he said, alluding to Islamists.

But the daily grind of navigating Egypt’s seemingly endless problems was also on some minds.

“Not a single candidate even mentioned the water problem here,” said Sumaya Saleh, a pharmacy sales assistant who works near an Imbaba polling station but is abstaining from the vote. She held a cup of murky tap water to make her point.

“The only people voting are the rich or the ignorant,” she went on. “The former because parliament will serve their interests and the latter because they just do whatever they are told to do.”