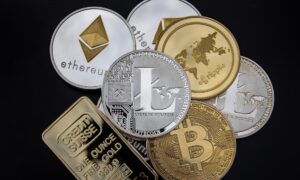 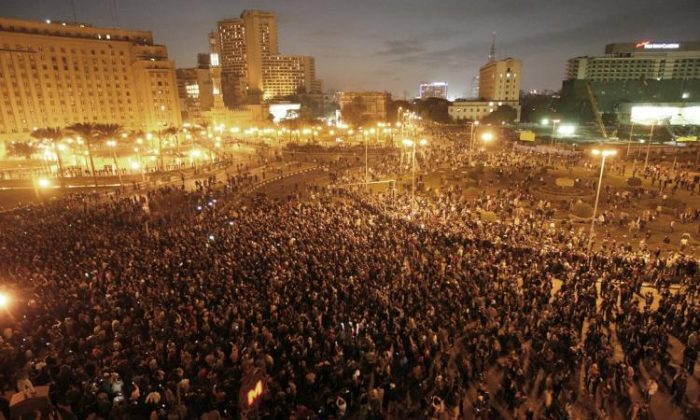 Egyptian demonstrators protest in central Cairo to demand the ousting of President Hosni Mubarak and calling for reforms on Jan. 25. Thousands of demonstrators took to the streets of Cairo, facing a massive police presence, in a protest inspired by Tunisia's popular uprising. (Mohammed Abed/AFP/Getty Images)
Opinion

Egyptian Labor and the State

Though it was not at the forefront of the pro-democracy movement, Egyptian labor played a decisive role in bringing down the Mubarak regime in 2011. Labor demonstrations had been increasing since late 2004, which helped to foster the atmosphere of protest in which Egyptians took to the streets in the thousands. The labor protests had emerged outside of the state-run Egyptian Trade Union Federation (ETUF), as workers felt that the institution that was supposedly representing their interests was actually defending the interests of the regime.

On January 30, 2011, in the midst of the 18-day revolution, unions established under Mubarak announced the creation of an independent entity, the Egyptian Federation of Independent Trade Unions (EFITU). EFITU is comprised of unions that operate outside of the ETUF. In late 2013, EFITU claimed a membership of around 300 unions. The Egyptian Democratic Labor Congress (EDLC), which also formed in 2011, was formally established as an independent trade union federation with a reported membership of 186 unions in April 2013.

Despite these strides, the post-revolution trade union movement has been unable to influence the political process in a way that reflects its organizational or socioeconomic interests. This predicament is based on both historical and more contemporary structural obstacles.

Postcolonial state-labor relations stem from a pact established by former President Gamal Abdel Nasser that assures the loyalty of labor to the state. The state’s role has been to guarantee workers a certain standard of living by ensuring that they receive a salary that covers their basic needs. In return, workers provide the state with political support and contribute to the project of national development. However, the increase of neoliberal economic policies, particularly beginning in 2004 with Prime Minister Ahmed Nazif’s government, led to a deterioration of workers’ conditions, and the Nasserite pact began to suffer.

Indeed, the “trickle down effect” on which the government based its neoliberal economic strategy never happened. Despite macroeconomic GDP growth, real wages did not increase, and in many cases actually declined. For example, in 2007, the monthly base salary of industrial workers was approximately 105 LE per month ($19), whereas it had been 250 LE ($36) earlier in the decade.

It would seem that such circumstances would have led to worker opposition to the state’s new, broad socioeconomic policies. Instead, workers’ protests mainly focused on short-term demands, such as food allowances and bonus increases. Successive regimes responded to these demands with a mixture of indifference, repression, and limited concessions. Rather than focus on the more structural factors that had brought about their more impoverished position, workers continued to ask the state to fulfill short-term requests. This lack of opposition to deep-seated policies helped set the stage for a post-revolution environment in which workers have little leverage, despite new forms of organization.

Since 2011, the trade union movement has not been able to exert enough pressure on the successive regimes to issue laws guaranteeing a minimum wage that applies to all or the right for unions to organize freely. As such, law 35 of 1976, which recognizes the ETUF as the only legitimate and legal federal body of labor representation, is still in place. An ensuing issue that afflicts the new unions and their federations is a dearth of financial resources, due to their inability to collect regular membership fees. This is because law 35 bans the establishment of more than one union per profession, with the result that union members are already paying ETUF fees. To date, the ETUF holds a monopoly on the funds that provide social security and pensions for members of affiliated trade unions. Contributions to the funds are included in workers’ membership fees, which are usually deducted automatically from their salaries. Workers willing to establish or join new unions that are independent from the ETUF are therefore faced with losing their claims to the funds into which they have been paying—making many reluctant to leave the ETUF umbrella.

For those who do branch out, new union leaders’ lack of experience creates weak organizations. This is a shortcoming that largely results from the absence of any tradition of unionism in Egypt, at least outside of the ETUF. This lack of institutionalism has also led to internal struggles, which in turn increase institutional fragmentation. New federations are constantly facing the problem of individual unions quitting the group. This predicament limits the federations’ capacity to exert organized pressure on the post-Mubarak leaders and has led to a preoccupation with preventing division.

In addition, the trade union movement has avoided politicizing its demands. In countries such as France, Spain, and Brazil, trade unions are allied (though not necessarily affiliated) with political parties, which have the duty of advancing workers’ interests and ensuring that they appear on the government’s agenda. But the Egyptian trade union movement’s leaders fear that the politicization of their respective unions will lead to further disintegration; in their view, an exclusive focus on common economic demands will lead to the unions’ consolidation. Another hindrance is workers’ suspicion of exploitation by political parties. This position is understandable given that Egyptian political parties are still weak and bring little to the labor movement. The absence of mutual interests between labor and the parties decreases the possibility of their alliance.

To be able to influence the state’s policies in a way that favors its interests, the labor movement must achieve both a high union density in relation to the size of the labor force and a high density of union affiliations in key areas of economic activity. According to the Central Agency for Public Mobilization and Statistics (CAPMAS), Egypt’s labor force is made up of 23.4 million workers, 61.2 percent of whom are salaried. The ETUF claims to have the affiliation of 3.8 million workers, the EFITU 2.4 million workers, and the EDLC 120,000 workers. If we consider those numbers as an approximate indicator of the labor movement’s organizational capacity, it is evident that at least 65 percent of the labor force is not yet organized.

Indeed, the presence of new trade unions among blue-collar workers remains low. Blue-collar workers in industrial public sectors, such as textiles, remain mostly organized under the ETUF. And private employers often deprive their employees of their labor rights, with workers suffering from severe repercussions or firing if they engage in labor activism. The EFITU and the EDLC, on the contrary, have a relatively strong presence within the white-collar workforce in the civil service and government sectors, such as among real estate tax collectors. It was thus not a coincidence that the minimum wage was exclusively applied to state employees as of January 1, 2014. Therefore, to be able to modify the system of state-labor power relations, new unions need to be strong not only within white-collar sectors but also among blue-collar ones.

With increased organization, workers as a whole would have a better chance of seeing their demands met. One such demand should be the guaranteed independence of the ETUF from administrative and financial oversight by the government, as well as the legally-established ability of other unions and federations to form freely. Such basic reforms, as well as the establishment of linkages between labor movements and (stronger) political parties, would allow Egypt’s unions to address the more structural problems that have brought about worker impoverishment and powerlessness.

The number of labor protests continues to increase, confirming the malaise surrounding established state-labor relations and the need for a new social contract. Though the state remains reluctant to permit the formulation of this new contract, it is likewise necessary for the state given Egypt’s current precarious economic condition and the state’s inability to stop the rise in demonstrations. In particular, the state needs structures that are able to manage conflict by creating venues for negotiation, thus avoiding the frequent strikes and protests that are the primary means for workers to air grievances. The organization of the labor movement via the establishment of new trade unions that are truly representative of the labor force would therefore be an effective solution to both counter the proliferation of protests and to allow labor to bargain more successfully.

Nadine Abdalla is a non-resident fellow at the German Institute for International and Security Affairs in Berlin. She holds a Ph.D. from Sciences-Po Grenoble, France and an MA in international relations from Sciences-Po Paris. She has worked with several Egyptian and European think tanks and research centers, such as the Arab Forum for Alternative Studies (AFA), Al Ahram Center for Political and Strategic Studies (ACPSS), and the Center for Studies and Research about the Arab World and the Mediterranean (CERMAM) in Geneva. Her research interests include social movements, labor and youth movements, social and political change in Egypt, and the transition to democracy in a comparative perspective. Nadine writes a weekly column for the Egyptian daily Al-Masry Al-Youm. This article was originally published in the Middle East Institute.