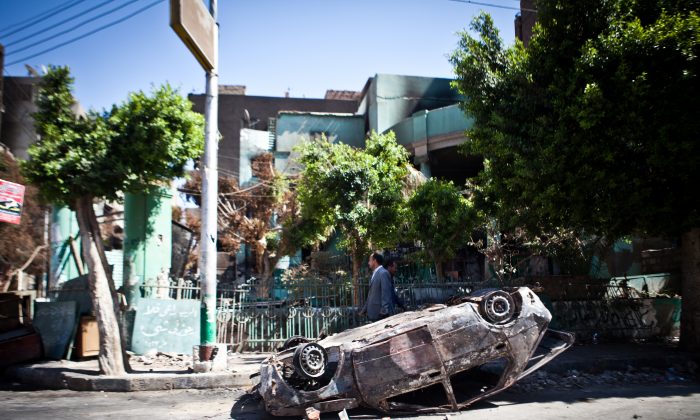 A building belonging to a Christian charity organization in the central Egyptian city of Minya that was ransacked earlier in the month. Militants killed 25 Egypt police in the deadliest attack of its kind in years, as the country struggles to deal with a crisis sparked by the ouster of President Mohammed Morsi. The photo was taken Aug. 18, 2013. (Virginie Nguyen Hoang/AFP/Getty Images)
Opinion

Egyptian Christians Are Under Siege

Sunday prayers were canceled for the first time in 1,600 years at the Orthodox Monastery of the Virgin Mary and Priest Ibram in Degla, south of Minya, in Egypt on Aug. 18, according to Nina Shea, director of the Hudson Institute’s Center for Religious Freedom. This happened because three churches had been destroyed by a mob. That wasn’t the only incident of violence against Christians that has resulted in dozens of deaths and widespread destruction of Christian properties since Mohammed Morsi was removed from power by the Egyptian military.

Although Christianity is a minority religion in Egypt, Egyptian Christians, known as Copts, account for 5–20 percent of the country’s population. Despite that relatively small proportion, Egypt’s Christian population is the largest in absolute numbers in the greater Middle East and North Africa. Today, Christians make up about 5 percent of the entire Middle Eastern population, down 20 percent from a century ago.

Ninety-five percent of Egyptian Christians belong to the Coptic Orthodox Church of Alexandria, an Oriental Orthodox Church. It is estimated that it has approximately 4 million to 8 million followers in Egypt; in addition, it has 3 million to 4 million followers abroad. According to the magazine Coptic Christianity, the actual number of Copts may be between 11 million and 13 million. In 2011 alone, after Egyptian President Hosni Mubarak fell from power, 93,000 Copts left Egypt.

There is widespread belief that Christians are being made the scapegoats by the Muslim Brotherhood for the fall of Morsi. However, this position seems to ignore that the revolt against Morsi was led not by Christians, but by political liberals, middle-class youth, and even secular Muslims who were opposed to Morsi and the Muslim Brotherhood trying to impose a strict Islamist regime in the country.

Writing this week in the National Review Online, Rich Lowry said, “Egypt is in the midst of an anti-Christian pogrom. Supporters of ousted Muslim Brotherhood President Mohamed Morsi are lashing out at the country’s Copts for the offense of being Christian in Egypt.”

As of Aug. 21, several dozen convents, monasteries, schools, Christian homes, and businesses have been looted and destroyed by Islamist rioters, and the Christian pope remains in hiding, fearing for his life. In Cairo, Franciscan nuns were marched through the streets as mobs shouted abuses at them.

Presently, the highest concentration of Christians is in the villages of Upper Egypt. In Minya’s governorate, about 150 miles south of Cairo where many of the incidents took place, Christians make up about 35 percent of the population, the highest in Egypt. But Minya is also an Islamist stronghold and the heart of the Salafi Muslims.

Although the Christians and the Muslims had lived in relative peace, serious incidents between both communities began after Morsi’s overthrow on July 3. Businesses in downtown Minya were marked with large Xs—red for Christian-owned stores and black for Muslim’s owned stores—making it easier to identify the Christian ones as targets for attacks.

The attacks on Christian properties were not rapidly investigated by the police, despite the owners’ requests. Although the governor of Minya, Gen. Salah El Din Zidaya, admitted the lack of police response, he said that it was because the security forces were fighting off Islamists attacks in other areas. According to Bishop Makarias, head of Minya governorate’s Coptic community, the government is using the Christians to justify its repression of the Muslim Brotherhood.

As attacks against Christians continue, international human rights organizations have accused the government of not protecting them, and demand stronger actions against the attackers. As Hassiba Hadja Sahraoui, Amnesty International’s Middle East and North Africa deputy director, stated, “It is a serious dereliction of duty that the security forces failed to prevent these sectarian attacks and protect Coptic Christians. Attacks against Coptic Christians must be investigated and those responsible brought to justice.”