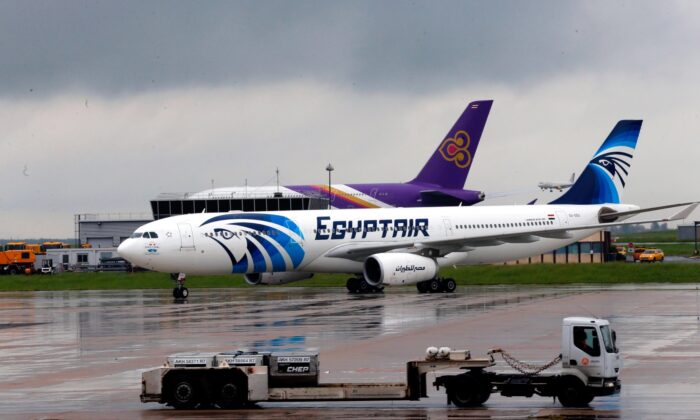 This picture taken on May 19, 2016, shows an Egyptair Airbus A330 from Cairo taxiing at the Roissy-Charles De Gaulle airport near Paris after its landing a few hours after the MS804 Egyptair flight went missing. (Thomas Samson/AFP via Getty Images)
Europe

An EgyptAir flight that crashed in 2016 while traveling from Paris to Cairo was caused by a pilot smoking a cigarette in the cockpit and starting a fire, according to a report.

EgyptAir flight MH804 disappeared from radar on May 19, 2016, with 66 passengers and crew on board, all of whom were killed. The wreckage of the Airbus A320 was found near Karpathos Island, about 220 miles southeast of Athens, approximately one month later.

The confidential 134-page report, viewed exclusively by Italian news organization Corriere Della Sera, concluded that pilot, Mohammed Saied Ali Shokair, lit a cigarette mid-flight—which was not forbidden at the time by the carrier—causing oxygen that was leaking from his co-pilot’s mask to start a fire triggered “by a spark or a flame.”

French aviation experts found that the cigarette ignited due to one of the oxygen masks leaking after a valve had been placed in the incorrect position when it was changed by a maintenance worker three days earlier and set to “emergency mode.” The Airbus manual states that “an oxygen leak may occur” when a mask is in this position.

Meanwhile, another factor supporting France’s Bureau of Enquiry and Analysis for Civil Aviation Safety (BEA) investigation is the ashtrays in the aircraft’s cockpit needed to be replaced two months before the crash because of reported excessive usage.

Two black boxes were recovered from the Airbus A320 wreckage and sent to BEA for examination. Now, six years later, additional details on what might have caused the crash are released.

The latest findings are based on audio data of the black boxes that also captured the pilot and co-pilot expressing that “they both feel tired from this night flight and from lack of sleep.” However, according to the report, experts found that both pilots’ resting hours were respected.

A report conducted in 2018 by BEA concluded that the plane went down because of a fire onboard the aircraft upon an analysis of black box data—though that investigation stopped short of explaining what specifically caused the fire to ignite.

Egyptian aviation officials initially said terrorism had been responsible for the incident, claiming they recovered traces of explosives in the remains of victims of the flight. To this day, they have refused to publish a report on the incident and declined to cooperate with French authorities.

Paris has ruled out terrorism and France’s aviation safety agency said the aircraft transmitted automated messages indicating smoke in the cabin and a fault in the flight control unit minutes before losing contact.

Moments before the plane started sinking, seven “dispatch” messages were also sent out in two seconds by the ACARS system, which also indicated there was a smoke presence on board the aircraft.

The latest findings were sent one month ago to the Paris Court of Appeals, which is currently investigating the deadly plane crash for manslaughter charges, as 15 French citizens were on board the plane.