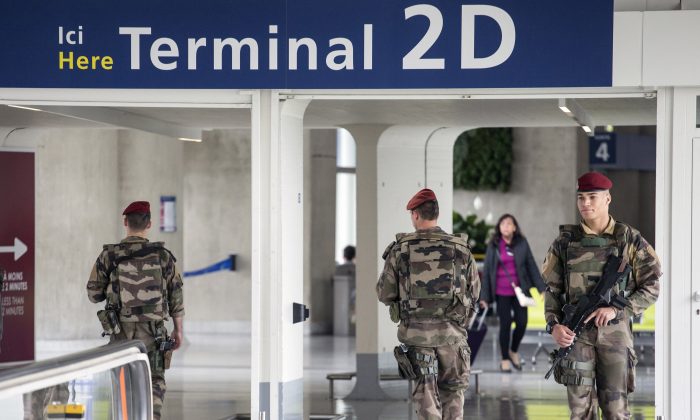 PARIS—Explosives in the form of paper, or concealed in a medicine-sized bottle and looking like salt. Tiny electric detonators. Security agents at the main airport in Paris are trained to detect all manner of increasingly sophisticated devices that could doom a flight.

But the chilling reality is that security is ultimately fallible.

“The infinitely perfect does not exist,” said Sylvain Prevost, who trains airport personnel seeking the coveted red badge that allows them access to the airport’s restricted areas.

That is especially true when 85,000 people at Charles de Gaulle airport hold red badges, which are good for three years, and many of them work for a host of private companies. Add to the mix, concern over religious extremism in an age of increasing mind-altering radicalization that can transform people within months.

Airport authorities in France and elsewhere are painfully aware of the risks, but hesitant to speculate as to whether an airport security lapse could have contributed to Thursday’s crash of EgyptAir Flight 804. The Airbus A320 took off from Charles de Gaulle with 66 people on board before lurching wildly to the left and right, spinning around and crashing into the eastern Mediterranean Sea. The cause of the crash remains unclear.

France has been in a state of emergency since Nov. 13 Paris attacks that killed 130, after two deadly attacks earlier in 2015, all with links to the Islamic State group. Security is being further reinforced ahead of the French Open, which starts Sunday, and the Euro 2016 soccer championships, a month-long tournament that begins June 10.

The March 22 attacks that killed 32 people in Brussels, at the airport and in a metro station, add to the sense that public places like airports are vulnerable.

“It’s possible to get any kind of dangerous object through every airport in the world due to the contradiction between time and security,” said noted criminologist Alain Bauer. “Everybody wants to get in the plane fast …. so everybody compromises on time and security.”

French investigators are ground staff at Charles de Gaulle who had a direct or indirect link to Flight 804, from baggage handlers to gate agents, a judicial official said, speaking on condition of anonymity because he was not authorized to speak publicly on the probe.

Since the January 2015 Charlie Hebdo newsroom massacre, French authorities withdrew or refused 85 red badges, according to Paris Aeroports, nearly 70 of them taken away within a month after last November’s attacks.

Most were for the “phenomenon of radicalization,” the chief of Paris Aeroports said on Europe 1 radio in December. Badges can also be removed for other reasons, for example when someone gets in trouble with the law and gets a police record. A long absence could spur an investigation.

One of two suicide bombers in the Brussels airport attack, Najim Laachraoui, had been an airport employee, and Sami Amimour, one of the team of terrorists that attacked Paris’ Bataclan concert hall in November, had once worked for France’s RATP transport authority.

After the November attacks, “we re-examined the situation of the entire (airport) staff and as soon as there was a question, not even a suspicion but a question, these badges were withdrawn,” Transport Minister Alain Vidalies said Friday.

As many as 4,000 private lockers at Charles de Gaulle were searched after the Paris attacks said Serge Nybelen, secretary general of the powerful CGT union chapter at the airport. He said investigators found nothing incriminating.

“There can be little groups” of the same origin, “but I have no knowledge of people who radicalize,” Nybelen said, adding that he would have been informed.

People with red security badges are expected to watch for suspicious behavior around them, according to Paris airport chief Romanet and others.

The badges are awarded by the deputy prefect for airports, a state representative, after a training course and an exam plus security checks by police.

A decade ago, officials cracked down on what they said was infiltration of Islamists at Charles de Gaulle and Orly, the second Paris airport, closing down some 15 clandestine prayer rooms at the two airports. Security clearances were withdrawn from 72 people, some for issues identified in letters seen by The Associated Press as “behavior” and “attitude.” Employees who lost their clearance said at the time they were questioned about their religious practice and whether, for instance, they had traveled to Mecca, Islam’s holy site.

“It’s not a problem of religion. It’s a problem of the person,” said Sylvain Prevost, with Aviation Security Training Center. Weapons of destruction have evolved along with radicalization.

“Today, the system of airport security as we knew it has been redefined,” Prevost said.

“Here you see an explosive in the form of paper … which can be hidden in a portable computer or in a small tablet,” he said at his training center, showing the barely detectable element on a screen — made clearly visible only when a special filter was applied.

Sharp objects like knives made with polymer, an extremely hard plastic, can escape a metal detector, he said.

“The real challenge today is the radioscopic analysis,” he said, referring to X-Rays to detect such objects bundled deeply into luggage.

Prevost suggested that complicity with an outsider would be the most likely way to sabotage an aircraft, because the airport “is a bubble.” However, he said “the threat is everywhere and changing.”