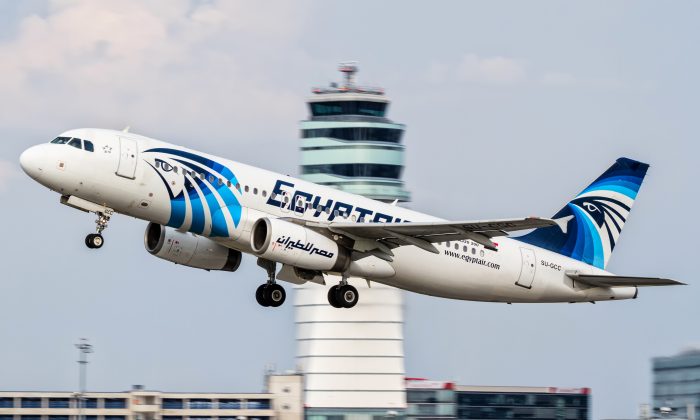 This August 21, 2015 photo shows an EgyptAir Airbus A320 with the registration SU-GCC taking off from Vienna International Airport, Austria. Egyptian aviation officials said on Thursday May 19, 2016 that an EgyptAir plane with the registration SU-GCC, traveling from Paris to Cairo with 66 passengers and crew on board has crashed off the Greek island of Karpathos. Meanwhile, Egypt's chief prosecutor Nabil Sadek says he has ordered an "urgent investigation" into crash. Sadek instructed the National Security Prosecutor to open an "extensive investigation" in the incident. (AP Photo/Thomas Ranner)
International

EgyptAir Crash Likely Caused by a Struggle in the Plane’s Cockpit, Expert Says

The former head of flight operations for the U.K.’s Civil Aviation Authority says that there might have been a struggle on the flight deck of the EgyptAir plane that crashed on Thursday morning.

“One’s inclined to go towards the theory that there had been some interference on the aircraft, and on the flight deck, with the control of the aircraft,” Captain Mike Vivian was quoted as saying by The Independent.

He told Good Morning Britain: “Well, that is a really interesting question and it is a worry that has been in security minds for a long time now,” via the Independent.

EgyptAir flight MH804 disappeared from radar with 66 passengers and crew on board. It was traveling from Paris to Cairo. Wreckage of the plane has been discovered.

“It is a major worry and I do not think it is insignificant that lots of people at Paris Charles de Gaulle lost their airside pass because of radicalization,” he added. “The question has to be how did they get their in the first place and what sort of screening is going on vis-a-vis these airport employees.”

An EgyptAir flight in 1999 from New York City to Cairo crashed in the Atlantic, and an investigation found that one of its pilots deliberately caused the plane to go down. Egypt has insisted the cause was a mechanical failure. In 2014, one of the pilots of a Germanwings plane killed himself and 149 other people by crashing into the mountains.

David Learmount, former RAF pilot and Consulting Editor at Flight Global, said caution should be urged in lieu of any official explanation about Thursday’s crash.

“My money and a lot of people’s money is on this being sabotage, [though] it’s not certainly that,” he stipulated, according to Sky News. “I think the bomb is the more likely. With the fast turnarounds that aeroplanes do today, it’s quite difficult to check every part of them,” he added.

“So if you have an employee who has access to the aeroplanes as a part of his or her job and they have been subverted by a terrorist organisation like Daesh [also known as Islamic State (IS), ISIS or ISIL], this could happen,” he added.

“We can theorize because we do know that the Sharm El Sheik disaster last year, the Russian airliner that came down over Sinai, we do know that that is sabotage but we still don’t know who did it and how they did it,” he said, per Huffington Post UK.

Both Learmount and Vivian pointed out that there are gaps in airport security despite increased surveillance since the Sept. 11, 2001, attacks.

Learmount continued: “Any head of security at any airport is right to be worried about this. Now, Paris Charles de Gaulle’s head of security actually did get rid of a few people who they thought might have been subverted by Daesh and that was after terror attacks in Paris over the last year or two. They are constantly aware of this. The trouble is, you can security clear an employee and they can then be subverted, they can then be got at by an idealistic organisation and converted and the person you had cleared for security no longer is secure.”

Donald Trump and Hillary Clinton React to the EgyptAir Crash

“I would be dishonest if I said it was 100% secure because it isn’t,” Vivian said of airplane cockpits nowadays.

French Foreign Minister Jean-Marc Ayrault said Friday on France-2 television that there is “absolutely no indication” of what caused the plane to go down.