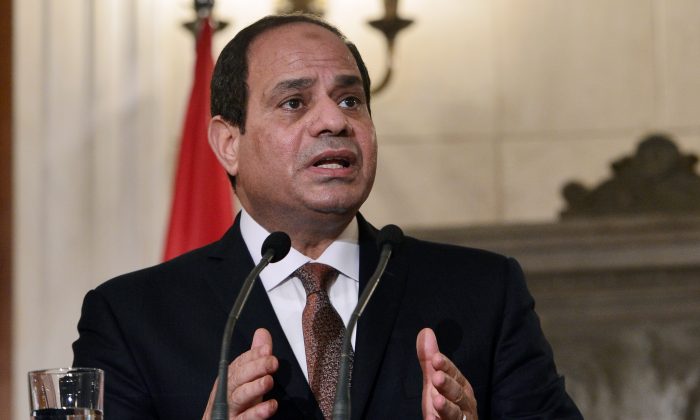 CAIRO—Egypt’s president, speaking ahead of next week’s anniversary of the 2011 uprising that toppled longtime ruler Hosni Mubarak, vowed on Saturday to unleash a firm response to any unrest and to press ahead with the fight against Islamic militants.

Abdel-Fattah el-Sissi spoke at a ceremony marking Police Day, which falls on Jan. 25, the day the uprising began five years ago.

He awarded medals to the families of nearly 40 policemen killed in militant attacks, including eight generals and three colonels. Most of the widows received the medals while accompanied by their children, including infants. El-Sissi, his eyes frequently welling up, carried the infants, hugged and kissed older children and posed with them for photos.

Addressing the nation, el-Sissi said of those killed in terror attacks: “Don’t let their blood go in vain and, by the way, we will not allow that ourselves, and I am saying that so everyone listens and takes note.”

“The security and stability of nations are not to be toyed with,” he said, adding that the security of Egypt was the responsibility of all Egyptians, not just the police and the army.

El-Sissi, who as military chief overthrew in 2013 Islamist President Mohammed Morsi, has presided over a sweeping crackdown on dissent, jailing thousands of Islamists and scores of secular, pro-democracy activists who fuelled the 2011 uprising. He was elected to office in 2014 with a landslide.

El-Sissi made no mention of the January 2011 uprising in his 30-minute address, He has in the past paid tribute to the uprising, just as he has done to the so-called “June 30 revolution,” the day in 2013 when millions of Egyptians demonstrated on the streets against the rule of Morsi and his Muslim Brotherhood. However, some of el-Sissi’s supporters in the media and in politics have taken to publicly vilifying the 2011 uprising as an attempt by foreign powers to weaken Egypt through local saboteurs.

The president spoke a day after the army said it would beef up security measures to safeguard vital installations and “confront any attempt to violate the law, impact the nation’s security and stability.” The announcement came amid an ongoing crackdown on dissent ahead of Monday’s anniversary. Authorities have visited and searched as many as 5,000 apartments in the past 10 days, primarily in central Cairo, seeking to prevent protests. The administrators of several Facebook pages suspected of links to the Brotherhood have been detained and accused of using social media to call for protests.

Most secular and liberal pro-democracy activists are not expected to take to the streets on Monday to mark the anniversary, with many saying that doing so would only add to the number of protesters killed or detained by police. Morsi supporters, however, have been calling for protests, but these are likely to be restricted to neighborhoods where they maintain a heavy presence, not landmark squares or main streets.

Police have shown zero tolerance for anti-government street demonstrations since Morsi’s ouster and, in view of el-Sissi’s comments Saturday, are not likely to change that policy on Monday. However, there are fears that militants might take advantage of the anniversary to stage attacks against security forces.