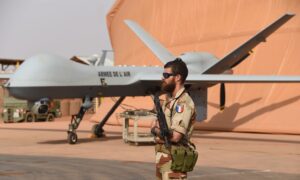 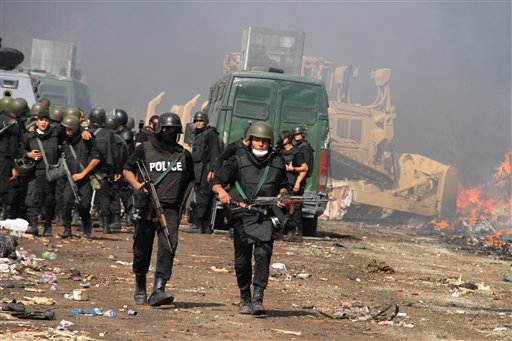 The health authorities in Egypt have announced the death toll is now at 149, with more than 1,400 injured nationwide. A security source told NBC News that 543 people had been arrested.  A month-long nationwide state of emergency was declared earlier Wednesday.

“I cannot shoulder responsibility for single drop of blood,” ElBaradei said as he resigned, according to the BBC.

ElBaradei is a former diplomat and Nobel laureate. He led the main liberal opposition coalition that stood with Defense Secretary Gen. Abdel-Fattah el-Sissi as he announced Morsi’s ouster. ElBaradei became director general of the International Atomic Energy Agency (IAEA) in December 1997. He was awarded a Nobel Peace Prize in 2005 for his IAEA work “to prevent nuclear energy from being used for military purposes and to ensure that civil use of nuclear power takes place under reliable international control,” according to the Nobel Prize website.

Clashes also broke out across the capital, though they were focused on the main sit-in camp of Morsi and the Muslim Brotherhood supporters. The violence is spread across the country, not limited to Cairo. The divide deepens as Islamist anger rises; Islamist Morsi supporters say the new military leadership is not leaving any room for Islamist representation. Pro-Morsi demonstrations have been ongoing for about six weeks.

Police stations, government buildings, and Coptic Christian churches have been attacked and burned.

Death toll counts vary widely, according to NBC correspondent Ayman Mohyeldin, who said many bodies have also not been cleared from the main protest sites in Cairo.

The Egyptian Central Bank instructed commercial banks to close branches in areas affected by the chaos, a sign of alarm that the violence could spiral out of control. The landmark Giza Pyramids and the Egyptian Museum also were closed to visitors for the day as a precaution, according to the Ministry of Antiquities.

A White House spokesperson told NBC Wednesday:  “We strongly oppose a return to a state-of-emergency law and call on the government to respect basic human rights such as freedom of peaceful assembly and due process under the law.  The world is watching what is happening in Cairo.  We urge the government of Egypt and all parties in Egypt to refrain from violence and resolve their differences peacefully.”