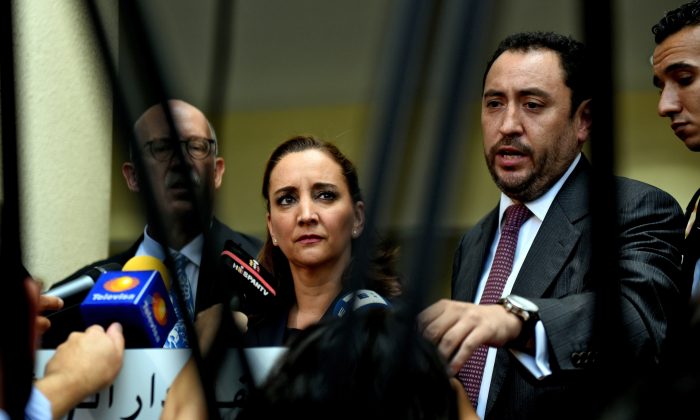 CAIRO— Egypt’s foreign minister said Wednesday that the killing of 12 people in an accidental attack by security forces on a group of Mexican tourists traveling in the western desert was “regrettable,” but stopped short of apologizing.

Sameh Shoukry made the remarks during a joint press conference with his Mexican counterpart Claudia Ruiz Massieu, who also met with Egypt’s president. She called for a “comprehensive, prompt and transparent investigation” into the “tragic and unprecedented events” on Sunday.

Ruiz Massieu, who arrived in Cairo earlier Wednesday, met with survivors of the attack accompanied by their family members. She did not relay survivors’ accounts of what happened.

“I want to stress that for Mexico and for all the people of Mexico this has been a terrible incident, this has been an unprecedented incident,” she said at the press conference.

Mexico’s ambassador to Egypt had earlier said that survivors told him the tour group’s vehicles were attacked by helicopters. Eight Mexicans were killed in the attack and six were wounded. The nationalities of the other four people who were killed are not yet known.

Ruiz Massieu said the survivors were in stable condition and “evolving favorably.” She had said earlier she would speak with Egyptian President Abdel-Fattah el-Sissi about repatriating the survivors and the remains of the dead.

Egyptian Foreign Minister Sameh Shoukry expressed condolences but declined to give an account of the circumstances surrounding the deaths, saying details will be provided once the full investigation has concluded. Egyptian officials initially said the tourists, who were in a group of SUVs, had strayed into a restricted area where security forces were pursuing suspected terrorists.

Ruiz Massieu said information provided to Mexican officials by the survivors “indicates that the group of Mexican tourists had organized their itinerary through an accredited tourism agency.”

“They had arranged a number of trips over the space of two weeks — and for this purpose they had all the necessary permits. We will wait for the investigation to end to know the facts and to be able to clarify them,” she said.

In an open letter to the Mexican people on Tuesday, Shoukry said the facts of the case remain “confusing,” and promised a thorough and impartial investigation.

“We still do not know if the convoy was simply in the wrong place at the wrong time, or if some error was involved,” Shoukry wrote in letter published in Mexican newspapers on Wednesday.

“I assure the Mexican people that an impartial inquiry is being held, under the leadership of Egypt’s prime minister himself, and that Egypt is prepared to do its utmost to help in any way it can,” the letter said.

“It would defy reason to think that Egypt’s law enforcement authorities could ever deliberately harm innocent tourists,” he wrote.

At the press conference, when asked whether an error had led to the killings, Shoukry said “it is the objective of the Egyptian government to scrutinize all the potential circumstances related to this incident.”

The incident, among the deadliest involving tourists in Egypt, comes as the country is trying to revive its vital tourism industry after the turmoil following the 2011 uprising that toppled President Hosni Mubarak.

Egypt has mainly been battling insurgents in the northern Sinai Peninsula, on the other side of the country, where Islamic militants stepped up attacks on security forces after the military ousted Islamist President Mohammed Morsi in 2013 amid massive protests against his rule.

But in recent months, militants loyal to the Islamic State group have carried out a series of attacks in more central parts of the country, including the bombing of the Italian Consulate in Cairo and the kidnapping and beheading of a Croatian oil surveyor who was working in the capital.

In recent years, however, it has been the subject of security concerns because of the long, porous border with Libya. Egypt has been flooded with weapons, mostly from Libya, since the 2011 uprising that toppled longtime Libyan dictator Moammar Gadhafi and plunged that country into turmoil.