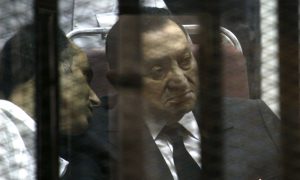 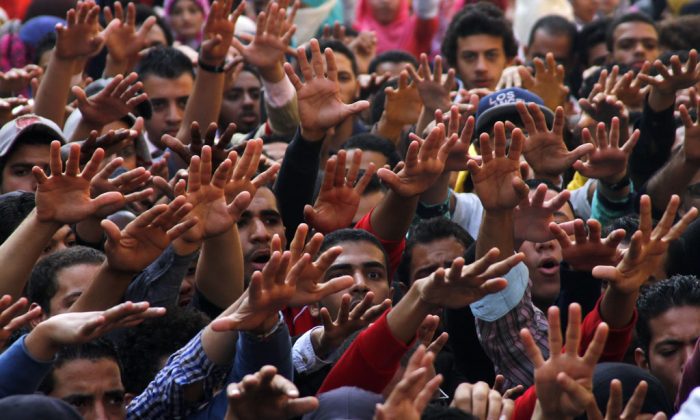 A group of students protest against the dismissal of the murder case against toppled President Hosni Mubarak over the killing of protesters during Egypt’s 2011 uprising, at Cairo University, Cairo, Egypt, Sunday, Nov. 30, 2014. Judge Mahmoud al-Rashidi dismissed the case on a technicality, saying Mubarak’s referral to prosecution ignored an earlier decision by prosecutors not to try him. Al-Rashidi did, however, find Mubarak’s security chief and six of his top aides not guilty on charges of ordering the killings, a ruling that implicitly absolves Mubarak. (AP Photo/Ravy Shaker, El Shorouk newspaper)
Africa

CAIRO—Egypt’s top prosecutor referred 439 people to military tribunals on Saturday for acts of violence including the killing of three policemen last year, while authorities denied entry to a prominent American scholar arriving at Cairo’s international airport, the latest incidents in the country’s sweeping crackdown on dissent.

Security officials said that one group was 139 men he described as Islamists from the southern province of Minya, while another was comprised of 300 from the Nile Delta province of Beheira. The cases involve last year’s wave of violence that came in retaliation to a bloody police dispersal of an Islamist sit-in.

The officials spoke on condition of anonymity because they was not authorized to speak to the press.

In October, Egypt’s President Abdel-Fattah el-Sissi ordered the military to join forces with police in guarding vital state institutions. The decree stipulated that perpetrators of any attacks against state facilities will be tried in front of military tribunals.

Human Rights Watch said Egypt’s military courts “lack even the shaky due process guarantees provided by regular courts.” The group said the decree “risks militarizing the prosecution of protesters and other government opponents.”

Earlier this month, 188 people were sentenced to death on charges of killing 11 policemen. Since the ouster of Islamist President Mohammed Morsi last year, Egypt has faced international criticism for mass trials with heavy sentences.

The Muslim Brotherhood group has been branded a terrorist organization, and the crackdown has extended to liberal and leftist critics of the government.

Michele Dunne, senior associate at the Carnegie Endowment for International Peace and a former U.S. diplomat, was barred from entering Cairo and deported to Germany. She had accepted an invitation to speak at a conference organized by the Egyptian Council for Foreign Affairs, made up primarily of former Egyptian diplomats.

In her work, Dunne is frequently critical of the Egyptian government.

From Frankfurt she said on Twitter that some Egyptians complain she doesn’t pay enough attention to pro-government views. But “when I accept invite to (conference) of pro (government) group they deny me entry. Go figure.”

Last August Human Rights Watch executive director Ken Roth and regional director Sarah Leah Whitson were also denied entry to Egypt ahead of the publication of a report accusing the government of possible crimes against humanity.