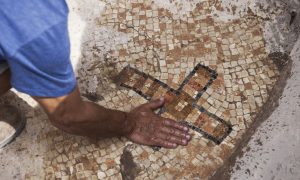 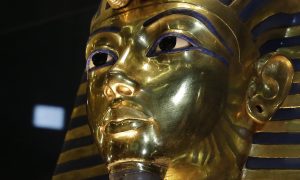 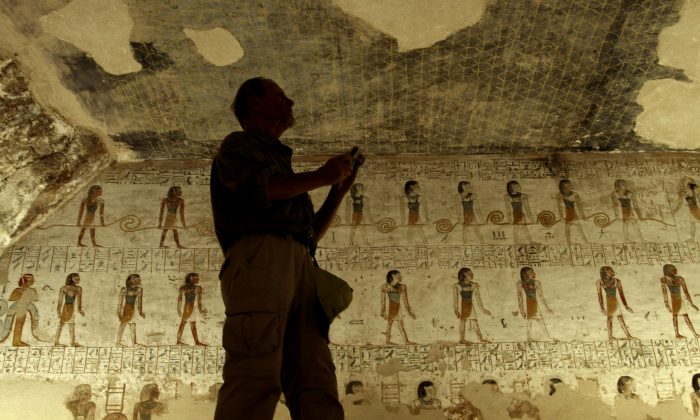 A tourist takes photos of inscriptions on the walls of King Merenptah's tomb in the Valley of the Kings in Luxor, Egypt, on Nov. 22, 2012. Egypt says there is a 90% chance that hidden chambers will be found within King Tutankhamun's tomb, based on the preliminary results of a new exploration of the 3,300-year-old mausoleum. Speaking at a press conference in Luxor on Saturday, Nov. 28, Mamdouh el-Damaty said the results will be sent to Japan for a month-long analysis before the search is resumed. (AP Photo/Nariman El-Mofty)
archaeology

CAIRO—Egypt on Nov. 28 said there is a 90 percent chance that hidden chambers will be found within King Tutankhamun’s tomb, based on the preliminary results of a new exploration of the 3,300-year-old mausoleum.

Researchers say the discovery of a new chamber could shine new light on one of ancient Egypt’s most turbulent times, and one prominent researcher has theorized that the remains of Queen Nefertiti might be inside.

Egypt began the search for the hidden chamber last week. Announcing the results of three days of testing in the southern city of Luxor, Antiquities Minister Mamdouh el-Damaty said the findings will be sent to Japan for a monthlong analysis before the search is resumed.

Luxor, in southern Egypt, served as the pharaonic capital in ancient times and is home to sprawling temples and several ancient tombs.

British Egyptologist Nicholas Reeves theorizes that Tutankhamun, better known as King Tut, who died at the age of 19, may have been rushed into an outer chamber of what was originally Nefertiti’s tomb. Famed for her beauty, Nefertiti was the subject of a famous 3,300-year-old bust.

Reeves reached his theory after high-resolution images discovered what he said were straight lines in King Tut’s tomb. These lines, previously hidden by color and the stones’s texture, indicate the presence of a sealed chamber, he said. The images were later broadcast live on national television last September.

Nefertiti was the primary wife of the Pharaoh Akhenaten, who unsuccessfully attempted to switch Egypt to an early form of monotheism. Akhenaten was succeeded by a pharaoh referred to as Smenkhare and then Tut, who is widely believed to have been Akhenaten’s son.

Tut, Nefertiti, and Akhenaten’s family ruled Egypt during one of its most turbulent times, which ended with a military takeover by Egypt’s top general at the time, Horemheb. The whole family’s names were wiped out from official records later on.

This is the second find to be announced this week. On Nov. 24, el-Damaty said the Austrian Archaeological Institute discovered a “giant fence” dating back over 3,500 years at the site of another ancient capital city, Avaris. The sandstone fence is least 500 meters (yards) long and 7 meters (yards) thick, antiquities official Mahmoud Afifi said.