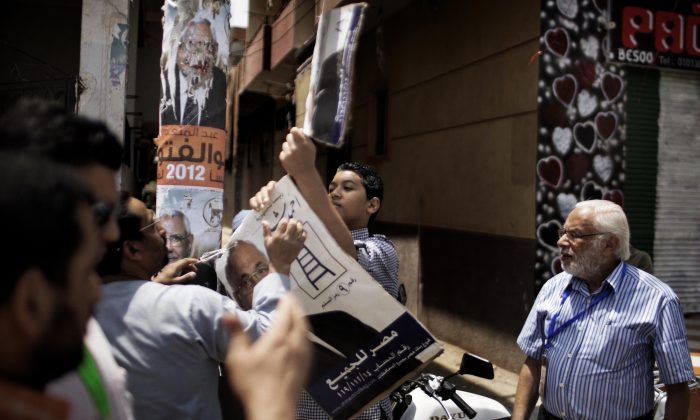 Egyptian political activist and electoral monitor, George Ishak (R), oversees the removal of campaign posters outside a polling station in the rural village of Namoul, in the village of Namul, north of Cairo, on the second day of the country's landmark presidential election on May 24, 2012. (Marco Longari/AFP/GettyImages)
Africa

Egypt has jailed thousands of Brotherhood members and other dissidents since the military overthrew President Mohammed Morsi of the Muslim Brotherhood in 2013.

George Ishak, a member in the National Council for Human Rights, said the delegation visiting the Tora Maximum Security Prison, popularly known as al-Akrab, or The Scorpion, was denied access to wards and was not allowed to meet with five ill inmates it had asked to see.

Instead of letting them see the patients, prison authorities brought them the patients’ files, saying a medical committee from the prison follows such cases. “This didn’t satisfy us and we documented that,” said Ishak.

Prison authorities told them other inmates they requested to see were not in the prison, and requested their full names to check on their whereabouts.

Ishak said prison authorities informed them they shouldn’t go inside the wards “because people are very agitated because they are all Brotherhood.” He said authorities claimed there would be “chaos” if they visited.

Council member Ragia Omran, a well-known rights lawyer, said she was not allowed to take part in the visit. She said that ahead of the tour and following complaints, prison authorities brought warm clothes for the prisoners and conditions have improved. “Will conditions get worse, though, after the visit is over?” she asked.

Ishak said they met with three inmates, who insulted the delegation and refused to cooperate, viewing them as part of the government. The council is funded by the government and its members are appointed by the state. However, the body includes individuals who have been critical of the government.

The three inmates they met were wearing warm clothes, he said.

A Brotherhood member and former parliamentarian was asked by prison officials if he had been beaten or tortured and told the council no. But Omran said she was told that prisoners were threatened with retribution if they spoke out about abuse. The delegation was not allowed to meet with any prisoners without authorities present.

Egyptian law only allows surprise inspections of prisons by prosecutors or Interior Ministry officials. Inspections by the rights council and other state-sanctioned bodies require prior approval.

A spokesman for the Interior Ministry could not be reached for comment late Tuesday.