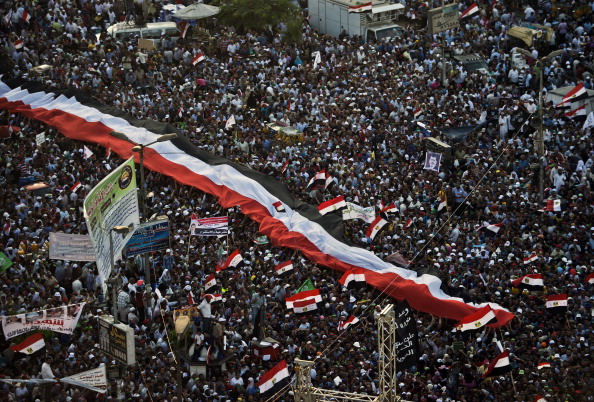 Supporters of Egyptian president Mohamed Morsi and the Muslim Brotherhood gather during a demonstration next to the Rabaa El-Adaweya mosque in the capital Cairo, on June 28, 2013. (KHALED DESOUKI/AFP/Getty Images)
Middle East

Throngs of protesters have entered Egypt’s Tahrir Square in Cairo and the second-largest city, Alexandria, to demonstrate against Mohammed Morsi.

Reports say that hundreds of people have been injured in clashes between pro-Morsi protesters and anti-government demonstrators.

The U.S. Embassy in Cairo said on Friday that it is looking to reports that an American was killed in the clashes.”We are seeking to confirm report of American death in alexandria. thank you for concern,” it tweeted.

Protesters have taken to the streets a year after Morsi took office. They have said that despite electing him, problems in the country have persisted.

“There are no services. We can’t find diesel or gasoline,” Mohamed Abdel Latif, a protester, told Reuters. “We elected Morsi, but this is enough.”