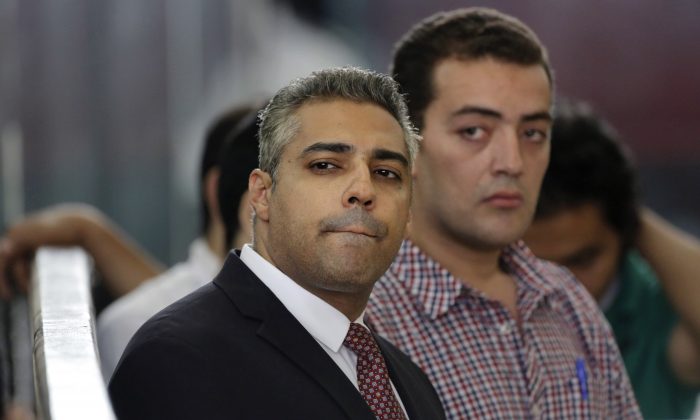 CAIRO—The Egyptian president on Wednesday pardoned two journalists for Al-Jazeera English and dozens of human rights activists, state media and the lawyer of one of the reporters said.

The two — Canadian journalist Mohamed Fahmy and Egyptian national Baher Mohammed — were expected to be released later in the day.

The state-run MENA news agency said a third person from the case — which included multiple other defendants along with Australian journalist Peter Greste — was also pardoned but was not identified by name. Greste was deported earlier this year.

A tweet from Fahmy’s account Wednesday afternoon said “Thank you to all the supporters sending us the news, we have heard and are very happy. AJ Staff is Free!”

“I don’t know what to say. It is done. Thank God, thank God,” said Fahmy’s brother Adel, reached by The Associated Press by phone from Kuwait.

The three were sentenced to three years in prison last month for airing what a court described as “false news” and biased coverage. There was no immediate comment from the Al-Jazeera network, which is based in Doha, Qatar.

Prominent Egyptian activists Yara Sallam and Sanaa Seif were among about 100 people pardoned by President Abdel-Fattah el-Sissi, according to MENA, on the eve of the major Muslim holiday of Eid al-Adha, when Egyptian presidents usually pardon convicts for health or other reasons.

The pardon also comes a day before el-Sissi is to travel to New York to attend the United Nations General Assembly.

Fahmy’s lawyer, Khaled Abu Bakr, confirmed the pardon him and said he hopes it will be “repeated with many others jailed.”

“I was sure the president was going to issue such a decision. Mohammed is a professional and innocent journalist,” Abu Bakr told AP. “This decision will have positive impact on the media and international level.”

On Tuesday in Australia, Greste attended the dedication of a war correspondents memorial at the Australian War Memorial in Canberra. Prime Minister Malcolm Turnbull spoke to him and vowed to press Egypt for a pardon for him and his colleagues, according to Turnbull’s Facebook page.

The long-running trial of the three Al-Jazeera staff is entangled in the wider political conflict between Egypt and Qatar, where Al-Jazeera is based, following the Egyptian army’s 2013 ouster of Islamist President Mohammed Morsi, a Muslim Brotherhood member.

The case began in December 2013, when Egyptian security forces raided the hotel suite used by Al-Jazeera at the time to report from Egypt.

The journalists began using the hotel as a base of operations after the Al-Jazeera English office near Tahrir Square was raided by police. Authorities arrested Fahmy, Greste and Mohammed, later charging them with allegedly being part of Morsi’s Muslim Brotherhood, which authorities have declared a terrorist organization, and airing falsified footage intended to damage national security.

The three men initially were convicted on June 23, 2014, with Greste and Fahmy sentenced to seven years in prison and Mohammed to 10 years for also being found with a spent bullet casing. That ruling was later overturned on appeal by Egypt’s Court of Cassation, which said the initial proceedings were marred by violations of the defendants’ rights, but a retrial was ordered, ending with last month’s convictions.

A spokeswoman for Canada’s foreign affairs department Rachna Mishra said Canada is “pleased” with the pardon and “will assist to facilitate his departure from Egypt. We look forward to Mr. Fahmy reuniting with his family and loved ones, and his return to Canada.”

Fahmy gave up his Egyptian nationality during the trial in hopes of being deported to Canada.

The two activists Sallam and Seif were sentenced in October with 21 others for staging a peaceful protest near the presidential palace to call on el-Sissi to abolish a law that severely restricts the right to stage protests. Their sentence was reduced to two years in December.

The pardons were given to 100 people “who have received final prison verdicts in cases related to breaking a protest law or infringing on the police forces’ actions, in addition to a number of health-related and humanitarian cases,” the president’s office said in a statement emailed later Wednesday.