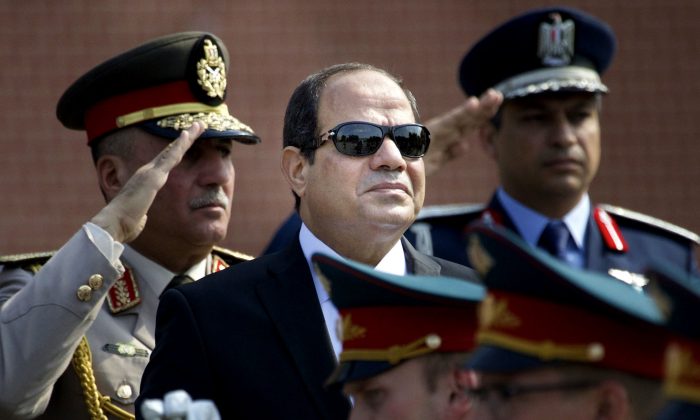 Egyptian President Abdel-Fattah el-Sissi (C) reviews honor guards, as he takes part in a wreath laying ceremony at the Tomb of Unknown Soldier outside of Kremlin wall in Moscow, Russia, on Aug. 26, 2015. (AP Photo/Ivan Sekretarev)
Africa

CAIRO—Authorities in Egypt are pulling out all the stops to ensure that President Abdel-Fattah el-Sissi’s visit to New York for the U.N. General Assembly is a diplomatic success despite growing criticism of the country’s human rights record under his rule.

El-Sissi flew to New York on Sunday to attend the General Assembly along with some two dozen loyal lawmakers and media figures who will seek to improve the country’s image during the four-day visit.

Parliamentarian Nashwa el-Deeb told reporters she and others would be meeting with U.S. officials and congressmen to redress the “wrong perceptions and positions” about Egypt. Another lawmaker, Tareq Radwan, said they would support the president as a “symbol of Egypt.”

Some of the president’s previous visits in the West have been marred by protests or assaults on accompanying journalists by supporters of Mohammed Morsi, the Islamist president whose 2013 military ouster was led by el-Sissi.

Egypt’s Orthodox Coptic Church, a staunch ally of el-Sissi, has dispatched senior clerics to exhort followers there to rally in support of him upon his arrival later Sunday and at the U.N. headquarters when he addresses the General Assembly later this week.

“Let us welcome Egypt as represented by its loved president … before every nation, as a manifestation of appreciation, dignity and love,” Pope Tawadros II, the church’s spiritual leader, told Cairo’s Al-Masry Al-Youm daily.

Coptic leaders in the United States have distributed leaflets urging their community to rally in support of el-Sissi. They are lining up buses to ferry people from churches in New Jersey to New York City. Tawadros has dispatched one of his closest aides, Bishop Biemen, to the United States ahead of el-Sissi, also to persuade Copts there to show their support.

El-Sissi supporters in the Egyptian media have also sought to rally support. “The world listens to Egypt, on Tuesday,” the state-owned Al-Gomhuria declared on its front page Sunday.

On Saturday, a Cairo court upheld a decision to freeze the assets of five prominent human rights campaigners in what critics described as the latest blow to a once-vibrant activist community. The ruling is part of a case against rights groups and campaigners accused of illegally receiving funds and using them to harm national security. If convicted, the five could face up to 25 years in prison.

“If they are trying to deter us from working in the future, then they are simply delusionary,” Hossam Bahgat, an investigative journalist and one of the five, wrote on Facebook following the verdict. “For sure, fellow workers in the human rights movement will not, after 30 years of struggle, retire during the worst time for human rights in the nation’s history.”

The Egyptian media, which is largely dominated by el-Sissi supporters, frequently airs conspiracy theories in which foreign nations plot to weaken Egypt by sowing political unrest. Such media portray el-Sissi and the military as a bulwark against chaos and human rights activists as traitors or foreign agents.

The flagship state-owned newspaper Al-Ahram on Sunday cited “informed sources” as saying unidentified powers were plotting to besiege and isolate Egypt in collusion with the now-banned Muslim Brotherhood, the Islamist group from which Morsi hails.