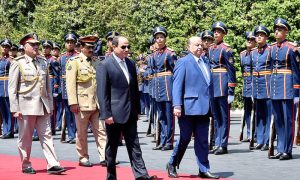 Egypt Court Sentences 75 to Death by Hanging Over 2013 Protest

An Egyptian court has sentenced 75 people to death, including top leaders of the outlawed Muslim Brotherhood group, for their involvement in a 2013 sit-in protest.

In a case involving 739 defendants facing charges ranging from murder to damaging property, the court also sentenced to life in prison the head of the Brotherhood, Mohammed Badie, and 46 others on Sept. 8.

Sources told Reuters that the 75 people sentenced to death will be hung.

The sit-in was staged by supporters of Mohamed Morsi, a Brotherhood stalwart who became Egypt’s president in 2012 but was ousted a year later by the military, then led by President Abdel-Fattah el-Sisi.

At least 600 people were killed when security forces broke up the protest in August 2013.

The Muslim Brotherhood was designated by Egyptian authorities as a terrorist organization as of December 2013, reported Egypt Today. That designation has also been considered by the U.S. Congress.

An investigation into the protest concluded in September 2015 by the government said that Brotherhood leaders were responsible for the violence that left hundreds dead.

Read More
Man Held After Backpack Fire Near US Embassy in Cairo: Statement

Authorities blamed the group for the deaths, claiming there was a number of violent incidents started by the Brotherhood leading up to the protest.

A witness told the Independent that the violence during what is now known as the Rabaa massacre was intense. “The violence was on a whole new level—like nothing I had ever seen before,” said Ibrahim Halawa, an Irish national who was just 17 when the Rabaa massacre happened. “I have never seen so much killing in my life.”

Human rights groups have criticized the trial as well as the security response back in 2013, blaming the government for the killings.

“These sentences were handed down in a disgraceful mass trial of more than 700 people, and we condemn today’s verdict in the strongest terms. The death penalty should never be an option under any circumstances. The fact that not a single police officer has been brought to account for the killing of at least 900 people in the Rabaa and Nahda protests shows what a mockery of justice this trial was,” said Najia Bounaim, North Africa Campaigns Director at Amnesty International, in a statement.

“The Egyptian authorities should be ashamed. We demand a retrial in an impartial court and in full respect of the right to a fair trial for all defendants, without recourse to the death penalty.”

Human Rights Watch also criticized Egyptian authorities for failing to bring charges against any security forces involved in the response to the protest, noting that Egypt recently issued a law to immunize senior military officers from being questioned for potential violations following Morsi’s ouster.