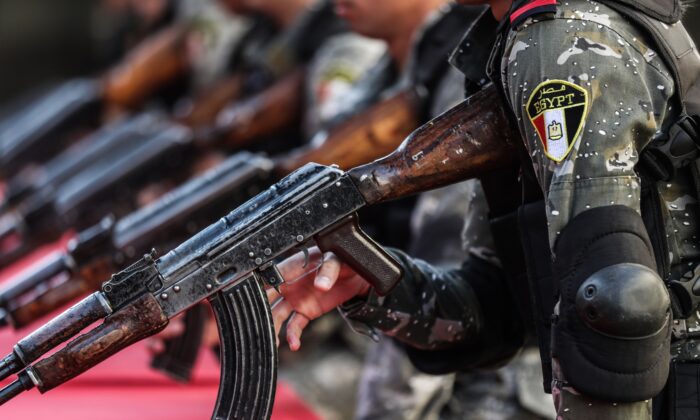 Egyptian armed forces are building a new 1.2-mile-long wall on the border with the Gaza Strip, according to a report by Al Monitor.

The construction of the border, which began on Jan. 27 but reportedly wasn’t announced by armed forces, forms part of a plan to boost border security and prevent extremists from entering the Sinai Peninsula from the Gaza Strip. It is also aimed at shutting down any remaining Palestinian cross-border tunnels.

Upon completion, the new border, made of reinforced concrete, will stretch from the Kerem Shalom crossing to the Rafah border crossing. It will be around 20 feet high and extend 16.4 feet underground.

The border will also consist of a second barrier running parallel to the old rock barrier built in 2008 on the border with the Gaza Strip, separated by a distance of no more than 10 meters.

According to the outlet, the barrier is set to be completed by mid-2020.

News of the new wall comes after the Egyptian military announced on Feb. 3 that it had found “south of the Rafah security camps’ yard a nearly 3-kilometer-long [1.86-mile-long] tunnel coming from the Gaza Strip to the heart of [the Egyptian border city of] Rafah.”

Egyptian security sources reportedly said the tunnel was an underground conduit for the infiltration of terrorists from the Gaza Strip, planting roadside bombs on the Egyptian side, pushing supporters of the ISIS terrorist group to Sinai, and for transferring weapons and explosives. “Ammunition and explosives were seized in the tunnel,” they said.

Hours earlier on the same day, five Egyptian soldiers were killed and others left wounded by a roadside bomb south of the town of Sheikh Zuweid, which borders the Gaza Strip.

Egypt has struggled to combat an ISIS-led insurgency in the northern Sinai since 2014, and subsequently began constructing a 8.7-mile-long, 1,640-foot-deep buffer zone in October of the same year to prevent terrorists from using underground tunnels.

The same buffer zone was expanded to almost a mile deep into the Egyptian side in October 2017, reportedly resulting in thousands of residents in the city of Rafah—which in 2014 had a population of 152,950 people—evacuating their homes.

The construction of the latest border comes after U.S. President Donald Trump on Jan. 28 announced the details of his long-awaited Middle East peace plan aimed to resolve the decades-long Israeli–Palestinian conflict.

“Jerusalem will stay united and remain the capital of Israel, while the capital of the State of Palestine will be Al-Quds (the Arabic name for Jerusalem) and include areas of East Jerusalem,” the plan states.

“This map will more than double the Palestinian territory and provide a Palestinian capital in eastern Jerusalem, where America will proudly open an embassy,” Trump said.

The president added that the 80-page plan represented his “vision for peace, prosperity, and a brighter future for Israelis and Palestinians,” and is “fundamentally different from past proposals.”