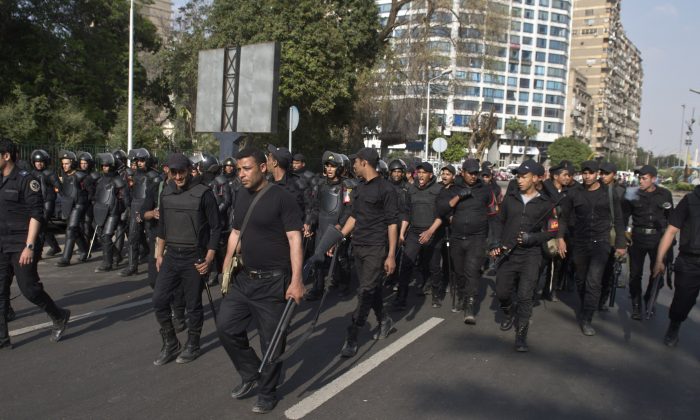 Egyptian riot policemen march forward along a street leading to the Cairo University on March 19, 2014, as clashes broke out during a protest by Muslim Brotherhood students, supporters of ousted president Mohamed Morsi. (Khaled Desouki/AFP/Getty Images)
Africa

CAIRO—Egyptians are bracing for potential violence ahead of a planned major protest Friday by Islamists calling for the toppling of the government and the defense of their religion, with security forces vowing to confront any unrest with “lethal force.”

The Islamists’ call for nationwide rallies Friday is the first attempt in months to hold large protests in the face of an overwhelming crackdown since the military’s ouster last year of Islamist President Mohammed Morsi.

The call also takes a starkly different tone. While past demonstrations by Morsi supporters have played down their Islamist nature, trying to rally broader support, the ultraconservative Salafis organizing Friday’s rallies have cast them in stark religious terms. They warn of a war against Islam and have urged protesters to raise Qurans in the air.

Security forces deployed in Cairo’s central Tahrir Square and in other key spots around the country Thursday evening. Many Egyptians say they are canceling social gatherings, avoiding public transportation and remaining home Friday.

Churches in southern provinces, where both Christians and hard-line Islamists have large concentrations, canceled Friday services and Sunday religious classes.

The fears have been further stoked by a campaign on pro-government media, playing patriotic songs and showing army special forces deploying. One TV presenter, Ahmed Mousa, urged the government to crush any sign of unrest.

“If it is a million armed persons, kill them all,” he said. “I don’t want you to arrest … just kill the armed people.”

Since Morsi’s ouster, the crackdown has killed hundreds and put more than 20,000 in prison. A new law effectively banning protests has also silenced non-Islamist critics. In the media, Islamists are depicted as fomenters of violence or linked to a militant insurgency.

With anti-Islamist feeling high, some Cairo residents vowed to help police against protesters, raising the potential for further violence.

“People will eat them up. We are all opening our shops and coming. I have a gun and I will bring it with me,” said Eid Said, a shopowner in the capital’s middle-class Dokki district.

Nearby, Maher al-Halawani, who runs an electronics shop, said he is keeping his family at home not out of fear but “to leave the streets empty” so police can easily put down Islamists.

The protest call comes from the Salafi Front, a faction in the Salafi movement concentrated in parts of the Nile Delta. Morsi’s Muslim Brotherhood supported the demonstrations. On its Facebook page, the Salafi Front calls for a “Muslim Youth Uprising” to “topple military rule in Egypt,” urging followers to “protect your Quran.”

“There is a war on my religion and my Islam,” says one young man in a video on the group’s page, wearing a black shirt reading, “The Battle for Identity.”