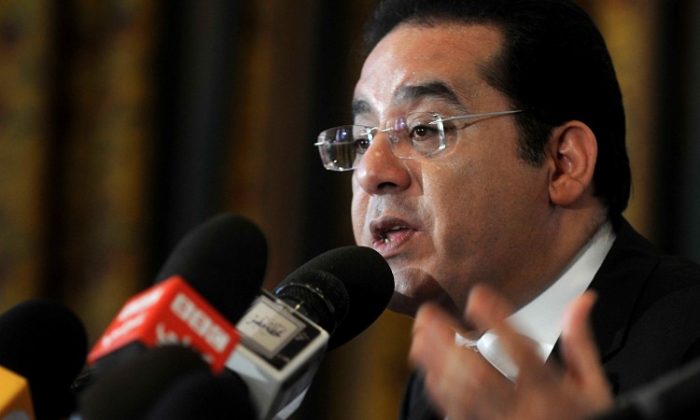 Egyptian presidential candidate Ayman Nour speaks during an election debate in Cairo on June 2, 2011. Nour alongside nine other candidates were banned on April 15 from taking part in the upcoming presidential elections. (Mohammed Khalil/AFP/Getty Images)
Middle East

Suleiman was briefly appointed vice president by the then embattled President Hosni Mubarak shortly before the regime collapsed. The BBC reported that he was banned for failing to get enough signatures for his nomination papers.

Al-Shater was deputy chairman under Mubarak and was jailed on terrorism charges and money laundering and was released from prison in March of last year. Egyptian elections commission spokesperson, Tarek Abul Atta, told AFP that candidates have to wait six years after a prison term to take part in elections.

“We will not give up our right to enter the presidential race,” Murad Muhammed Ali, a spokesman for Shater’s campaign, told the BBC. “There is an attempt by the old Mubarak regime to hijack the last stage of this transitional period and reproduce the old system of governance.”

The decision to ban the candidates came after military ruler Field Marshal Hussein Tantawi met with the heads of 17 political parties in the country who are vying for the nation’s highest office when the country holds elections next month.

So far at least Abu-Ismail, Suleiman, El-Shater, and Nour have said they will appeal the decision, according to Egypt’s Ahram Online.

Egypt’s Supreme Council of the Armed Forces, or SCAF, took power after Mubarak stepped down in February 2011, after mass protests. His resignation was one of the watershed moments in the Arab Spring protest movement.