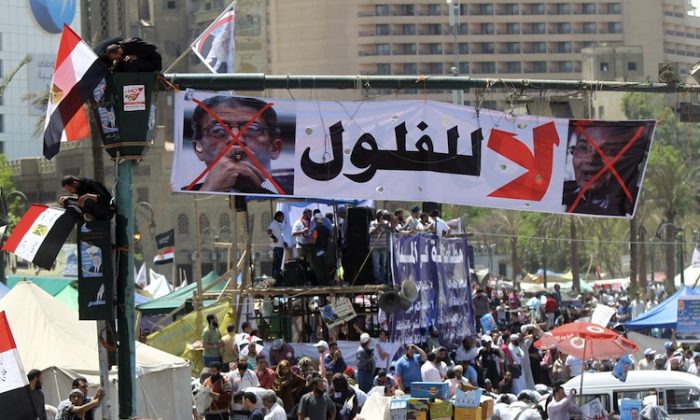 Egyptians sit on the traffic light decorated with a banner showing the portraits of former prime minister Ahmed Shafiq (R) and former Arab League general secretary Amr Mussa and which reads in Arabic 'no for the reminisce of the old regime', as thousands gather during a rally in Cairo's Tahrir Square on April 20. (Khaled Desouki/AFP/Getty Images)
Middle East

Egyptian former Prime Minister Ahmed Shafiq was barred from the country’s upcoming presidential elections, making him the latest candidate to be axed from participating, it was reported.

He was banned from taking part in the elections because he was a member of longtime former President Hosni Mubarak’s government, which was ousted last year following mass protests and a subsequent military takeover.

The Al-Ahram daily reported Shafiq was disqualified because of a recently passed law which states that officials who served in the Mubarak’s government in the past 10 years cannot run for the nation’s highest office.

The law was pushed by the ruling Supreme Council of the Armed Forces and sent to parliament, the newspaper reported. Known as the Disenfranchisement Law, it was apparently passed and was published in the state-run Al-Gareeda Al-Rasmeya publication.

Shafiq’s campaign called the law “a shame and a constitutional sin,” according to the BBC.

The move comes just a few days before the country announces the final list of people who can take part in the elections.