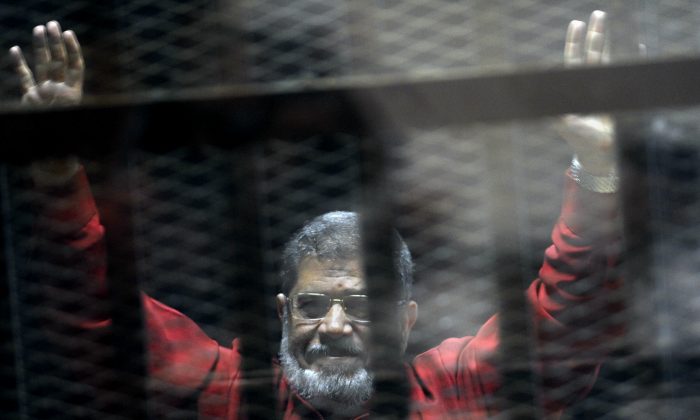 Former Egyptian President Mohammed Morsi, wearing a red jumpsuit that designates he has been sentenced to death, raises his hands inside a defendants cage in a makeshift courtroom at the national police academy, in an eastern suburb of Cairo, Egypt, on June 21, 2015. (AP Photo/Ahmed Omar, File)
International

CAIRO—Egyptian authorities have arrested nine leaders of the outlawed Muslim Brotherhood group pending investigation into charges of belonging to a terrorist organization and plotting to overthrow the government.

The Supreme State Security Prosecution said Tuesday that those detained include Abdul-Rahman el-Morsi, a Brotherhood leader and member of the group’s Guidance Office.

The Muslim Brotherhood won a series of democratic elections after Egypt’s 2011 uprising. Mohammed Morsi, a senior member of the group, was elected president in 2012 but was overthrown by the military after a divisive year in power.

Since then, the government has carried out a widespread crackdown on the Brotherhood and other opponents, jailing thousands.