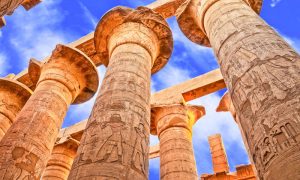 The Loss and Looting of Egyptian Antiquities
0 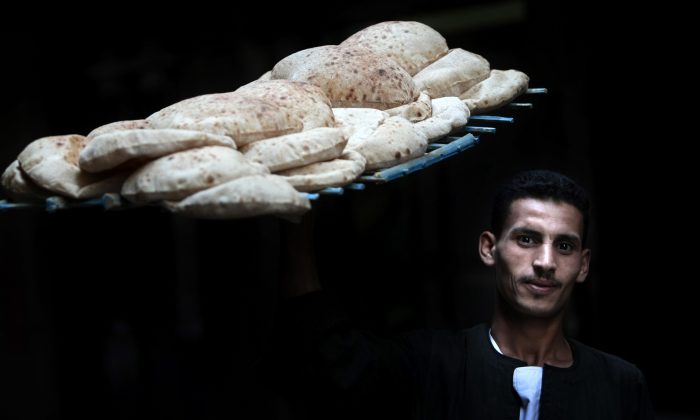 An Egyptian worker carries bread in a bakery in Cairo on October 22, 2011. (Mahmud Hams/AFP/Getty Images)
Opinion

Egypt and Subsidies: A Country Living Beyond Its Means

Since Egypt’s 2011 revolution, the country’s economy has been suffering, with almost all economic indicators pointing to a deteriorating situation—and this despite the unprecedented support of some of the Arab Gulf countries. Subsidies, which have always represented the social contract between the governing regime and the population, are a major problem. Though reforming subsidies has consistently been a concern, no regime over the last 60 years has been able to implement serious measures. Rather, a piecemeal approach has been used when adjustments to the subsidies system became urgent. As long as the system could be sustained, even with an extremely high economic cost full of inefficiencies and wasted resources, profound reform did not take place. But with Egypt in such dire economic straits, the government is starting to pay more attention to subsidy reform, particularly in regard to energy and food subsidies.

Subsidies and the Economy

Inefficient subsidy systems, along with unemployment, comprise the two major structural economic problems facing Egypt. The economic cost of subsidies in a country experiencing a huge loss of reserves, a severe scarcity of foreign currency (albeit mitigated by Gulf aid), an alarming budget deficit (almost 14 percent of GDP, as energy and food subsidies’ share of GDP has reached almost 10 percent), and an exploding public debt (exceeding 100 percent of GDP) demonstrates that the system cannot be sustained. The costs have reached alarming figures. Energy subsidies comprised 72 percent of the total subsidy allocation in the 2011-2012 government budget, whereas food subsidies accounted for 14 percent. Fuel subsidies alone represented more than 70 percent of the budget deficit in 2011-2012.

Thus, while subsidies were originally considered a tool to correct for market failure and to alleviate poverty, they have become a source of macroeconomic failure and have contributed to Egypt’s distressed economic situation.

The need for energy subsidy reform is one of the few topics in Egypt that economists on both ends of the political spectrum can agree upon, especially given that domestic consumption has outpaced oil production and that prospects of new discoveries remain limited. Those on the left and the right also generally agree on how to reform the system. International organizations such as the World Bank and the IMF have already provided the major features of the recipe for this reform, and almost all of Egypt’s recent governments have been convinced of its necessity.

Proposed remedies include replacing the current in kind subsidy system with cash subsidies for food and energy; raising the price of energy for the energy-intensive industries that benefit more from the system; and rationing the usage of gasoline, natural gas, and diesel.

The government is beginning to take some action. It increased the price of natural gas for heavy industries, including steel and cement, in early 2014. In April, it raised the price for home and small business use of natural gas, in some cases quadrupling it. State media has claimed that revenues from this increase will reach 800 million to 1 billion Egyptian pounds.[1] However, the price hike only applies to a small percentage of Egyptians connected to the gas grid, as most citizens use cylinders of butane for cooking. It therefore appears that the government is following the international organizations’ major guidelines for energy subsidy reform, though the slower pace and smaller magnitude of the reform may differ from the original recipe.

Food subsidy reform, albeit necessary, is less pressing due to the relatively smaller burden food subsidies impose on the government budget. In March, the government implemented a pilot program in Port Said in which consumers were given “smart cards” to purchase inexpensive baladi (peasant) bread. While Egypt’s famous baladi bread subsidies are thus not being eliminated, they are being rationed to benefit consumers rather than producers. Smuggling and black market activities have also been common under the baladi bread subsidy arrangement. The new system aims to reduce waste and ensure that those who really need price breaks on bread—the poor—receive them. Reducing waste and eliminating the black market are initial steps, but generalizing the Port Said pilot program represents a major challenge that is yet to be met.

There are several issues standing in the way of profound subsidy reform.

Inability to target the poor: Forty-five percent of the Egyptian population is below the poverty level of earning $2 per day. A huge number of these people are unregistered. Moreover, the proliferation of the informal sector has made it difficult to pinpoint who is poor and who is not. Hence the government’s ability to identify and target the needy is compromised.

Inflation: The weight of food products in the Consumer Price Index is almost 40 percent, and as a result any increase in food prices has a major effect on the inflation rate. Any growth in energy prices is also likely to have an impact on inflation, which in turn can increase the poverty rate, which is already soaring. The percentage of the population living below $1.25[2] per day has increased from 20 percent in 2010 to more than 26 percent in 2014. This has had serious consequences on the political and social stability of the country, which cannot tolerate any more setbacks.

Political economy: Given the expected rise in inflation from increased prices, goods producers will likely pressure and threaten (explicitly and implicitly) the government. The probability of collusion among these producers is likely, as the majority of Egyptian industries are highly concentrated in certain sectors, such as steel, cement, and food processing. This pressure on the government has always made it reluctant to take the necessary step of fundamental change.

Subsidies are intended to attain specific social and economic objectives by correcting market failures and helping the poor to gain better living standards, but they have failed in this mission and have become counterproductive. Moreover, subsidies have dragged Egypt into a situation in which it is living beyond its means. The situation has become unsustainable.

Phasing out and/or rationing subsidies will have a huge impact on the structure of the Egyptian economy, with significant welfare and income distribution effects that cannot be easily contained politically or socially. Yet delaying the removal of subsidies in such a dire economic situation will further exacerbate economic problems, which also cannot be contained politically or socially.

“Big bang” reform is unlikely to happen, as the solution lies in a gradual, crawling type of change in which the introduction of successive piecemeal reforms that are clearly communicated to the public should take place with a timetable and incentives that allow people to adjust along the way. While piecemeal reforms such as the natural gas price hike and the baladi bread smart cards should not be the final answer to addressing subsidies, they are a first step and can allow the government and the people at this difficult time to follow a clear plan over a number of years that will avoid negative repercussions on the economy and society.

Ahmed Farouk Ghoneim is a professor of economics in the faculty of economics and political science at Cairo University. He is a research fellow at the Economic Research Forum for Arab Countries (ERF) in Egypt, where his research focuses on Iran and Turkey, and is also a research fellow at the Center for Social and Economic Research (CASE) in Poland. This article was originally published at the Middle East Institute.