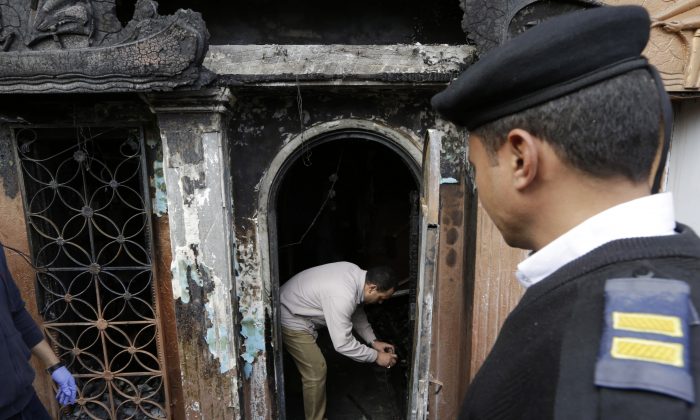 An Egyptian forensic member checks the gate of the nightclub which was attacked in Cairo, Egypt, Friday, Dec. 4, 2015. (AP Photo/Amr Nabil)
Africa

Police were looking for two young men who carried out the attack in the Agouza district because they were previously not allowed to enter, state news agency MENA reported.

The attack happened at the El Sayad restaurant, which is not officially a nightclub but is among Egypt’s small local eateries that skirt taboos around drinking in this predominantly Muslim country by serving food and alcohol throughout the day, then turning into a bar until the early morning hours.

While alcohol is legal in Egypt, most restaurants and clubs don’t have liquor licenses.

The Ministry of Interior, in a statement posted on its Facebook page, cited an unnamed official with its Security Information Center who said a preliminary investigation showed the attack happened after a dispute between the nightclub staff and some other people, who then threw Molotov cocktails at the entrance.

Online video posted by newspaper Youm 7 showed thick black smoke pouring through the doorway of El Sayad as onlookers milled outside unable to help. Flames were burning the inside of the building and charring the facade of the restaurant, located on the ground floor of an apartment building.