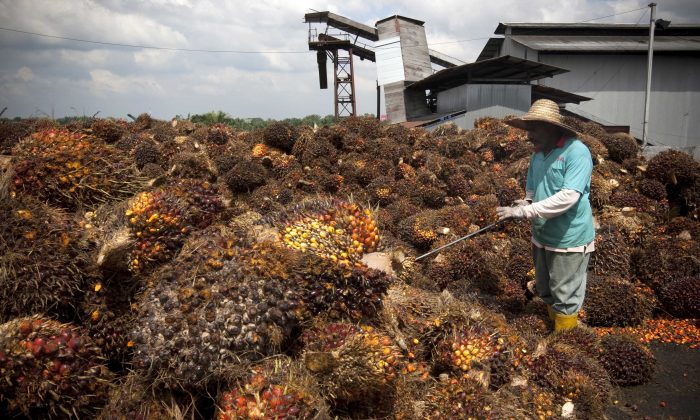 Palm oil is used to make many of the products we commonly use and consume: margarine, ice cream, lipstick, shampoo, washing detergent—just to name a few.

As a result, our high demand for palm oil production has led to widespread deforestation in Southeast Asia, as tropical forests are cleared to make way for palm oil plantations. In turn, many animals native to the region have lost their habitats and become endangered.

Between 2000 and 2010, the overall rate of deforestation in the tropics of Southeast Asia was 1 percent per year, with some areas, like the Indonesian island of Sumatra, losing nearly 5 percent during peak years.

In response to growing pressure from environmental groups and concerned scientists, some companies, like the food processing giant Cargill, have pledged to source and produce their palm oil sustainably.

Whether more firms will adopt similar conservation efforts will depend on the financial impact of switching.

New research shows the incentive may already be there.

A group of researchers from the University of Vermont, University of East Anglia (in the United Kingdom), and the Zoological Society of London found that companies can make good profits from charging consumers more for products made with sustainably sourced palm oil.

The researchers gained access to financial records from an unnamed palm oil company that operated in central Sumatra—analyzing how much it cost to conserve parts of its land, and what kind of impact those costs had on the land’s biodiversity and the company’s profits.

Then they calculated different price premiums that the company could charge for products made from conservation-grade palm oil.

In the experiment, published recently in the Proceedings of the National Academy of Sciences journal, supermarket shoppers in the United Kingdom were presented with two identical-looking tubs of margarine, one described as made from conservation grade palm oil, the other made from conventionally sourced palm oil. Margarine was chosen because it is a common household product that has palm oil as a major ingredient.

To test out how much more consumers were willing to pay for sustainably made margarine, shoppers were presented with differently priced margarine.

The scientists found that shoppers were willing to pay 15 to 56 percent more for conservation-grade margarine, compared to conventionally priced margarine. Consumers were most willing to shell out money when they received more information about conservation efforts (the high-information group).

The researchers crunched the numbers and found that a plantation of the unnamed company’s size (32,000 hectares) could profit from a 15 percent premium while conserving as much as 6,000 hectares of land.

But the Union of Concerned Scientists believes the guidelines are too loose, and cannot guarantee that the palm oil was sourced without destroying forests.

Larger companies with high-productivity land will likely have the biggest financial incentive to begin doing conservation on their land, while smaller companies can enter into cooperative agreements to try the same thing, the scientists concluded.

In all, they assessed that doing good for the environment can pay off.