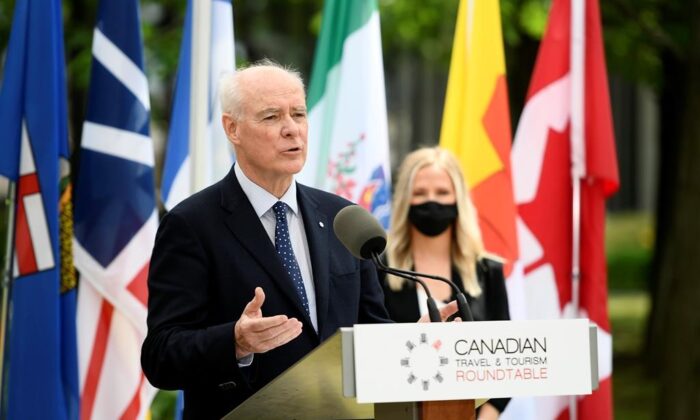 Perrin Beatty, president and CEO of the Canadian Chamber of Commerce and former defence minister, speaks during a news conference held by the Canadian Travel and Tourism Roundtable at the Ottawa Airport, in Ottawa on June 14, 2021. (Justin Tang/The Canadian Press)
Canada

The creator of the Emergencies Act would not say if its Feb. 14 invocation by the Liberal government was justified to deal with the Freedom Convoy protests and blockades, but he said it is such a “blunt” tool that efforts should be made to avoid using it in similar circumstances in the future.

Perrin Beatty, who created the Act that was adopted in 1988 while serving as defence minister under Brian Mulroney, testified before the Special Joint Committee on the Declaration of Emergency on March 29.

Beatty focused his interventions on the intention that guided the creation of the act as he addressed the committee formed of MPs and senators.

He explained that the previous War Measures Act, invoked during the two World Wars and the 1970 FLQ crisis, was drastic, could not be challenged in court, and did not protect civil liberties.

He said the Emergencies Act of 1988 replaced it to better protect civil liberties, including those enshrined in the charter of 1982, and to provide parliamentary oversight.

Beatty did not say if he believed invoking the act was justified, citing having not seen sufficient evidence, but said that even if it’s determined it was, parliamentarians should not be satisfied.

“Even if you find that invoking the act was warranted, you should work to make it unnecessary if we face similar circumstances again,” he said.

“Now that it’s been used, it becomes easier to invoke. You must not define down the threshold at which extraordinary powers are used to curtail civil liberties.”

Beatty said if the act was useful to compel towing companies to remove trucks in Ottawa, then provisions of the sort should be added to Ontario’s emergency powers.

If the act allowed the swearing-in of a large number of police officers to clear the Ottawa protest, then current legislation should be amended to facilitate such a measure, without having to resort to declaring a national emergency, he said.

Different police agencies have testified before House of Commons committees in recent weeks that the act gave them additional tools that made them more effective.

Beatty warned against taking the usefulness of the act as a mark of success.

“The act clearly made the work of the authorities easier. The issue, however, is not whether it helped the police, but whether the powers they already had could have resolved the problem. The concern is necessity, not efficiency,” he said.

Careful not to delve into politics, and making calls to keep the review process free of partisanship, Beatty did raise the hypothesis of invoking the act having a political effect.

“Invoking the act set a clear message that our political leaders expected the police to do their jobs. But does that make the invocation primarily political, instead of to provide law enforcement with essential powers that they previously lacked? Would that meet the criteria for invoking the act?”

Beatty encouraged the committee to study the evidence used to justify invoking the act, including the Ontario Provincial Police assessment that deemed the movement a threat to national security around Feb. 7.

“I hope you’ll insist on seeing that assessment, and will evaluate the quality of the intelligence on which it was based,” he said.

The former defence minister, who is now the CEO of the Canadian Chamber of Commerce, also said the committee should look not only at the invocation of the act, but also at the circumstances that led to it.

“Leaders of all political backgrounds need to ask how we got to this point. The police were called upon to deal with a breakdown in our political system,” he said. “If we’re to avoid much more serious emergencies in the future, we must restore a civility to our politics that allows us once again to disagree strongly on issues without seeing one another as enemies.”

At the end of the meeting, Conservative Sen. Claude Carignan thanked Beatty for sharing “all his wisdom.” “Clearly we’re missing him, because I’m sure if he were here, we wouldn’t have had the Emergencies Act declared,” he said.

The government invoked the Emergencies Act for the first time on Feb. 14 to deal with cross-country protests and blockades demanding the lifting of COVID-19 restrictions.

It was eventually only applied to clear the site of the Ottawa protest on the weekend of Feb. 18 and was revoked on Feb. 23. Unprecedented measures such as the freezing of protesters’ financial accounts without a court order were applied, as well as suspending the right of peaceful assembly in a designated area.