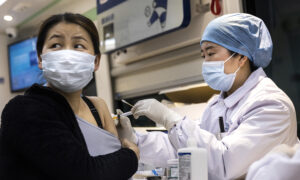 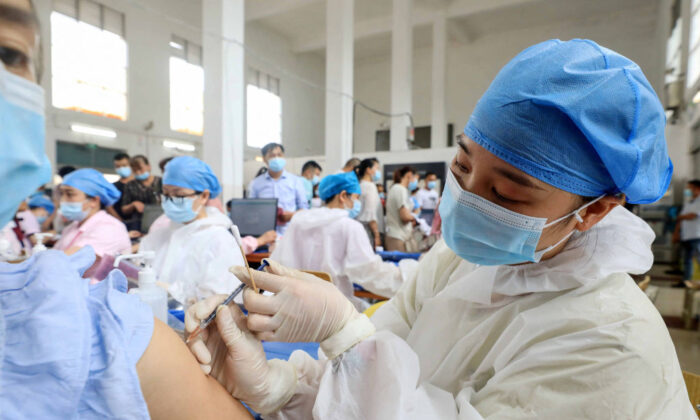 A health worker administers the Sinovac COVID-19 vaccine to a resident in Rongan, in China's southern Guangxi region on June 3, 2021. (STR/AFP via Getty Images)
Vaccines & Safety

More than 700 million vaccine doses have been administered in China; but so far, the Chinese regime has not announced any vaccine-related deaths, although 80 deaths occurred after vaccination in Hong Kong where the same Chinese vaccine was shipped.

In the meantime, the Hong Kong government just announced that it would no longer count post-vaccination deaths that do not have a strong correlation to COVID-19 vaccines. And this has raised a lot of eyebrows. A virology expert said that a phase 3 clinical trial of the Chinese vaccines has two major problems.

However, with such a large number of vaccinations, the first official report on adverse reactions to vaccination was only released by the Chinese CDC on May 28.

The report said that by the end of April, 265 million doses of Chinese vaccines had been administered, with 31,434 adverse reactions. Among them, only 188 were deemed serious.

However, the report did not mention the specific symptoms and did not include any instances of death.

Although the Chinese Communist Party (CCP) has not announced any deaths after vaccination, news of serious abnormal reactions among mainlanders continues to spread, and one recipient reportedly died very quickly after receiving the vaccine.

A staff member of China’s CDC system, surnamed Lan, told Radio Free China that a resident at Ningjing county in Hebei Province died only 5 minutes after receiving the Chinese vaccine on May 31. Two other residents showed very serious reactions and had to be sent to the ICU ward of No. 3 Hospital in Shijiazhuang city on the same day.

Lan said that there was another serious incident that happened on June 1 at the vaccination site at the Sports Center of Hebei Province.

According to an April report obtained by The Epoch Times from the Hebei CDC’s Immunization Planning Institute, a total of 11,900,189 doses of the COVID-19 vaccine were administered from Dec. 2 last year to April 30 this year, with 1,542 cases of AEFI (adverse events following immunization) reported, of which nine people died.

Currently, the WHO has approved the emergency use of two Chinese vaccines: CoronaVac made by Sinovac, and BIBP made by Sinopharm/China National Pharmaceutical Group.

However, Lan revealed that the data provided by the CCP to the WHO was allegedly falsified, and that the rate of adverse reactions to vaccines in China was much higher than the data released by the CDC on May 28.

Problems With the Phase 3 Clinical Trial of Sinopharm Vaccine

In an interview with the Chinese language Epoch Times, Dr. Dong Yuhong, a European expert on virology and infectious diseases and a chief scientist at a biotechnology company, pointed out that that there are two major problems with the report.

First, in a phase 3 clinical trial, the most important thing is to observe the protective power of the vaccine for the elderly, yet only 5 percent of the participants were elderly people in the trial conducted in Brazil, and less than 2 percent in the trial in the Middle East.

Second, when the vaccine enters the body, the general side effects (such as fever and fatigue) caused by the immune response should be higher than those of a control (comparison) group.

Dong said it is puzzling that the proportion of side effects in the Sinopharm vaccine group is equal to or even lower than that of the control group.”Has the Sinopharm vaccine really induced an immune response? Are there really enough antibodies produced in the recipients’ bodies?” Dong said.

According to The Wall Street Journal, data from Serbia, where the Sinopharm vaccine was administered, showed that as many as 29 percent of the 150 participants with an average age of over 65 had no demonstrable antibodies three months after receiving the second dose. Local academics questioned the adequacy of the Sinopharm vaccine to protect the elderly.

The East African island nation of Seychelles and the Middle Eastern island nation of Bahrain both experienced a significant increase in infections despite high levels of inoculation with the Sinopharm vaccine.

Vaccination in Guangzhou and Shenzhen Halted

According to the government of Guangdong Province in China, at present, in Guangzhou, Shenzhen, and other cities the vaccination coverage rate among the 18- to 59-year-old target population is more than 70 percent.

But recently, there have been serious surges of the mutated strain of the CCP virus cases in Guangzhou and Shenzhen, as well as the surrounding Foshan, Maoming, Southwest Guangxi, Nanning, and other cities.

Lei Chunliang, the director of the No. 8 Hospital Affiliated with Guangzhou Medical University, revealed that as of June 1, the hospital had admitted more than 50 local patients with COVID-19, and four of the newly infected had already received the first dose of vaccine.

While the new cases were surging, and when it was a good time for the vaccine to play its role, Longhua district in Shenzhen city suddenly announced on June 6 that vaccinations would be suspended. The authorities didn’t explain why.

On May 31, Guangzhou city also announced that the vaccinations would be halted. Vice mayor Li Ming said there were two reasons for this decision. First, the city needed to focus on the testing; second, the city needed to prevent crowds from gathering to reduce the risk of cross-infection.

However, footage from Guangzhou shows tens of thousands of people were gathering without sufficient social distancing as they lined up for the testing.

While the suspension of vaccination has caused doubts as to the effectiveness of Chinese vaccines, Gao Fu, the director of China CDC, said at the 7th Annual Academic Conference of the Chinese Academy of Sciences that human beings need to learn to “live in peace with the virus and slowly get used to such a life” as the COVID-19 pandemic is becoming more and more like influenza.

“After we all get used to the flu, and flu happens every year, and that’s called a normal life,” Gao said.

He then stressed that after herd immunity was established because of the vaccinations, the focus on dealing with  COVID-19 would no longer be how to prevent infection, but how to prevent deaths and serious symptoms and reduce the burden that the disease causes.

Because of the lack of transparency in the data, there is no way to know whether the Chinese vaccines can really prevent serious symptoms and deaths in China.

However, the number of deaths in Latin America, which heavily relies on the Chinese vaccine, has exceeded one million.

According to the Pan American Health Organization (PAHO), countries including Chile, El Salvador, Brazil, and Uruguay rely almost entirely on Chinese vaccines. As of May 14, 65 percent of vaccines administered in 26 Latin American countries came from China.

Among these countries, Brazil has the second-highest COVID-19 death toll in the world, with nearly 480,000 deaths as of June 9. Brazil’s Minister of Economy Paulo Guedes said at a meeting of the Brazilian Health Council on April 27, “The Chinese invented the virus and its vaccine is less effective than the American vaccine.”

Former U.S. Secretary of State Mike Pompeo said in a May 30 interview with Zooming in China, “When they (China) deliver PPE across the world that doesn’t work. They now have a vaccine that they’re attempting to ship all across the world. I’ll leave to professionals to determine how effective that  is.”

Pompeo said he wants all vaccines to be effective, but finds it very hard to trust the CCP and prefers to use Western vaccines to protect his family.

As of June 9, more than 3.75 million people have died from COVID-19 and over 174 million have been diagnosed with the disease worldwide, according to tracking data on the Johns Hopkins University website.

With the endorsement of the World Health Organization (WHO), the CCP has embarked on vaccine diplomacy amidst a chorus of skepticism from the international community.

Li Xingqian, the head of the foreign trade department of China’s Ministry of Commerce said in a June 7 interview with the CCP mouthpiece CCTV that China has exported vaccines to more than 40 countries and has been encouraging four vaccine manufacturers to actively expand exports.

On May 11, Liu Peicheng, the press spokesman of Sinavac’s parent company Sinovac Biotech, revealed that according to incomplete statistics, the cumulative global supply of Sinavac vaccine is at 380 million doses.

According to the estimates by several securities companies in China, Sinovac Biotech’s net profit in the first quarter of 2021 could be as high as $1.57 billion, based on a net profit of about $7.83 per dose.

On June 1, the Hong Kong government announced that they would only count deaths that are “potentially” related to vaccination.

Dr. Ma Chung Yee, president of the Hong Kong Public Medical Doctors Association, said, “People die every day whether they get vaccinated or not, and there is no reason why there is not a single death case [in China] after hundreds of millions of people have been vaccinated.”

She said that if the Hong Kong government followed the CCP’s approach, from now on there wouldn’t be any death cases being reported in Hong Kong as well, and this proves once again Hong Kong has become “one country, one system” with China.

According to the Hong Kong Hospital Authority, from May 24 to May 30, 12 more deaths and 4 miscarriages after vaccination occurred in Hong Kong.

People of Hong Kong have been questioning the government’s reporting decision.

When responding to the policy change on June 2, Chief Executive Carrie Lam said, “Whenever it is announced that a person has passed away, and that person has received the vaccine a while ago, it gives a wrong impression [about the vaccination].  This may affect the public’s confidence [in the vaccine].”

She said the policy change was to avoid “unnecessary misunderstandings” caused by “the release of information, or some kind of expressions or reports.”

In Hong Kong, only about 21 percent of people have been vaccinated since the large-scale vaccinations started on February 26 this year.

An official warned on May 25 that Hong Kong may soon have to throw away millions of vials of vaccine as they are about to expire because not enough people are registered to receive them.

The Hong Kong government responded on the same day that, as of May 24, 840,000 doses of vaccine in Hong Kong will expire in mid-August, and if they are not used up by then, they may be donated to other places.