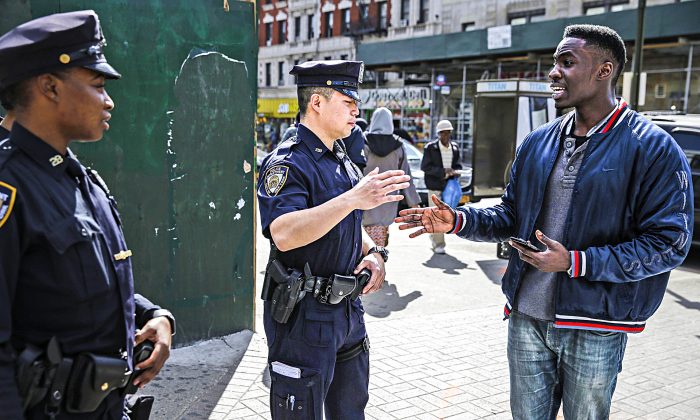 Effective Policing Comes at a Price

Community policing has the potential to transform communities, but what does it need to succeed?
By Petr Svab

NEW YORK—“It’s a ray of hope,” said Abena Smith, as she greeted police officers by name and filled their plates with turkey, cake, and other goodies at a police precinct community meeting in Harlem in November.

Smith was talking about the rebirth of the community policing philosophy that encourages New York Police Department officers to get to know the people on their beat. Smith, a lifelong Harlemite, welcomes that. She even has some officers’ cellphone numbers and email addresses.

She’d still call 911 to report a crime in progress, “but if there’s something else that’s going on … where I need to speak to an officer that I can trust … whether it’s drug dealing, gambling, or something of that nature, I have access to that person,” she said.

Personal connections like this epitomize the NYPD’s hopes for its community policing strategy, which aims to restore relationships with locals and patch the gap in law enforcement left by dialing back the use of stop-and-frisk tactics.

The 32nd Precinct in central Harlem, where Smith serves as precinct community council president, became one of NYPD’s first testing grounds for the program in September 2015.

Many police departments around the country employ a similar community strategy, hoping to solve a pressing conundrum: how to keep crime down without alienating minority communities.

As deadly ambushes on police soar to numbers unseen for decades, some experts believe the push for reconciliation needs to come from both police and the communities that distrust them. Others believe it needs to be the police who take the initiative.

Yet somebody urgently needs to start bridging the divide; otherwise, ever harsher law enforcement and growing retaliation against police will spiral out of control, according to Global Impact Strategies, a predictive analysis company.

Community policing offers one of the most promising solutions, experts say. But to work, the strategy needs so much manpower, training, and commitment, it’s seldom attempted on a large scale.

Community policing developed out of a push for police reform during the crime surge of the 1970s and 1980s.

By that time, large police departments turned into bureaucracies, measuring their success by the speed of their response to 911 calls.

As crime rates went up, seemingly unaffected by police efforts, some cities started to experiment with new approaches to policing.

In 1983, the National Institute of Justice and the Harvard Kennedy School started regular meetings with police chiefs, mayors, scholars, and others to distill these new ideas into a strategy called “community policing.”

They concluded the following:

How to Make It Work

Community policing requires officers to talk to people, learn their problems, and figure out ways to fix them. That may vary dramatically from neighborhood to neighborhood. While Central Park South residents may complain about public urination, East New York residents may express more concern about gang violence and drug dealing.

Police can try to solve these issues with the usual methods of writing tickets, issuing summonses, and making stops and arrests. But they can also use softer methods, like getting drug addicts into treatment centers and the homeless into shelters, organizing midnight basketball games to keep youth out of trouble, or even helping an ex-convict get a job.

Their unique position of authority can make police very effective in connecting people with services.

“Law enforcement is a historically conservative entity that people are not used to saying no to,” said John Rosenthal, a real estate agent who co-founded a nonprofit that connects police departments with addiction treatment facilities.

The program gives drug addicts a chance to come to the police and be placed into treatment programs instead of getting arrested. More than 200 police departments across the nation participate. The program has significantly improved the reputation of police in their communities, Rosenthal said.

But the soft approach comes with a downside too, as it can force officers into the role of social workers, overtaking their responsibilities of fighting crime.

“Social services aspects that were kind of added on to community policing, some of that has to be done but can’t become a primary focus of all the police aspects in the neighborhood,” former New York City Mayor Rudy Giuliani told The New York Times shortly after taking office in 1994.

As part of the push to professionalize police since the early 20th century, officers were rotated through different areas. If officers stayed in one place, the fear was, local criminals could woo them into corruption.

Indeed, in the 1970s and 1980s, some NYPD officers developed relationships with drug dealers and ended up joining the trade.

Community policing, however, requires patrol officers to stay in one neighborhood and have broad discretion in using their authority—which opens the door to abusing that power.

Proponents of community policing say corruption can be mitigated by establishing strong values through training and leadership.

“Community policing is ultimately about values,” reads a 1994 statement by the U.S. Department of Justice. “Values must be ingrained in the very culture of the organization and must be reflected in its objectives, in its policies, and in the actions of its personnel.”

Community policing requires officers to be nothing short of extraordinary. On one hand, they still need to be tough enough to handle a shootout—a situation beyond the imagination of the inexperienced.

“That feeling is so immense that it almost turns off all thought processes in your brain,” said Texas police officer Ed Pietrowski, recalling the first shooting he was involved in as an NYPD rookie.

On the other hand, officers have to be empathetic enough to defuse conflicts and creative enough to figure out solutions to problems in the community.

If everybody puts their arrogance down and just becomes human, and each person cares about another person, you’ll have a change in the community.
— Eric Quarles, former Atlanta police officer

“You have to have the right kind of personality,” said Eric Quarles, a former Atlanta police officer who now drafts community relations policy at the Department of Homeland Security.

Rigorous screening and training helps, but inevitably, some officers will fall short of the standard over the long haul.

“There are some in the organization that shouldn’t be here,” Bratton said at an October 2014 NYPD conference. “The brutal, the corrupt, the racist, the incompetent.”

Yet, such calls clash with union job protections.

Patrick Lynch, president of the city’s police union, pushed back against Bratton’s comment. “Police officers are entitled, like anyone else, to due process,” Lynch said in a statement, suggesting police officers should enjoy job protections comparable to those of other workers.

But police union contracts require an “extremely burdensome administrative process for punishing/terminating officers, or requiring arbitration before they can be fired,” said Adam Bates, criminal justice policy analyst with the libertarian Cato Institute, in an email.

Private sector employees enjoy no such protections, unless they claim discrimination.

But it’s hard to argue for fewer union protections for police when other public servants, like teachers, enjoy similar protections, Manhattan Institute’s Heather Mac Donald said. “Which do we want? Due process or not?”

Coming at a Price

A serious community policing program needs more officers on the ground, or at least more money for overtime, than conventional policing.

Officers need to spend time talking to people in their neighborhoods to learn their problems and then a lot more time to create solutions, tailor enforcement, and coordinate with other city agencies or people in the community to put the solutions into practice.

“It’s really wonderful, but every time we do that, we’re taking our cop off something else,” said Nick Selby, a Dallas-area police detective and author on police–community relations.

Deputy Inspector Michael Baker, the commanding officer of the 32nd Precinct in central Harlem, spoke highly about community policing, though he also received more personnel to carry out the program.

He has directed almost $2 billion into new equipment, training, overtime pay, and facility upgrades for the NYPD since taking office in 2014. Every officer has received a smartphone. Dilapidated precinct offices are currently undergoing long overdue face-lifts and technology upgrades.

And the results are starting to show. Just recently, the Harlem officers received a 911 call about a shooting on 133rd Street. By the time they arrived, the shooter had fled. The local NCO called a couple of his contacts in the area and soon received online access to a security camera at a nearby business. He checked the footage on his smartphone and not only recognized the suspect, but also spotted where the shooter disposed of the gun.

That’s where community policing starts to make up for the decrease in stop-and-frisk policing. Officers don’t need to stop dozens of people at random; instead, they get to know the people who cause trouble in the neighborhood and focus on them.

A few conversations on the streets of Harlem revealed that distrustful attitudes toward police are thawing, with caution.

“You got some [officers] that are real [expletive], and then you got some that are real nice, they’ll listen to exactly what you have to say, not shut you down,” said Marcos Alvarado, local plastic bottle collector, acknowledging a little change in police attitude.

For Ronald Wilson, a former manager at the Metropolitan Transportation Authority, the NYPD still has a long way to go. “When you live in the suburbs, parents teach their kids that ‘Officer Joe is your friend,'” he said. “Here … Officer Joe’s not a bad guy, but he’s definitely not your friend.”

Police departments across the country are using community policing, but it’s hard to gauge how many are using it and to what extent. Most of the 18,000 police agencies in the nation are small town departments, with 10 or fewer officers, that only report some general statistics to the federal government on a voluntary basis. The U.S. Justice Department tracks some of the progress, showing initiatives are underway in major cities like Los Angeles, Chicago, and Washington.

Yet, since the strategy requires a high resource investment, departments tend to put in place only pieces of it, or roll it out gradually. NYPD runs its program in 44 of 76 precincts. It plans to extend the program to four more precincts in February, a spokesperson said via email.

Even if some departments across the country don’t want to make community policing an official strategy, officers should still try to work with their communities as best they can, ex-officer Quarles said.

It can feel awkward, he said, especially when trying to talk to people who may fear or loathe police. But he still feels officers should try to break the ice.

“It doesn’t have to be an in-depth conversation,” he said. It can be, “Hey, how you doing today? Did you see the game last night?”

“If everybody puts their arrogance down and just becomes human, and each person cares about another person, you’ll have a change in the community,” he said.