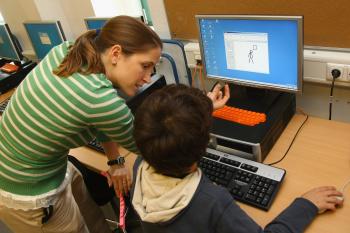 A Grade 4 child learns to use a computer program to draw. The Canadian Teachers' Federation believes that media and digital literacy are life skills that should be taught in schools along with traditional literacy and numeracy skills. (Sean Gallup/Getty Images)
US

“Those are all skills we need to be good citizens in today’s information age,” Ms. Wing said, noting that “media is the main way, particularly digital media, that we communicate now and access information and entertainment. It’s very important in everyone’s lives, particularly young people.”

A centre of expertise in media education, MNet is cosponsoring Media Literacy Week with the Canadian Teachers’ Federation (CTF).

“Media and digital literacy are life skills that should be included in the curriculum along with traditional literacy and numeracy skills,” CTF President Mary-Lou Donnelly said in a news release.

“Just because [youth] can pick up the technology very quickly does not mean they are savvy at all when it comes to understanding the Internet and Internet content,” said Ms. Wing.

“We think the main way to protect children is through giving them critical thinking skills, because [the Internet] is a global environment where they have easy access to material that may be inaccurate, sometimes illegal, or inappropriate.”

It’s especially important to monitor Internet use for kids up to 7 or 8 years old, but parents can explain to even very young children about certain types of personal information that should not be shared, and why people might want such information, she said.

Meanwhile, parents and teachers can go to sites with older children, help them understand the information, and teach them to read the sites’ privacy policies and terms and conditions.

Not Everyone's a Journalist

MNet and CTF joined with Encounters with Canada, a Historica-Dominion Institute program for teens, to launch Media Literacy Week on Monday with a panel discussion in Ottawa on the impact of digital media on journalism and news gathering.

Andrew Cohen, president of the institute and one of the panellists, told The Epoch Times that while the Internet and social media have made a proliferation of news and information available, “the concern is that they’re not always accurate.”

In particular, the danger with the new so-called “citizen journalism” is that some people are calling themselves journalists or are seen as journalists simply by virtue of having a camera or microphone on the scene and being the first to post a report on YouTube, Twitter, or their blog.

Yet they have never studied journalism, they may not have checked their facts, or they may be advocates or have an opinion, said Mr. Cohen, an award-winning journalist, an author, and a journalism professor at Ottawa’s Carleton University.

Mr. Cohen encourages people to be skeptical and to ask questions, such as, “Are all points of view covered in this story?” “Are all the facts there?” “Is there balance in the story?”

“The Internet is a wonderful tool of democracy,” he said. Moreover, “it’s positive that people are engaged and are reading and learning about other opinions.”

However, he noted that “we have to train consumers to be more careful, more clever, more judicious, more measured in how they choose what they read. That’s the big challenge.”

MNet has found that children as young as 9 understand they can’t always tell whether information they find online is true.

In its 2005 study of youth and Internet use, the largest Canadian survey of its kind, MNet reported that the number one Internet-related subject students in grades 4 to 11 wanted to learn about was “How to tell if information you find on the Net is true or not.”

An effective way of teaching kids how to authenticate information and think critically about media is by having them create their own media content, said Ms. Wing.

This is because all media products are constructed based on a series of decisions and factors. They reflect the producers’ values, understandings, and conclusions, and can involve ideological bents, biases, and stereotypes.

In addition, most of the Web sites kids play on, especially very young children, are commercial sites owned by businesses that must make a profit, so marketing issues have a big role.

“By getting young people to create their own media, they start to understand those decisions that are made. By constructing it, they learn the deconstructing,” Ms. Wing said.

She noted that many powerful and inexpensive tools are at kids’ fingertips today to produce digital media content, such as audio and video podcasts.

“This is a really exciting time to be doing media education in the classroom,” she said.