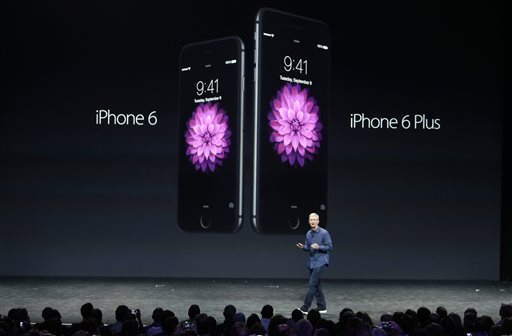 The iPhone 6 release date will be soon after Apple announced the phone this week. Apple CEO Tim Cook introduces the new iPhone 6 and iPhone 6 Plus on Tuesday, Sept. 9, 2014, in Cupertino, Calif. (AP Photo/Marcio Jose Sanchez)
Tech

EE has been named as one of Apple’s partners in the United Kingdom, with the company to be selling the phone in the country along with Vodafone and Three.

Wi-Fi Calling will allow people to call when they have a Wi-Fi connection, regardless of whether they have a cell tower signal.

The handoff between the two networks is seamless, according to Apple. T-Mobile is the partner in the United States.

The iPhone 6 will feature a 4.7-inch screen, up from the 4-inch screen on the models released in each of the previous two years. The iPhone 6 Plus will boast a 5.5-inch screen and other improvements, including longer battery life, that will cost an additional $100. The screen resolution on the Plus version will be sharper than previous iPhones.

With the larger screen comes a new horizontal view of the home screen. Usually, icons are stacked vertically, even when the phone is turned horizontally. App developers will also have new tools to rearrange their content to take advantage of that larger screen.

Apple says the new phones will be faster and have better battery life than previous versions. The phones will also have a barometer to estimate how much users climb stairs, not just how far they walk or run.

The resolution on the camera is staying at 8 megapixels, while rival Android and Windows phones have been offering up to twice that amount. However, the number of megapixels is only one factor in what makes a good photo. Apple says it is putting in new sensors for better shots.

Apple is also improving a slow-motion video feature by allowing even slower shots. The camera will be able to take 240 frames per second, double what’s in last year’s iPhone 5s. Normally, video is at 60 frames per second.

Starting prices will be comparable to those in the past — $199 with a two-year contract for the iPhone 6 with 16 gigabytes of storage.

However, the step-up models will have double the memory as before — $299 for 64 gigabytes and $399 for 128 gigabytes. The iPhone 6 Plus phones will cost $100 more at each configuration.