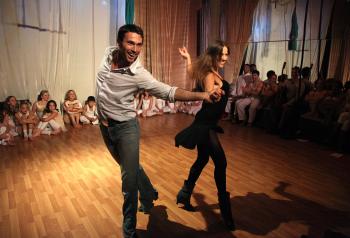 Edyta Sliwinska, pictured above with her husband Alec Mazo, confirmed she is leaving 'Dancing With the Stars.' (Angela Weiss/Getty Images)
Entertainment

Edyta Sliwinska Gives Reasons for Leaving ‘Dancing With the Stars’

Alex Johnston
View profile
Follow
biggersmaller
Print
Edyta Sliwinska, a professional dancer on ABC's smash hit show Dancing with the Stars, announced she is leaving the show on Monday, later adding that she wanted to clarify why she is doing so.

After TMZ reported on her having a “major disagreement” with the producers of the show, Sliwinska confirmed that she was leaving and later said information in the report was incorrect.

“I decided it's time to move on with my life, pursue other projects and finish school,” the 29-year-old Polish professional dancer said via her Twitter account, adding that her school major is in communications and media.

“I never said anything about 'major disagreement with production' of DWTS,” she added. “We have different views but that's about it. I'm grateful to the show but my life can't be limited to DWTS.

Sliwinska noted that she always enjoyed performing in front of the audience.

"I'm pursuing my education and looking forward to other projects that perhaps you will hear about, but my main goal is to finish my degree and start building my family," she said on her Facebook page.

TMZ reported that Sliwinska may return to the show when its next season starts as she is contractually bound. The show will start its 11th season on Sept. 20.