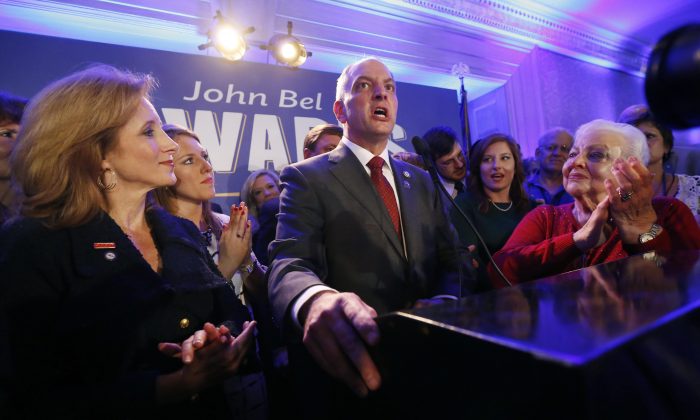 Edwards to Be Sworn in Monday as Louisiana’s 56Th Governor

Edwards follows term-limited Republican Bobby Jindal into office, inheriting a budget mess that will require the Democratic leader to work with a majority GOP Legislature.

The new governor is expected to call for bipartisanship and cooperation in his speech at the inaugural ceremony, to be held on the steps of the Louisiana Capitol.

Six other statewide elected officials also will be sworn into office Monday with Edwards.

The 144-member Louisiana Legislature also will be seated earlier in the day.

Edwards, a West Point graduate and former Army Ranger, is the first Democrat to win a statewide elected office in Louisiana since 2008, after defeating one-time powerhouse U.S. Sen. David Vitter, a Republican who entered the race as the front-runner.

A little-known member of the state House from rural Tangipahoa Parish, Edwards’ chance of a win was deemed slim when he announced his campaign plans more than two years ago, not with a formal kick-off event but in response to a question on a radio talk show.

He built a campaign operation that mainly relied on family and close friends, as political prognosticators and those within his own party initially gave him little chance of success.

But conventional wisdom that a Democrat couldn’t win in a state where voters tend to choose Republicans for the top jobs helped Edwards keep better-known Democratic candidates out of the race. Then, he benefited from an open primary in which he largely escaped attacks while the three main Republican contenders slammed each other and weakened Vitter going into the November runoff election.

With anti-abortion and pro-gun stances and a military resume, Edwards downplayed his Democratic roots and positioned himself as a moderate who would work across party lines. He capitalized on voters’ unease with Vitter and the senator’s 2007 prostitution scandal. Edwards built a campaign on personal integrity, repeatedly saying in speeches and debates: “I will always be honest with you. I will never embarrass you.”

Edwards will open Inauguration Day with Mass at a Catholic cathedral in downtown Baton Rouge, closed to the public and the media. His swearing-in ceremony will begin a few hours later, with LSU play-by-play announcer Jim Hawthorne acting as master of ceremonies. The incoming governor will place his hand on the family Bible to take the oath.

Prayers, music and pageantry will be a part of the event, themed “Louisiana First.” Edwards will be heralded with a 19-round of cannon salute and an F-15 flyover. Edwards’ close friend, state Rep. Jack Montoucet of Crowley and his family, will sing “Amazing Grace” in French.

At least four of Edwards’ predecessors will be on hand: Jindal and former Govs. Edwin Edwards, Buddy Roemer and Kathleen Blanco. An estimated 11,000 invitations were sent for the ceremony, which also is open to the public. Edwin Edwards and John Bel Edwards are not related.

A black-tie ball will be held Monday night at a Baton Rouge local film studio, an invitation-only event.