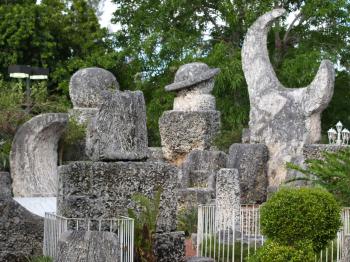 The enigmatic Coral Castle is made of huge rock slabs totaling over 1100 tons, yet one man cut, quarried and set the stones himself. (Photo taken by Christina Rutz)
Beyond Science

How were monuments such as Stonehenge, the Great Pyramids of Giza, Sacsayhuaman fortress and other ancient monuments built?  Many scientists believe that in some cases workers numbering in the tens of thousands were needed simply to move the massive stones to the construction site.

However, a small Latvian man insisted that these ancient structures were assembled with much more ease than we might imagine, using a building secret that has been lost to the ages. He even claimed to be able to put these techniques into practice at the mysterious Coral Castle.

At 25, Edward Leedskalnin was engaged to marry a woman 10 years his junior—Agnes Scuffs, who he affectionately nicknamed his “sweet sixteen.” Lamentably, the night before his wedding, Edward’s bride changed her mind, never to return to his side. Surprisingly, Leedskalnin went on to construct a truly magical castle in memory of his lost love.

Following his heartbreak and a bout of tuberculosis, Leedskalnin departed from his native Latvia, toward the United States. He set up in Florida City, and there he was able to realize one of the more impressive (and enigmatic) construction efforts ever undertaken by a single man: “Coral Castle” or as Leedskalnin called it, “Rock Gate Park.”

Erected entirely of stone—that Leedskalnin quarried, cut and set himself—the grand edifice is constructed of gigantic slabs, some of which weigh up to 30 tons. Through twenty-eight years of solitary work, and with only the aid of simple tools of Edward’s own design—a tackle and chain hoist made from old telephone poles—Coral Castle became a reality.

Yet, instead of sharing his mysterious building methods with the world, Leedskalnin made every effort to protect the secret behind his stone moving feats. Many have speculated on his process, but no one has been able to recreate the seemingly effortless movement of such large stones.  According to one legend, children spied on Leedskalnin one night and witnessed large stone slabs floating in the air like “hydrogen balloons.”

In 1936, Leedskalnin wanted to move his entire structure to nearby Homestead, and hired a truck to carry the stones—the only time he enlisted help in his endeavors.  Always intent on protecting his secret, Leedskalnin insisted that the driver leave his truck at the site overnight, so that he could load the huge slabs himself.  The driver doubted his claim; but as promised, the next day Leedskalnin had the stones stacked on the large trailer, ready to transport.

The construction of Coral Castle is riddled with mystery. How could one person move over 1100 tons of large stone slabs needed to build this massive structure? While Leedskalnin never explicitly disclosed his building secrets, he did leave writings suggesting a series of experiments using magnets, hinting that his methods came through study of the earth’s magnetic fields. Did Leedskalnin, as some have claimed, discover how to overcome gravity?

Leedskalnin was evasive when directly questioned about making Coral Castle, but he claimed to possess techniques once known by ancient builders—techniques like those used to construct the great Egyptian pyramids. He even teasingly referenced that the method was quite easy, once you knew the secret.

One of the more miraculous features of Coral Castle is the nine ton stone block used as a gate at the entrance of the castle.  Leedskalnin set this large stone with such precision that it could be easily opened with the gentlest push.  In 1986, over thirty years after Leedskalnin’s passing, the gate had to be repaired and the job required a six man crew with a twenty ton crane to move the large stone slab.  Yet despite the extra muscle, this group of men was still not able to set the gate with the same precision as before.

The interior of the Coral Castle itself is a display of exquisite artistry and engineering marvels. It is officially considered an historic monument, and has been transformed into an open museum for all who are curious, and wish to try their hand at unveiling the mystery of how the eccentric Latvian lived and worked. Sets of tables and chairs decorate the coral garden, while staircases and sundials are set with minute precision—a testament to Leedskalnin’s mysterious abilities.

It is said that Leedskalnin was never seen working on his Coral Castle, though neighbors reported a light in his workshop tower accompanying strange singing late into the night. What sort of technology did Leedskalnin use and why would he want to keep such a miraculous discovery a secret?  Did he in fact possess the same building secrets employed in the ancient world?  We are merely left to speculate, as Leedskalnin offers only the clues of the structure itself, taking the methods for building it to his grave.