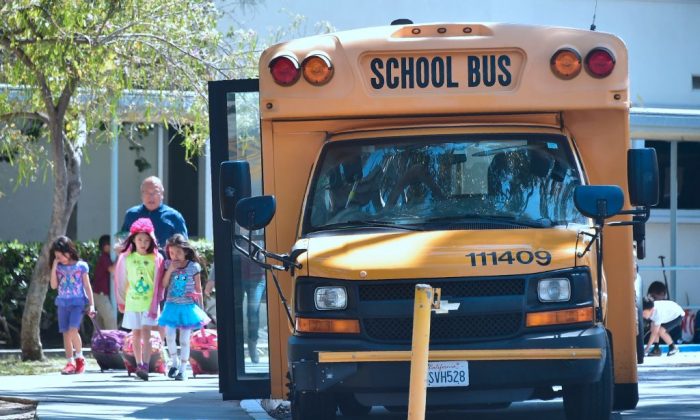 With California’s K-12 education consistently ranked below average or even near the lowest in the nation, parents, educators and local officials have increasingly expressed their concern with the Golden State’s public schooling.

A report released earlier this year by the California government revealed the names of the lowest performing schools in the state. These reports are mandated by the Department of Education under the 2015 Every Student Succeeds Act, and the named school’s districts are eligible for $150,000 in federal aid a year, in exchange for improving the schools’ standards.

The current federal Department of Education, led by Secretary Betsy DeVos, has taken a more hands-off approach in addressing these improvements. This is reflective of the Every Student Succeeds Act, a bipartisan law that was overwhelmingly approved by the Republican-controlled Senate and signed by former President Obama. This law replaced the Bush-era No Child Left Behind Act and allowed states more flexibility with standardized testing and accountability practices.

In releasing the report, California seemingly decided quietly publish the names of these schools to encourage improvement, while not publicly labeling the schools as “bad” or “poor” quality.

The Epoch Times spoke with Williamson “Bill” Evers, former assistant secretary for the Office of Planning, Evaluation and Policy Development in the United States Department of Education from 2007 to 2009. Evers currently serves as a research fellow at Stanford University’s Hoover Institute.

Evers also helped shape California’s education curriculum during his time as a commissioner on the California State Academic Standards Commission, where he served from 1996 to 1998 and again in 2010. He helped write the California standards for math and English, which at that time were among the highest in the country.

“Before Common Core, California made an effort to try to become internationally competitive in math. If you look at South Korea, Taiwan, Singapore, Japan and so forth,” Evers explained.

Evers went into detail about the improvements that the state made during his tenure on the commission and how it helped minority students in the state improve their academic performance.

“Over 15 years, we brought up California to getting two-thirds of the kids to be in Algebra 1 in the 8th grade,” he said. “This was a huge boost for Latino and African American kids. They had four-fold, six-fold increases in the numbers for Algebra 1 in the 8th grade. This is essentially the position in Singapore and so forth. Now I’m not saying that every kid learned Algebra 1 perfectly in 8th grade, but it was pretty good. Most [academic initiatives] aimed at Latino and African Americans don’t have any effect. This had an effect, because we brought all these kids to this level.”

Evers went into detail as to how the introduction of Common Core standards essentially reversed the progress the state commission made on academic performance in public schools.

“So, Common Core, instead of having Algebra 1 in 8th grade, has it in 9th grade, so they washed out all these gains. This is something that became obvious in the early years after Common Core, not ten years later.”

Sandra Stotsky, a professor emerita in the Department of Education Reform at the University of Arkansas, also spoke on this issue and how prior to Common Core standards, California’s math requirements were above the national average.

“The pre-Common Core California standards expected most students to be ready for Algebra I by eighth grade and provided the standards for Algebra I in grade 8. Common Core doesn’t. So, students fall behind,” she said in an op-ed for the New Boston Post.

According to U.S. News and World Report’s 2018 ranking for K-12 education, California ranks 37th out of 50 states for quality of education. Education Week, a national magazine that rates the quality of education of each state, gave California a C on its state report for 2018. The state ranked 49th in conditions that help children succeed, 32nd in school finance, and 22nd in achievement.

California has shown minor improvements in its K-12 education in the last couple years. According to Edsource.com, California’s 8th-grade reading has slightly improved over the past decade, jumping from 10 points below the national average in 2007 to 3 points below in 2018.