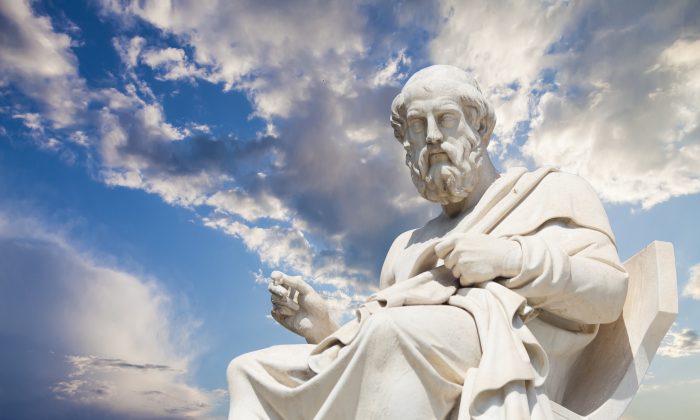 A statue of Plato from the Academy of Athens. (Anastasios71/Shutterstock)
Education

Educator Jeremy Tate: The Classics Can Help Us Build a Better Future

Do we value self-control or indulgence? Do we value kindness and generosity or competitive self-interest? These are the questions educator Jeremy Tate asks us to think about and then suggests we project them on a canvas as large as our nation itself.  Do we want to raise a nation of citizens with the core value of decency or not?

Tate, co-creator of the alternative college preparatory exam called the Classic Learning Test (CLT), believes that classic texts by our greatest Western thinkers offer us a way to develop character in our young.

According to Plato, Tate said, education once focused on the type of person that resulted from it. “Education should be like a sort of boot camp in the sense that you come out with discipline and ready to be productive and fruitful, as well as encouraged to pursue virtues,” he said in a phone interview on July 19.

Is our educational system teaching our young to be selfish?

Although Tate does not prescribe certain virtues for our youth, he looks first to ancient Greece and the cardinal virtues set forth in Plato’s “Republic”—those of justice, prudence, temperance, and courage, which were further elucidated by Thomas Aquinas. These, when encouraged in the young, would build the best citizens, Plato believed.

According, again, to Plato, “The object of education is to teach us to love what is beautiful,” Tate said, though he suspected we would be hard-pressed to find a high school student today who shared that definition.

Another Philosophy of Education

We are disconnected from the 3,000 years of our own culture’s history, Tate believes, and our philosophy of education has dramatically changed since Plato put forth his ideals.

The Greek and Renaissance models of education posited a scholar who would pursue both knowledge and virtue in order to gain wisdom. Wisdom, self-betterment, was the aim.

Opposed to this philosophy, education today relies on a utilitarian model, wherein we prepare students for economic opportunities.

The Scholastic Aptitude Test (SAT), for example, aims in its very latest revision to even the playing field for the economically disadvantaged.

The problem with this approach, Tate said, is that students become complacent and less willing to learn unless they can see what is to be gained. But if a student is always taught to ask “What can I get out of this?” we are, actually, teaching that student to be selfish.

Is our educational system teaching our young to be selfish?

Education has increasingly put the child rather than our culture and heritage at its center, which has come to be called child-centered learning. Tate recalled psychologist Jean Twenge’s influential 2006 book “Generation Me,” which shows the outcome of this philosophy of education as its disturbing subtitle reveals: “Why Today’s Young Americans Are More Confident, Assertive, Entitled—and More Miserable Than Ever Before.”

In chapter 3, the book examines the 2005 revision of the SAT, with its then-new component of an essay. A Kaplan study guide for the test coached prospective students by stating that the essay would be child-centered, would ask only for the student’s opinion: “It’s not important what other people might think, just what you think.”

Twenge believes the directions in the SAT guide are a culmination of years of educational policies that have directed youth to consider their own perspectives and own feelings as paramount. Updated in 2014, Twenge’s text expands on her points; the problem has not gone away.

Tate compares Twenge’s coinage of “Generation Me” with his grandfather’s world summed up by Tom Brokaw’s “The Greatest Generation”—an era when the Great Depression and World War II demanded sacrifice, first for necessity’s sake and then for the common good.

We have tossed out not only the worst of Western culture but also the best.

The contrast between the two is striking, Tate says. One learned the value of self-sacrifice and, only a few generations later, the other, self-indulgence.

Moral relativism has arisen out of the view that all cultures, all perspectives, are equally important. No virtue has dominance over another, and this “value neutral” philosophy has left American culture hollow, without a moral center of its own.

So, the wholesale adoption of cultural relativism leading to moral relativism in education, and a child-centered approach that focuses primarily on children’s perspectives, has not only tossed out the worst of Western culture but also the best.

Tate points to an article by Notre Dame professor Patrick Deneen, “How a Generation Lost Its Common Culture.” In considering his students today, Deneen states that our education system has not failed in producing young who know nothing about their heritage, but has superbly achieved that purpose: “What our educational system aims to produce is cultural amnesia, a wholesale lack of curiosity, history-less free agents, and educational goals composed of content-free processes and unexamined buzz-words.”

If you ask students, Deneen says, questions about Western civilization like “Who fought in the Peloponnesian War? Who taught Plato, and whom did Plato teach? … Why does the Magna Carta matter? … What did Lincoln say in his Second Inaugural?” they would stammer and be unable to answer.

Looking to the Future by Keeping the Best From the Past

Tate has worked first as a college counselor and then as a director of a small SAT preparatory company. In that position, he met many frustrated parents who felt that the SAT was at odds with the values they wanted to instill in their children. So Tate began to search for alternative tests to meet the needs of these parents, some home schooling, some Christian, and some simply looking for a way to educate their children in the Western tradition.

When Tate couldn’t find an alternative, he decided to create one. He reasoned that if a college-level exam based on aptitude and virtues were implemented nationwide, it would have an effect on education from the top down.

Tate co-founded the CLT along with David Wagner in the fall of 2015 as an alternative college entrance exam. Helping develop the exam was the Institute for Catholic Liberal Education, which is now bringing the test to the attention of colleges across the nation. In the very short period of time since the idea struck Tate, the exam has been pulled together and has garnered support from 20 colleges.

The exam asks students to make inferences based on texts by thinkers from Plato to Martin Luther King. It challenges “students to analyze and comprehend texts that are not just concerned with one small, narrow topic but rather represent the scope and complexity of Western tradition,” the website explains. For example, some of the practice exam questions on the site are based on a C.S. Lewis text that talks about the “Inner Ring.” A bit mysterious, the Inner Ring is described as an all-important and highly desirable place, but ultimately morally questionable. Through inference skills, a student would discern that this passage describes a clique, a social circle with a goal to keep out others.

This question would clearly engage high school age test-takers and leave them with something to think about after the exam, Tate said.

As the exam bills itself: “The CLT is not merely another college entrance exam, it is a college-maturing exam.”

In leaving value neutral-exams behind, Tate hopes that by re-introducing the best minds of the past to those of the future, our culture can regain its moral center.