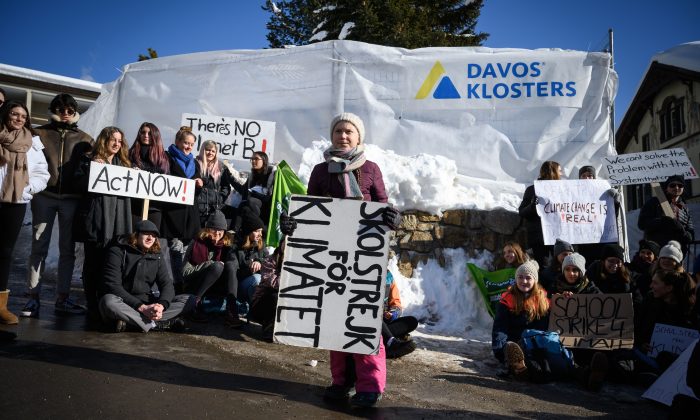 Educational Malpractice on a Massive Scale: The Exploitation and Indoctrination of Children

During the World Economic Forum conclave in Davos, Switzerland, at the end of January, more than 60,000 students around the world boycotted their classes to urge world leaders to do more about climate change, according to a report from British newspaper The Guardian.

While teenagers demonstrating peacefully may seem innocuous, if you look beneath the surface, the view is disturbing, scandalous, and ugly.

I commend kids for caring about their world. And I strongly believe there are times when children can teach their elders valuable lessons. Not only can they teach us beautiful lessons of kindness and forgiveness, they can also teach us practical knowledge that we lack. Think about how many adults turn to youngsters for help handling their digital devices.

What is so ominous about the kids’ climate protests is the cynical way in which their elders have exploited them. The kids acted in good faith on the basis of what adults—particularly their schoolteachers—have taught them about climate change. These caring young people have been taught (actually, mistaught) the simplistic and fallacious dogmas of politicized climate change “science”—that CO2 is the grand regulator of global temperatures and that, in the reckless words of Rep. Alexandria Ocasio-Cortez, “the world is going to end in 12 years if we don’t address climate change.”

I’ve repeatedly rebutted the assertions of the climate-change narrative of the global political elite (such as here, here, here, here, here, and here), but the reality of these recent (and upcoming) student protests is how those poor kids have been duped and exploited by their schools. What business do the teachers of the world have in teaching wildly speculative theories as fact, and influencing students to become activists in a particular ideological and political movement?

My colleagues and I have lamented that the students coming into our college classrooms have had increasingly poor writing skills over the past few decades. One reason for this is that students are being taught climate-change hokum instead of the basic skills that would serve them so well in their adult careers. Education should teach youngsters how to think rather than indoctrinate them into what to think.

And what are these youthful climate-change protesters really protesting? Look at what the 16-year-old Swedish girl who started the strike movement said: “Some people—some companies and some decision-makers in particular—have known exactly what priceless values they are sacrificing to continue making unimaginable amounts of money. … I want to challenge them into real and bold climate action, to set their economic goals aside and to safeguard the future living conditions for humankind. I ask you to stand on the right side of history.”

The anti-capitalist bias in these words is obvious. What she is really protesting isn’t global warming, about which humans can do so little, it’s markets and profits—in short, capitalism. And this goop about “the right side of history” is pure Marxist claptrap.

The educational malpractice of indoctrinating children into being climate-change warriors (a variation of the Hitler Youth) has been deliberate. Indeed, it has been an elaborate, thoroughly thought-out strategy of the left for decades. Progressives, socialists, and communists, have never been shy about expressing their intention to use schools for indoctrination.

Marx’s 10th point in his 10-point platform for how to achieve socialism by the democratic route was for the state to control the schools.

The late Italian Marxist Antonio Gramsci wrote, “Socialism will triumph by first capturing the culture via infiltration of schools, universities, churches, and the media by transforming the consciousness of society.”

UNESCO, the U.N. bureaucracy that focuses on children, wrote in its book called “Education for Sustainable Development Toolkit” that “Children are the key to changing society’s long-term attitudes to the environment.”

A report in Education Week in 2011 noted that students in Maryland had to demonstrate that they had learned the mandatory green curriculum in order to graduate. Another 2014 report “found that global warming is being taught in almost every area of the [UK] curriculum.”

As the report’s authors write in their conclusion: “The fact that children’s ability to pass their exams—and hence, their future life prospects—appears to depend on being able to demonstrate their climate-change orthodoxy is painfully reminiscent of life in communist-era Eastern Europe or Mao’s China.”

I mentioned Ocasio-Cortez above. She is young enough to have gone through her entire academic career subjected to green propaganda, so her alarmism shouldn’t surprise us. Even where I lived in the hinterlands, the green curriculum has been in place for several decades.

Here’s a personal story: In the late 1990s, I served for four years on a curriculum advisory committee for my local school district. I examined the environmental curriculum in detail and discovered numerous errors. When I provided corrections to the curriculum coordinator, she looked annoyed when she accepted my report and refused to make any changes in the curriculum.

As if the hijacking of education by ideologues to indoctrinate children isn’t reprehensible enough, there are more troubling aspects to green indoctrination in schools. The first is the psychological damage inflicted on innocent children. Many have suffered from anxiety and depression due to the lurid descriptions included in many climate-change predictions. The second is the threat to families.

Part of the green message drummed into impressionable children is that it is up to them to teach their ignorant or obtuse parents the “truth” about climate change. Lenin once told the Soviet commissars of education in 1923: “We must teach our children to hate their parents if they are not communists.”

Well, the greens aren’t using the word “hate,” but they are suggesting to kids that their parents need to be corrected.

Al Gore told children a decade ago that while their parents undoubtedly mean well, they don’t have access to the latest “scientific” information that the students will be given in school. In other words, believe schools, and not your parents, if they doubt the alarmist scenario.

How fiendish and cruel! Teachers are putting children in a position where they have to choose between respecting and trusting their parents or respecting and trusting their teachers. The teachers have the advantage, because they have been pushing the same green message for years. I wonder how many young Americans are going to be alienated to various degrees from their parents because of disagreements about climate change.

For schools to take a side on controversial issues (besides being a departure from the correct purpose of school) is unfair to families. And picture what it must be like for those youngsters who realize at some point how they have been systematically deceived by their teachers: Can you imagine how hurt and betrayed they are going to feel?

Teaching the green agenda of climate alarmism in schools is child abuse. It’s diabolical, wrong, and un-American. It must be stopped.