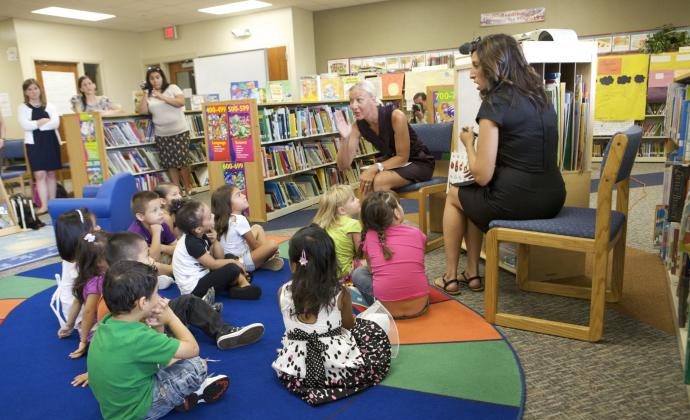 Children in a classroom at Carver Community School in Des Moines, Iowa. (Courtesy of U.S. Department of Education)
US

WASHINGTON—While jobs and the economy are headliner issues for most Americans—especially during this year’s presidential race—education will likely play a significant role in general elections, according to a recent forum conducted by Beltway experts.

With long-term unemployment a reality in many communities, Americans increasingly see the relationship between education and the economy, says David Winston, president of the D.C. research and strategy company the Winston Group.

Speaking at an American Enterprise Institute forum on education Feb. 1, Winston said his research indicated education had moved up on par with health care and the national debt as an issue of concern.

“People are beginning to realize that one of the outcomes of having an education system that is not producing what it needs is that you are seeing skilled work going overseas, because other countries have better labor pools and have really skilled workers,” Wilson said.

Winston, a former director of planning for House Speaker Newt Gingrich, said the topic of education will start to play “a significant role” in the general elections.

Education, however, had received little attention in the GOP campaign, with Winston warning that candidates will struggle to find the right tone in dealing with the issue.

The AEI forum touched on a range of key education issues in this election year, ranging from the reauthorization of the No Child Left Behind Act (NCLB) to the president’s State of the Union vision for containing college tuition prices and raising the high school dropout age to 18.

The forum heard that the last time education featured as a major election issue was in early 2000, when former President George W. Bush revised the Elementary and Secondary Education Act (ESEA) to introduce the NCLB in 2002.

No Child Left Behind, which was then co-authored by present House Speaker Rep. John Boehner (R-Ohio) and George Miller (D-Calif.), plus Sens. Edward Kennedy (D-Mass.) and Judd Gregg (R-N.H.), focused on higher standards and accountability, with the goal to have 100 percent of students reach proficiency in math and reading by 2014.

Without dictating how individual states go about that, the act requires states to develop and implement their own assessments of students’ basic skills in order to receive federal funding.

The law was also intended to ensure that educational resources were directed at sub groups and poorer areas, but states have been struggling to meet the proficiency demands, and many expect to fall short of the requirements this year.

The Obama administration has proposed changes to NCLB, with the president saying in his State of the Union Address that he would like to “grant schools flexibility: to teach with creativity and passion; to stop teaching to the test; and to replace teachers who just aren’t helping kids learn.”

In the meantime he has introduced a waiver program for which a number of states are presently being assessed.

The Department of Education introduced Race to the Top (RTTP) competitive grants for states in 2009. Designed to encourage improvements and innovation, states are awarded points for reaching certain performance-based standards for teachers and principals, implementing data systems for developing educational reforms.

Peter Cunningham, assistant secretary for communication at the department, told the forum that providing incentives through RTTP, plus increased transparency and a “bullypit” process of shining a spotlight on issues, had proven to be effective strategies in encouraging states to attain educational goals, adding, “imposing sanctions does not.”

Cunningham said the waiver programs provided opportunities to deliver resources where they were most needed, “particularly to the kids most at risk,” and he hoped to see those programs come to fruition through 2012.

While there is largely bipartisan agreement for educational reform, Katherine Haley, assistant to Speaker Boehner, said there was mixed support among Republican congressmen for some of the Obama administration’s initiatives.

Regarding RTTP grants, Republicans were concerned that the federal government was “compelling” states with “carrots” to adopt certain standards. The initiative was still being discussed, she said, noting that some representatives favored the proposal and had signed on to governor letters supporting RTTPs.

Republicans were also concerned about threats to state powers, she said, saying they did not believe that U.S. Secretary of Education Arne Duncan had the authority to grant waivers.

Joe Williams, of the Democrats for Education Reform group, concluded on a positive note for 2012, saying the increased availability and accessibility of data since 2000 had “changed the conversation and allowed all sorts of different coalitions to form … in terms of getting things done on the ground.”