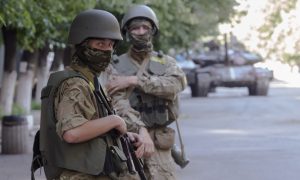 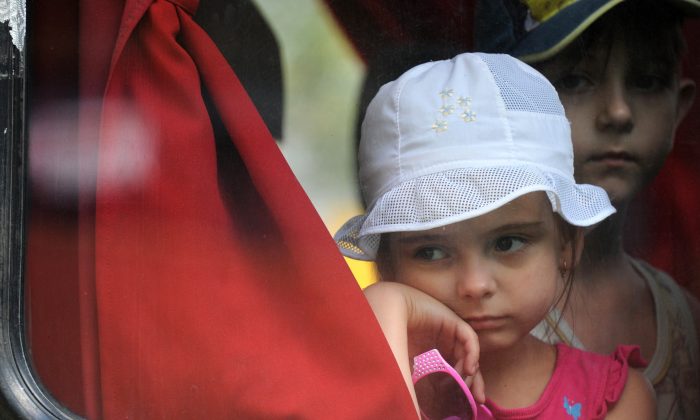 Children aboard a bus leave for Russia on July 16, 2014 in Donetsk. (DOMINIQUE FAGET/AFP/Getty Images)
Crisis in Ukraine

Education System Failed to Unite Ukraine, but There Is Still Hope if Diversity Is Embraced

Ukraine’s recent political crisis, a pro-Russian separatist movement and violence in the East has yet again drawn attention to the competing loyalties of Ukrainian citizens. Ukraine gained statehood in 1991 after the break-up of the Soviet Union, but the nation-building process for a new generation has been difficult. The country is politically divided along ethno-linguistic lines. Russian speakers, many of them ethnically Russian, are clustered in the eastern regions.

The regional diversity in Ukraine has been underscored by a centralised and what some have called “nationalising” system of education that has sought to overcome rather than embody the country’s cultural complexity. The citizenship curriculum and textbooks used to teach it have aimed to define nationality not solely based on residency and citizenship but also on cultural factors.

Ukraine’s ministry of education publishes its curriculum plans for each school subject. In addition, it supervises the process of the adoption of textbooks to ensure that the “official” understanding of subjects such as history are reflected in the textbooks used across the country. These textbooks are also available in the Russian language, which has been established as a medium of instruction in the majority of schools in the East.

To see whether the post-Soviet textbooks have succeeded in creating that national identity, I spent some time in 2009 speaking with young people raised and schooled in an era of Ukraine’s nation-building.

In our research on youth citizenship identities in Ukraine, 180 students from urban and rural secondary schools in the East and in the West of the country took part in 56 focus groups.

All participants were educated in post-Soviet Ukraine and identified as Ukrainian. But they also described Ukraine as a linguistically, culturally and politically divided nation.

There were differences between the regions: students in the West felt like “real” Ukrainians due to being “Ukrainian-speaking” and living in the region where “Ukrainian culture is preserved”. Some said that they were taught in school that the West “was the first to start fighting for the independence of Ukraine”. As a result, the young people in the West tended to conclude: “We are a bit more Ukrainian.”

Students in the East had a different way of looking at their national identity, in light of not being Ukrainian native speakers. They drew on civic and emotional forms of belonging, saying that “Ukrainianness” could be defined as being “for their country”, “living in the country”, “respecting the country”, “doing something for the country”, and “having rights and duties”.

A recent public opinion poll by the Democratic Initiatives Foundation in Ukraine has confirmed this trend. The data suggests that the majority of young people under 30-years-old living in the East want to live in a united Ukraine, and have European aspirations for the country. This political ambition could unify the country in the years to come.

The tendency to present the Ukrainian language as the main trait of Ukrainian identity generated much resentment among young people in the East. The people we interviewed discussed the existing preconceptions about different regions and how these affected their identities. They were acutely aware that people in the East are viewed in other parts of Ukraine as inauthentic and unpatriotic Ukrainians, mainly because they speak Russian.

Previous research has also shown that schoolchildren in Ukraine’s three Eastern cities of Luhansk, Kharkiv and Sumy felt the need to justify their right to belong in Ukraine due to their “subordinate” Russian-speaking status.

The danger here is that feelings of exclusion and rejection within the community could create a disaffected and civically disengaged population.

The Ukrainian approach to education in the years since independence has been ethnocentric, built around the importance of Ukrainian national culture. Our research suggests the need to refocus on accommodating the diversity that is found within the Ukrainian nation. Children need to be taught to value hybridity in their culture, not purity, and recognise that Ukrainian identity may be experienced differently by different people.

Young people in the East should be aware of the positive – and Ukrainian – aspects of their region. But students in the rest of the country should also be taught to appreciate the diverse and mutually-enriching composition of the nation.

Considering the ongoing conflict in Ukraine, promoting peaceful approaches to difference should be at the top of the educational agenda. Positive peace education should also embrace social justice and youth development. The goal should be to build peaceful communities by educating democratically active and socially conscious citizens.

Antonina Tereshchenko receives funding from the British Academy. This article was originally published on The Conversation. Read the original article.