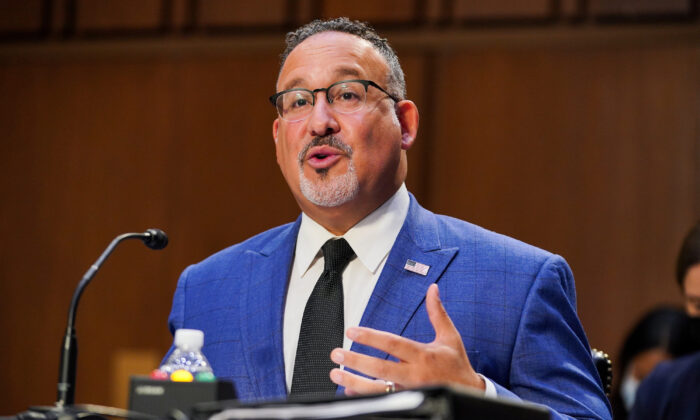 U.S. Secretary of Education Miguel Cardona refused to say at a congressional hearing that parents are the “primary” stakeholders in their children’s education.

Near the end of his Sept. 30 hearing before the Senate Committee on Health, Education, Labor, and Pensions, Cardona was asked by Sen. Mike Braun (R-Ind.) about what he thinks of parents who want to be more involved in the education of their children after the first school year amid the pandemic.

“Do you think parents should be in charge of their child’s education as the primary stakeholder?” Braun asked.

“I believe parents are important stakeholders,” Cardona replied. “But I also believe educators have a role in determining educational programming.”

“I think that’s going to be a little out of focus what I think you’re going to find across all elements of education,” an unimpressed Braun said, “Since they pay the bills, they raise the kids, they probably need to be the primary spokespeople for their own kids’ good education.”

Braun also asked Cardona to rescind a previous comment that parents expressing opposition to mask mandates and critical race theory is “a proxy for being mad that their guy didn’t win.” The comment was publicized by Business Insider in a story about Cardona’s recent road trip to Indiana, where school board meetings have been disrupted by community members protesting against school districts’ masks policies.

“I was a little disturbed, and I want to see if you really meant the comment,” Braun said. “Is that something you’d want to take back?”

“I know across the country our school board meetings are a little intense,” Cardona replied, without directly addressing the statement Braun was referring to. “School boards are unwavering in their support for returning students to school and providing a safe learning environment.”

“What about the statement? Would you want to take that back and not politicize something where I think it’s an honest, sincere difference of opinion across the country?” Braun pressed, but Cardona again declined to directly address his comment.

A similar exchange took place earlier this week during the final debate in Virginia’s high-stakes gubernatorial race between former Democratic Gov. Terry McAuliffe and his Republican challenger Glenn Youngkin. In 2016, McAuliffe vetoed what was known as the “Beloved” bill, a measure that would have made Virginia the first state to require schools to warn parents of sexually explicit content in books and allow parents to block their children from reading those books.

“You vetoed the bill that would have informed parents that they were there,” Youngkin said to McAuliffe. “You believe school systems should tell children what to do. I believe parents should be in charge of their kids’ education.”

In response, McAuliffe said that parents would have had the power to remove books from library shelves if the 2016 bill passed.

“It was not that the parents had the right to veto books … also take them off the shelves,” he said. “I’m not going to let parents come into schools and actually take books out and make their own decisions.”

“I stopped the bill and I don’t think parents should be telling schools what they should teach,” McAuliffe added.