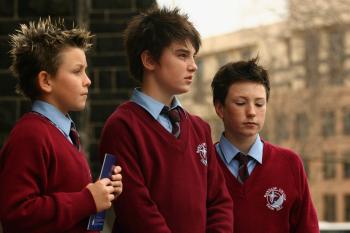 Many year 12 students are not prepared for university, education providers say. (Kristian Dowling/Getty Images)
US

By Sara Matheson
Print
Education providers say schools need more funding and many students’ are not being properly prepared for tertiary courses.

Executive director of Education Strategies, a Melbourne-based consulting group, Kevin Donnelly said many year 12 students are not prepared for university according to anecdotal evidence.

“Surveys of academics at university said they had watered-down first year courses in maths and science because the kids aren’t up to standard,” he said.

Head of Mathematics and Statistics at the University of Sydney Nalini Joshi said she has noticed a problem in the maths department for about six years.

She said although the high schools are more than capable of preparing students for university, some students could be getting poor course advice.

“Many are choosing the general mathematics course without realising that it may not give them the options they need when they get to university,” she said.

Acting head of the Faculty of Education and Social Work, Associate Professor Robyn Ewing said a lack of funding was affecting the resources available to students.

“Some independent schools are much better resourced than public schools and I would say that the differences are growing because of the federal government’s funding policies,” she said.

Mr Donnelly said there is a lot of debate around resources available to schools.

“The teachers union argue that government schools don’t get enough money and non-government get too much.”

Ms Ewing said funding for education needs to be a priority and Australia’s governments have not provided enough especially for early childhood and public schools.

“There are some huge disparities and this is concerning because all children deserve a good education,” she said.

The Government is reviewing school funding agreements for the next four at the end of this year.

Minister of Education Julia Gillard said in a radio interview that private schools, to non-government schools, to Catholic schools would be using the same funding formula.

“But we would really like during the course of putting that agreement together to be focusing on making sure that those kids that come from communities that do it that bit tougher also get a great go at education,” she said.

Mr Donnelly said the government has just given teachers a pay rise.

“They can do that because they simply raise taxes and make more money, but of the 30 to 40 per cent of kids going to non government schools that has to passed on to parents,” he said.

Ms Ewing said people have all sorts of reasons for the choices they make around schools.

“Sometimes it is a perception that non-government schools are better and sometimes this is a misperception,” she said.

Mr Donnelly said schools are not divided just in terms of resources; there are some very wealthy government schools in Melbourne and Sydney.

He said in the Eastern suburbs of Melbourne and Sydney you need to be a millionaire attend some of the public schools because you have to own property in the area to fall inside the zoning.

Mr Donnelly said many parents choose private schools because they want a more disciplined classroom environment for their children.

He said private schools enrolments have increased but the state governments need to increase funding to all schools.

“For many years education quality was measured in terms of how much money was spent. Very recently there has been a focus on learning outcomes, and standards.”

Mr Donnelly said Australia’s curriculum is not as strong as other developed countries.

“There’s a lot of work to do to raise the standard but at the moment we are not looking internationally at the best practice.”